Happy Indian Army Day 2023: It is observed on 15 January to commemorate the brave soldiers and the Indian Army. Get the Army Day Wishes, Quotes, Images, Messages, Slogans, Poems, and WhatsApp Status to share on this Day. And say thank Indian soldiers for their service to the country.

Greetings to all Indian Army personnel and their families on #ArmyDay. The nation salutes their indomitable courage, valour, sacrifices and service. We are proud of the Indian Army’s efforts to keep India safe and secure. pic.twitter.com/I7tqRyULma

Army Day is celebrated on 15 January every year as on 15 January 1949, General KM Cariappa took over the charge of the Indian Army from British General Sir Francis Butcher.  Every year on this day, special parades and military shows are organised. Also, Gallantry awards and Sena medals are awarded on this day. This year, India will celebrate its 74th Army Day on 15 January.

1. Much thanks to You for Serving Our Country and Protecting Our Freedoms!

3. “Let our country link up to look at Army Day to respect or overcome troopers who aim for our pride, our grins… . Cheerful Indian Army Day.”

5. I am proud to be an Indian, Salute Our Soldiers on Army Day.

6. Let us celebrate Indian Army Day by saluting all the army men for their bravery, dedication, and patriotism.

7. Let us come together to celebrate National Army Day to honour our brave soldiers who are the reason behind our pride, our smiles. Happy Army Day 2021!

8. Indian Army Day faithfully helps us to recollect all our legends who stay steadfast to protect us. Happy Army Day 2021!

9. Warriors are not conceived, They are made in the Indian army. Upbeat Indian Army Day.

10. Saluting all the Army men for their bravery, dedication, and patriotism. Happy Indian Army Day!

READ| Why is Army Day Celebrated in India? 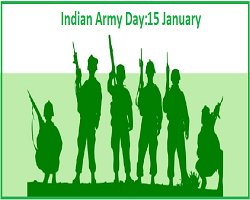 1." Some goals are so worthy, it's glorious even to fail"-  Captain Manoj Kumar Pandey

2. "I shall not withdraw an inch but will fight to our last man and our last round." - Major Somnath Sharma

4. "There will be no withdrawal without written orders and these orders shall never be issued" - Field Marshal Sam Manekshaw

5. "The enemy are only 50 yards from us. We are heavily outnumbered. We are under devastating fire. I shall not withdraw an inch but will fight to our last man and our last round" -- Major Somnath Sharma

6. “Only best of the friends and worst of the enemies visit us” – Indian Army

7. “We fight to win and win with a knockout because there are no runners up in war” -General JJ Singh

8. “If a man says he is not afraid of dying, he is either lying or a Gurkha” - Field Marshal Sam Manekshaw

9. “Quartered in snow, silent to remain. When the bugle calls, they shall rise and march again” – The scroll of honour at the Siachen base camp.

10. "No real change in history has ever been achieved by discussions." - Subhas Chandra Bose

11. "We live by chance, We love by choice, We kill by profession." - Officers Training Academy, Chennai

12. "I regret I have but one life to give for my country." - Prem Ramchandani

13. Do not lament the death of a warrior on the battlefield. As those who sacrifice their lives in the war are honoured in heaven—in honour of KM Cariappa

14.  “You have never lived until you have almost died, and for those who choose to fight, Life has a special flavour, the protected will never know."- Capt R Subramanium, Kirti Chakra (Posthumously)

6. The harder the battle, the more grand the victory.

7. Discipline is the heart of an armed force.

10. Discipline is the soul of an Army.

11. A safe army is better than a safe border. 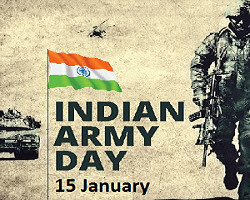 1. I am proud to be an Indian. Salute our soldiers on Indian Army Day!

2. Let us celebrate with pride the service rendered to the nation.
By Our fearless & selfless warriors.
Happy Indian Army Day

3. “Let us celebrate National Army Day by promising ourselves to dedicate our lives to our nation.”

5. We know we are safe because we have our Army protecting us....Happy Indian Army Day!

They enjoy and live in the nature to the fullest
Bath in the waterfall, rain and lake
Eat raw food they get from the trees and forest
Dress up with the fragrance of the natural floret

Army, navy, military are always in their duty
We feel proud of these soldiers
No one can properly describe their situation and life
Everyone can only feel

No one is like them
Everything is in their own destiny
They have the most clear heart
Which have been burnt, hurt and still survived

Salute to these great personalities
And tribute to them
Our flag flies in the top of the sky
And our country is like heaven.

This is a girl of just sixteen years old
Writing her own feeling
It is just endless to describe anything of them
It just depends on one's brain and hearty thinking.
By Ankita Dolai

Salute To The Indian Soldiers
For us they are on border,
Who can't break the order.
Who are always ready to sacrifice,
They are as hard as Himalayan ice.
Salute to the Indian soldiers!

Because of them we are alive,
And, we are secure in Indian hive.
Who always look for command,
Who have only one brand.
Salute to the Indian soldiers!

They fight in Battle without any fear,
There is no security of future year.
Who don't know the difference of day and night,
Who always ready to fight.
Salute to the Indian soldiers!

Who celebrate their festivals with bullets and guns,
We play Holi with colours;
But they play with rifles and guns.
They know only one colour which is 'Blood Red'.
Salute to the Indian soldiers!

We complain for hot and cold day,
While they stay in harsh Siachen everyday.
They are never sure of their own life,
They don't know will they ever meet his daughter, son, and wife.
Salute to the Indian soldiers!

Their village's routes are best friends of their wife.
Why Politicians play with their life?
And, why payment of their life is done by some amount of money,
Is that all our duty towards our great Indian Army?
Again and again salute to the Indian soldiers!
By Vivek Verma

What is the significance of Indian Army Day?

On this day, soldiers of the Indian Army are honoured, who selflessly served the country and set the biggest example of brotherhood. The salute is given to all those brave fighters who have given up everything to protect the motherland and maintain the integrity of the nation.

When did India get its first Army Chief after Independence?

When is Indian Army Day celebrated?

Indian Army Day is celebrated on 15 January every year, because field marshal K. M. Cariappa became the first Indian Army Chief.
Get the latest General Knowledge and Current Affairs from all over India and world for all competitive exams.