Brain Teaser to Test Your IQ: Spot who is from future in 1950s picture within 9 secs!

Brain Teaser to Test Your IQ: In this mind puzzle, try to identify who is from the future in this 1950s picture. Only people with a high IQ can spot the person from the future within 9 seconds!

Brain Teaser to Test Your IQ: This IQ test is a fun way to check your Intelligence Level. Some brain teasers will help in assessing your intelligence level based on the decision you make while looking at the problem. The important task in these puzzles is to scan the problem and arrive at the answer by using your logical reasoning skills. Brain teasers make a simple puzzle more interesting, as these fun IQ Tests are solved with creative thinking. You need to be out of the box for coming on to the solution as the answer would be hiding somewhere in the picture. So, we have come up with an interesting brain teaser where you have to identify in who is from the future in the 1950s image.

Brain Teaser IQ Test: Can you spot who is from the future in the 1950s picture within 9 seconds? In the above image, you need to identify who is from the future in the garden. In the puzzle, there is one person who is different in some way from the other people. The picture shows an era of the 1950s, where a few people are gathered in the garden area and are having a good time. Inside the garden, you can see there are trees. Some people are talking to each other and some are just looking at each other. One kid is hiding behind the tree. A woman is doing touch up on her face. Men and women are wearing clothes from the 1950 era.

Can you spot the Halloween Witch at shop?

You are required to look at the image carefully before answering the question as the answer is quite simple but tricky. As a heads up, the answers to this brain teaser have been given right below the question, so make sure you don’t scroll too far and cheat! 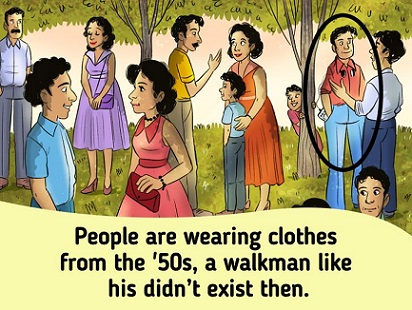 So, the answer to this mental quiz is the man from the future is the man carrying a walkman in his pocket. This brain teaser was a simple test of your intelligence and observation skills. It required lateral thinking to solve the puzzle within a time bracket.

Can you identify the Vampire in the Room?

So, if you have solved this puzzle within 9 seconds, then you must have felt satisfied and happy with your Intelligence level.  These kinds of brain teasers are just another fun way to test your IQ. However, taking an actual IQ test is a good way of knowing your IQ level. So tell us, did you spot the person from the future in this 1950s picture?

Can you Spot Fairy Godmother in the Room?