9 Coastal States of India: All you need to know

Coastal States of India: India has a coastline of 7516.6 km-- 5422.6 km of mainland coastline and 1197 km of Indian islands touching 9 Indian States and two Union Territories. 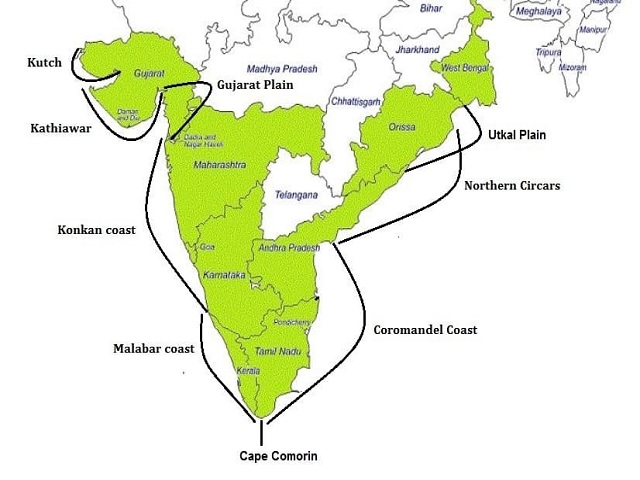 Gujarat has the longest coastline in India which lies in the Kathiawar region of the state and is 1,600 km long. This coastline is surrounded by the Arabian Sea and is dotted with 41 ports-- 1 major, 11 intermediate and 29 minor. Some of the beaches of Gujarat are-- Diu, Dwarka, Porbandar, etc.

The state of  Andhra Pradesh has the second-longest coastline in India and lies in the region of Coastal Andhra. The coastline is 974 km long along with the Coromandel Coast between the Eastern Ghats and Bay of Bengal. This coastline has a rich agricultural land due to the delta-- Godavari Krishna river and Penna. Rice is the main crop of the region following pulses and coconut plantation.

The coastline in the state of Tamil Nadu is the third largest coastline in India and is known as coromandel coast. It is bounded by Utkal Plains in the north, Bay of Bengal in the east, Kaveri delta in the south and the Eastern Ghats in the West. Rice, pulses, sugarcane cotton and peanuts are the main crops of this region. Coconut plantation is done along the coromandel coast. It also has major seaports-- Tuticorin and Chennai, fishing harbours, Marina Beach (largest natural urban beach in India) and Gulf of Mannar Marine National Park.

The state of Maharashtra has a coastline of 720 km and is known as Konkan Coast. It is bounded by the mountain range of Western Ghats in the east, the Arabian Sea in the West, Daman Ganga River in the north and the Gangavalli River in the south. Major agricultural crops of the region are rice, millets, pulses, coconut, etc. The Konkan coastline is dotted with many beaches and is an ideal getaway for the people of Pune and Mumbai.

Kerala has the fifth largest coastline of 580 km in India and is called Malabar Coast. It starts from the south-western coast of Maharashtra and along the coastal region of Goa, through the entire western coast of Karnataka and Kerala and reaches Kanyakumari. It has the Arabian Sea on the west and the Western Ghats on the east. Malabar coast is famous for beautiful scenarios, tea and coffee plantations, beaches, brackish water lakes, etc.

The state of Odisha has a coastline of 485 km long called coastal Odisha or the Utkal Plains. The region is bounded by the Lower Ganges Plain in the north, the Bay of Bengal in the east, the Tamilnad Plains in the south, and the Eastern Ghats in the west. This region has Chilka lake (largest lake in the country), the ancient kingdom of Kalinga, beaches (Chandipur, Gopalpur, etc.) and Bhitarkanika (second largest mangrove ecosystem).

The coastal area of Karnataka is known as Kanara which is 320 km long. The region is bounded by Konkan in the north, the Western Ghats in the east, Kerala Plains in the South and the Arabian Sea in the west. It has several tourist destinations-- Maravanthe, St. Mary's Island Beach, etc. It has three districts-- Uttara Kannada, Udupi and Dakshina.

Goa is the smallest Indian state with a coastline of 160 km long. It is home to many beautiful beaches in the world. It is surrounded by the Indian states of Maharashtra in the north and Karnataka in the east and south, with the Arabian Sea forming its western coast. The soil of Goa is rich in ferric-aluminium oxides and reddish in colour. The soil in inland and along the riverbanks is mostly alluvial and loamy. As the soil is rich in minerals and humus, it is conducive to agriculture.

The coastal plain of West Bengal is located in Purba Medinipur and South 24 Parganas district and has a coastline of 157 km long. The Sundarbans delta of West Bengal is the largest mangrove forest in the world. It is home to a wide range of fauna and is famous for the royal Bengal swamp tiger. Agriculture is the leading economic sector in West Bengal. Rice, potato, jute, sugarcane, and wheat are the major crops of West Bengal.