If you are the one who loves visiting museums and historical places then don't worry, we have got it for you. Visit these 10 museums virtually all at the comfort of your home. 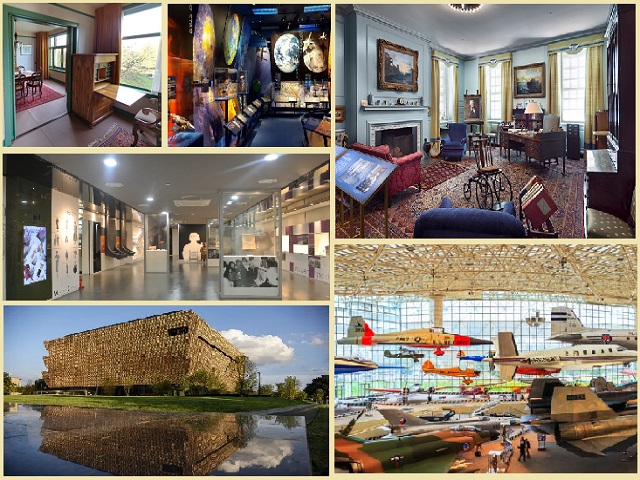 Museums you can visit virtually

To curb and to contain the spread of the coronavirus, most parts of the world are shut and people are staying at home practising social distancing. Amidst this, many websites are launching interesting contents on their websites to keep the people engaged-- Nasa At Home, podcasts, virtual exhibitions, etc. If you are the one who loves visiting museums and historical places then don't worry, we have got it for you. Visit these 10 museums virtually all at the comfort of your home.

1- The US Holocaust Memorial Museum (USHMM)

The United States Holocaust Memorial Museum (USHMM) was established on April 22, 1993, and is the United States' official memorial to the Holocaust. It has over 40 million visitors to date. It provides visitors with a history of Holocaust history.

The museum consists of more than 12,750 artefacts, 85,000 historical photographs, 49 million pages of archival documents, over 2,00,000 registered survivors and their families, 1,000 hours of archival footages, 93,000 library items, and 9,000 oral history testimonies. It also has teacher fellows in every state in the United States and almost 400 university fellows from 26 countries since 1994.

The Terracotta Army was discovered by the farmers digging a water well on March 29, 1974. It is considered as one of the most stunning archaeological findings of the 20th century and is the largest pottery figurine group ever found. The life-sized clay figures belonged to a vast army which was created in 210-209 BCE to protect China's first emperor, Qin Shi Huang in the afterlife.

The mausoleum has approximately 8,000 warriors with chariots and horses. The figures vary in height according to their roles. These figures are arranged in the battle formation.

Inspired by the Google Street View, a Chinese company created a virtual experience where the visitors can 'walk' among the soldiers, view their facial expressions and a lot more.

3- National Museum of African and American History and Culture (NMAAHC)

The National Museum of African and American History and Culture (NMAAHC) was established on December 19, 2003, and was opened on September 24, 2016, with a ceremony by the then-President Barack Obama. The museum is dedicated to African-American history and culture.

The museum has more than 40,000 objects but only 3,500 are on display. The museum has Muhammad Ali's training gear, shards of stained glass from Baptist Church bombing in Alabama, etc.

The Smithsonian Museum of American History houses 1.8 million objects which are in some way or other defines the American experience. It offers more than 100 encyclopedic collections-- photos, videos, texts, graphics. These collections range from the life of Abe Lincoln to voting machines and vintage lunchboxes.

Since its establishment, the trust has acquired and preserved more than 10,000 acres at more than 130 battlefields of the Civil War.

The Museum of Flight was established in the year 1965 and is a non-profit space and air museum. It has a footfall of 5,00,000 visitors every year and is the largest private air and space museum in the world.

The National Aeronautics and Space Administration (NASA) was established on July 29, 1958, and is an independent agency of the US Federal Government. The agency is responsible for space programs, aeronautics and aerospace research.

It has all the past and present programs of NASA, 4K virtual tour of the moon, zero-gravity lab, flight simulators, etc.

Recently, NASA has also launched NASA At Home website for kids and families which will engage them with its discoveries, researches etc. in the form of podcasts, e-books, and more - all at the comfort of their home.

The National Women's History Museum (NWHM) was formed in the year 1996. It is the largest online institution telling the stories of women who helped in transforming the US. It exhibits the contributions of women to the social, cultural, economic and political life of the women in context with the history.

The museum has original documents, artefacts, videos, 360-degree tours, etc. stating the President's assassination attempt to his wartime decisions and more. The library was built under his personal direction in the year 1939-1940 and was inaugurated on June 30, 1941.

Anne Frank House is a writer's house and museum dedicated to Jewish wartime diarist Anne Frank. The museum was established on May 3, 1960. It preserves the hiding place, has a permanent exhibition on the life and times of Anne Frank, and has an exhibition space about all forms of persecution and discrimination.

During World War II, Anne Frank hid with her family from Nazi persecution in the canal house known as Secret Annex. After her death, her wartime diary was published in the year 1947.

These were the 10 museums you can visit virtually amidst the global pandemic. They have 360-degree tours, podcasts, photo galleries, original documents, etc. that will keep you occupied at the time of global crisis.

What is the history of toilet paper and what were the ancient ways of wiping?