According to the Economist Intelligence Unit, India slipped two places to 53rd position in the 2020 Democracy Index's global ranking. Let us read in detail about it.

The Economist Intelligence Unit (EIU) is the research and analysis division of Economist Group which provides a snapshot of the state of democracy across the world.

As we know that India is the world's largest democracy but its 1.38 billion citizens do not seem to be enjoying various freedoms. As per the latest report of the Economist Intelligence Union (EIU), the South Asian giant fell another two spots to 53rd position in the Democracy Index 2020.

India's overall score fell from 6.9 in 2019 to 6.61 in the index. According to the EIU, the democratic backsliding authorities and crackdowns on civil liberties have led to a further decline in India’s ranking on the globe.

How many countries are covered in the Report?

The Democracy Index Report, published by Economist Intelligence Unit, called "Democracy in sickness and in health". The Report has covered 165 independent states and two territories.

In how many categories the Democracy Index is based on?

It is based on 5 categories namely electoral process and pluralism, civil liberties, the functioning of government, political participation, and political culture.

Their scores are based on 60 indicators and within these categories, each country is then classified as one of four types of regime namely “full democracy”, “flawed democracy”, “hybrid regime” or “authoritarian regime”.

Which country is at the top position in the Economist Intelligence Unit's latest Democracy Index report?

Out of 165 independent states and two territories, the Democracy Index classifies 23 countries as "full democracies", 52 as "flawed democracies", 35 as "hybrid regimes" and 57 as "authoritarian regimes".

Why the global average score hit an all-time low?

In recent years it has been recorded in the Democracy Index that democracy has not been in robust health for some time. Its strength was further examined by the outbreak of the COVID-19 pandemic in 2020. For the year 2020, the average global score fell to 5.37 compared to 5.44 in 2019 in Democracy Index. This is the worst global score since it was first published in 2006.

The result of the 2020 report represents a significant deterioration and came out largely but not solely due to the restrictions imposed by the government on individual freedoms and civil liberties that occurred across the world in response to the COVID-19 pandemic. 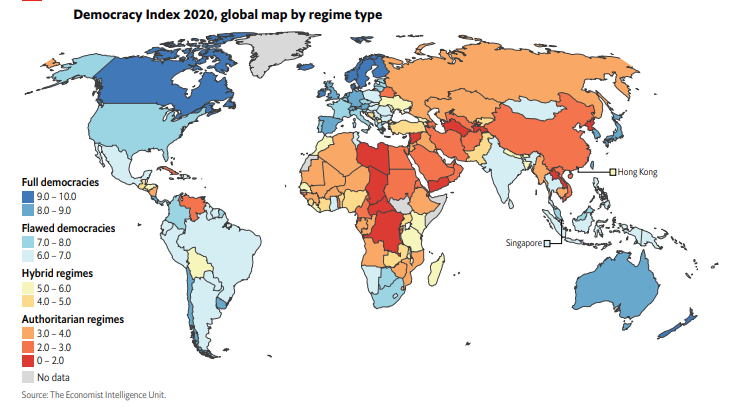 Declining of the global score in the year 2020 was lead by a fall in the average regional score all over the world. Although, it declines especially falls in the authoritarian regime in the dominated regions of Sub-Saharan Africa and the Middle East, and North Africa. The scores of the countries in these regions decline by 0.10 and 0.09 respectively in the years 2019 and 2020.

In Europe, especially western and eastern regions recorded a fall in their average regional scores of 0.06. Countries in Asia and Australasia (Australia, New Zealand, and some neighbouring islands) have also marked the fall by 0.05.

The average score of Latin America’s is declined by 0.04 in 2020 which marked the fifth consecutive year of regression for the region.

North America’s average score fell by only 0.01, but a bigger decline of 0.04 in the US score was marked by an improvement in Canada’s score.

Only 38 (22.6%) recorded an improvement and the other 13 stagnated, with their scores remaining unchanged compared with 2019.

There were some impressive improvements and some dramatic declines, as discussed in the “Highlights” section, with Taiwan registering the biggest improvement and Mali the biggest decline.

There were 11 changes of regime category, seven negative and four positive. Three countries (Japan, South Korea, and Taiwan) moved from the “flawed democracy” category to be classified as “full democracies” and one country, Albania, was upgraded to a “flawed democracy” from a “hybrid regime” previously.

France and Portugal experienced a reversal, losing the “full democracy” status they had regained in 2019, re-joining the ranks of “flawed democracies”. El Salvador and Hong Kong were downgraded from the “flawed democracy” classification to that of “hybrid regime”.

Further, ranking came down, Algeria, Burkina Faso, and Mali lost their status as “hybrid regimes” and are now designated as “authoritarian regimes”.

At last, let us have a look at India’s neighbouring countries ranking

Among India’s neighbours, the rank of Sri Lanka is 68 and is classified as a “flawed democracy”, Bangladesh (76), Bhutan (84), and Pakistan (105) and are classified in the ''hybrid regime'' category. Afghanistan is ranked 139th and classified as an ''authoritarian regime'' in the democracy index.

What is Smart Wall for Borders?