Fun with Numbers: Where do the + Plus and - Minus Signs come from?

Fun with Numbers: Do you know when and where do the Plus (+) and Minus (-) signs originated? Let’s look at the amazing facts and history of numbers and symbols.

Fun with Numbers: The symbols for the arithmetic operations are quite common when we solve any mathematical problem. For addition we normally use the plus sign ("+") and for subtraction we use the minus sign ("+") and subtraction ("–"). But have you ever thought that from where do these symbols came from. Well it is obvious that these symbols which are so common today must not have always exist. Someone must have invented these symbols. So lets go back to the history and know when and where do the Plus (+) and Minus (-) signs originated.

If we look into the history, the = and - symbols were used in the 15th century to show that boxes of merchandise were overweight or underweight. In case the box is overweight, they used the sign + . if the box is underweight the sign — . Research shows that within the span of 40 years after this, the accountants and mathematicians started using them in practice.

It has been claimed by many researchers that the + symbol came from the Latin word 'et' meaning ‘and’. As per the old books and records, the first person who might have used the + sign as an abbreviation for et was the astronomer Nicole d'Oresme (author of The Book of the Sky and the World) at the middle of the 14th century. A manuscript belonging to the year 1417 also has the + symbol indicating as a descendent of one of the forms of et.

The symbol ‘-” was first used and appeared in a German algebra manuscript from 1481 that was found in the Dresden Library. In one of the Latin manuscript belonging to the year 1481 from Dresden Library), both symbols + and – appear. These manuscripts were examined and annotated by Johannes Widman who later in 1489 at Leipzig published the first printed book (Mercantile Arithmetic) in which the two signs + and – occurred. 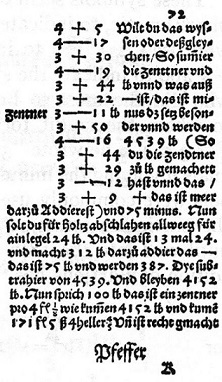 So it can be inferred that Widman used the symbols after they were derived from merchants' practices. In Italy, the plus and minus symbols were adopted by the astronomer Christopher Clavius, a German who lived in Rome), the mathematicians Gloriosi, and Cavalieri at the beginning of the 17th century.

In English, the first appearance of + and – in appeared in the 1551 book on algebra The Whetstone of Witte by the Oxford mathematician Robert Recorde. He also introduced the equal sign as the rather longer than today's symbol "═." While describing the plus and minus signs Recorde explained: "There be other 2 signes in often use of which the first is made thus + and betokeneth more: the other is thus made – and betokeneth lesse."

Can you find the Hidden Animal inside the herd of Zebras?

So, if we look into the past, the plus and minus symbols must have been originated 500 years back and have been evolved with the time in different parts of the world. , And, if we look at these symbols now, they have become part of what is perhaps the most universal language these days.