Dementia is not a specific disease. It is overall term that describes a group of symptoms associated with a decline in memory or other thinking skills severe enough to reduce a person's ability to perform everyday activities. This article deals with the Questions and Answers on dementia disease which help to understand about it and also helps in the preparation of several competitive exams like SSC, UPSC, and PSC etc. 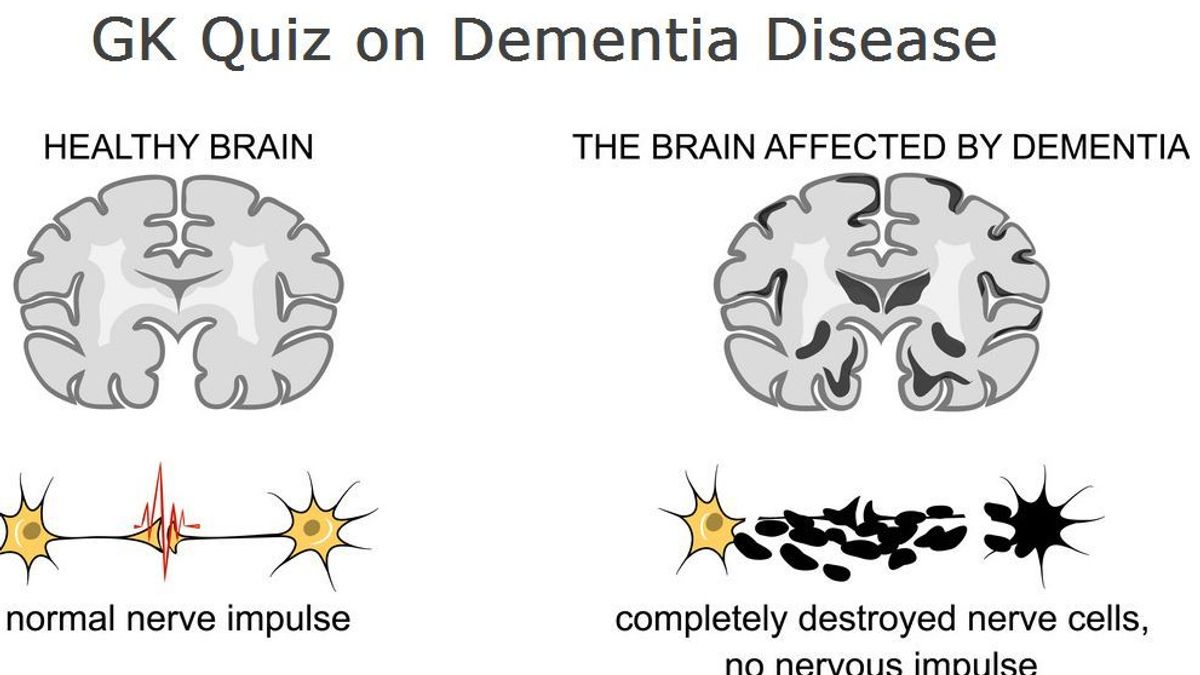 Dementia describes a set of symptoms that may include memory loss, difficulties with thinking etc. It interferes person's daily life and activities. It is caused when the brain is damaged by diseases like Alzheimer's disease or a series of stroke. We can say that it is the common cause of dementia but not the only one.
1. Which of the following sentence is/ are correct about Dementia?
A. In Dementia mental ability declines and interfere the daily life.
B.  A person suffering from this disease may forget his or her name.
C.  Alzheimer's disease is a cause of Dementia.
D.  All the above are correct

Explanation: Dementia disease affects about one in ten people over the age of 65 and almost one in four over 85 years. People under the age of 65 are also prone to the disease which is known as early onset of Alzheimer’s. In Dementia mental ability declines and it interferes the daily life and person suffering from this disease may forget his or her name.

D. All the above are correct

Explanation: Alzheimer disease is a degenerative disease of the brain that causes dementia, which is a gradual loss of memory, judgement, and ability to function. It is a form of dementia which has been found to be closely linked with type 2 diabetes and is characterised by confusion & memory loss. It typically progresses slowly in three general stages: mild (early-stage), moderate (middle-stage) and severe (late-stage).

3. Which of the following is not the Symptom of Dementia?
A. Problem solving or language and the ability to focus and pay attention.
B. Memory loss
C. Difficulties with thinking
D. Dementia people are able to control their emotions.
Ans. D

Explanation: Even dementia people are not able to control their emotions and their personalities may change.

Explanation: Dementia can be caused by a head injury, a stroke, a brain tumour or due to HIV infection.

5. Name the type of Dementia disease in which a neurodegenerative condition linked to abnormal structures in the brain?
A. Alzheimer's disease
B. Dementia with Lewy bodies
C. Parkinson's disease
D. Huntington's disease
Ans. B

Explanation: Dementia with Lewy bodies is a neurodegenerative condition linked to abnormal structures in the brain. The brain changes involve a protein called alpha-synuclein.

6. Which disease is characterized by specific types of uncontrolled movements but also includes dementia?
A. Parkinson's disease
B. Mixed dementia
C. Huntington's disease
D. None of the above
Ans. C

Explanation: Mixed dementia means a person may show both Alzheimer's disease and vascular dementia at the same time.

Explanation: Down syndrome increases the likelihood of young-onset Alzheimer's.

Explanation: Alzheimer’s and related Disorders Society of India (ARDSI) calls for the government to have its plan or policy on dementia which must be implemented in all States, funded and monitored by the Health Ministry.

10. Which of the following statements is/are correct about mnemonics?
A. Mnemonic systems are techniques or strategies consciously used to improve memory.
B. The study and development of systems for improving and assisting the memory.
C. A device of any learning technique that aids information retention or retrieval in the human memory and it is a symbol used to specify a computing function.
D. All the above are correct

Explanation: A mnemonic is a device or a memory device which helps in any learning technique that aids information retention or retrieval (remembering) in the human memory. The word "mnemonic" is derived from the Ancient Greek word mnēmonikos meaning "of memory” or “relating to memory" and is also related to Mnemosyne that is remembrance.

Therefore, Dementia disease mostly affects older people but is not a normal part of aging. Many people suffer from memory loss but that does not mean that they have Alzheimer's or another dementia. There may be various reasons of having memory problems.