GK Questions and Answers on the classification of matter

Everything in the universe, which is not energy, is called a matter. There are three physical states of matter - solid, liquid and gas. It has been basically classified in two types - mixture and pure substance. Let us study in the form of questions and answers about the matter, its states, how they are classified, etc. through this article. 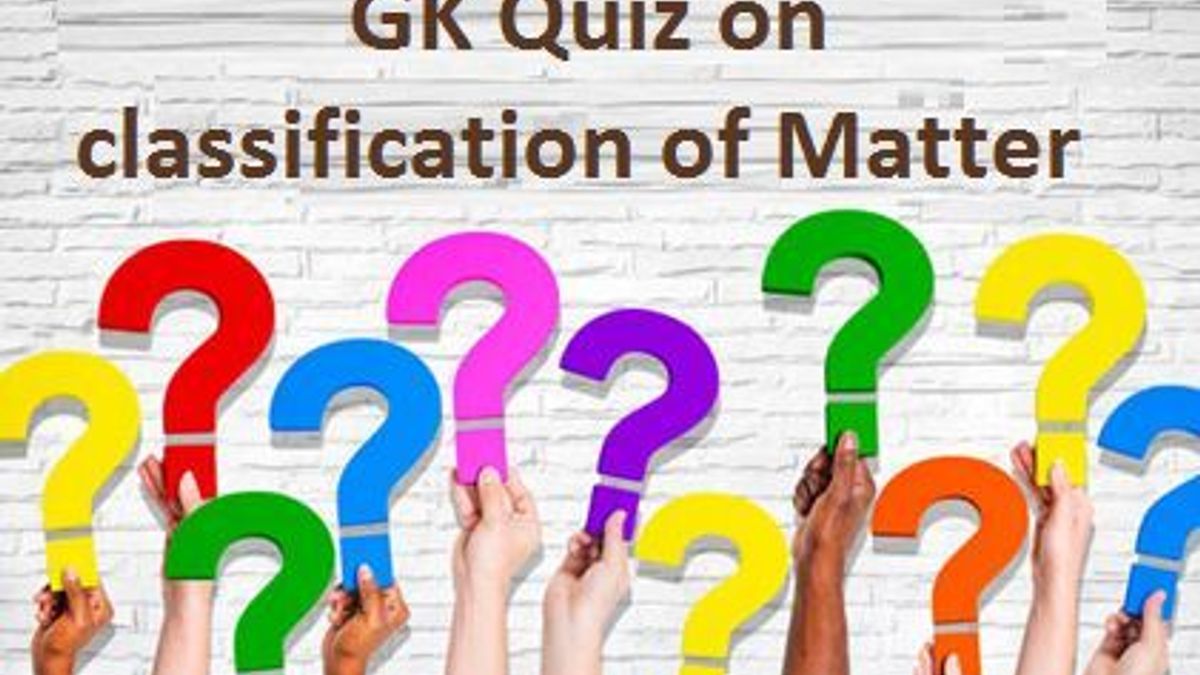 GK Quiz on classification of Matter

Everything that has mass and which occupies space is called 'matter'. The universe is constructed with matter and energy. Matter is made of very small particles and is constantly dynamic. It is classified into mixture and pure substance. Mixture is further classified as homogeneous and heterogeneous and Pure substances as element and compound.

1. Which technique is used to separate the substances from a mixture?
A. Chromatography
B. Racing Forging
C. Assembling
D. None of the above
Ans. A

Explanation: Chromatography is one of the most important technique for the separation of a mixture by passing it in solution or suspension through a medium in which the components move at different rates. Mixtures that are suitable for separation by chromatography include inks, dyes and colouring agents in food.

2.  In what way iodine can be separated from a mixture of potassium chloride and iodine?
A. Filtration
B. Sedimentation
C. Distillation
D. Sublimation
Ans. D

Explanation: Sublimation is a chemical process where solid is converted into a gas without going through a liquid stage. At standard, atmospheric pressure, a few solids which will sublime are iodine, carbon dioxide, naphthalene and arsenic.

Explanation: Some elements show the properties between metals and non-metals and are known as metalloids such as boron, silicon etc.

4. Which of the following statements are correct about metals?
(a) Metals are lustrous.
(b) These are good conductors of heat and electricity.
(c) They can be converted into wire.
(d) They are malleable.

Explanation: A mixture in which its components do not mix with each other and the distribution of components in different parts of the mixture is not uniform is called heterogeneous mixture.

6. By which process can sea water be purified?
A. Evaporation
B. Fractional Distillation
C. Filtration
D. Distillation
Ans. D

Explanation: Distillation is a procedure by which two liquids with different boiling points can be separated or it is a process in which the components of a substance or liquid mixture are separated by heating it to a certain temperature and condensing the resulting vapours.

7. Which technology is used to squeeze water from the soaked clothes in the washing machine?
A. Evaporation
B. Decantation
C. Centrifugation
D. Sedimentation
Ans. C

Explanation: When the particles present in the fluid are so small that they crosses the pores of the filter sheet, so these particles are not separated by filter method. When these mixtures are rotated quickly, heavy particles sit down and the light particles remain above. This is centrifugation technique or we can say that Centrifugation is a technique used for the separation of particles from a solution according to their size, shape, density, viscosity of the medium and rotor speed.

8. Due to which process dry raisins when kept in water swell up?
A. Osmosis
B. Sedimentation
C. Distillation
D. Decantation
Ans. A

Explanation: A process by which molecules of a solvent tend to pass through a semi-permeable membrane from a less concentrated solution into a more concentrated one is known as osmosis.

9. Which of the following is a mixture?
A. Distilled water
B. Gasoline
C. Both A and B
D. Neither A nor B
Ans. B

Explanation: Two or more elements or compounds when mixed in any proportion so that the chemical properties of the components do not change, then it is called a mixture.

10. Boyle's law relates to which state of matter?

A. Solid state
B. Liquid stage
C. Gaseous state
D. None of the above
Ans. C

Explanation: Boyle's law, the pressure of certain quantities of gas on stable heat is inversely proportional to its volume.

From this article we have learnt what is matter, states of matter, properties of matter, classification of matter and its applications etc. in the form of questions and answers.