Indian Council Act of 1909 is also known as Morley- Minto Reform. It was instituted to placate the Moderates (Congress) and introduces separate electorates on the basis of religion. Therefore, Lord Minto came to be known as Father of Communal Electorate in India. 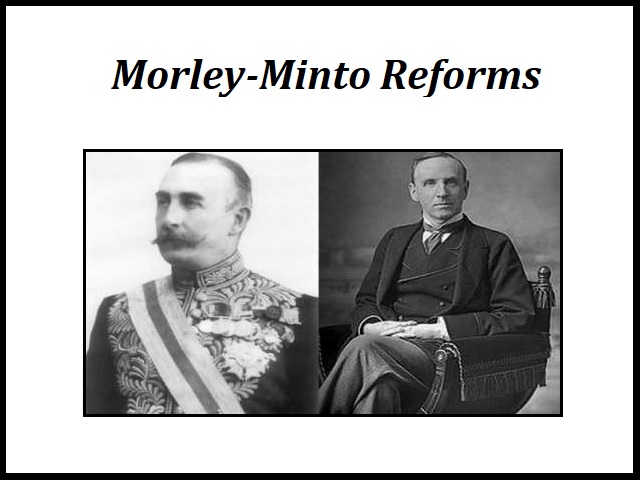 Morley-Minto Reform was another name of the Indian Council Act of 1909, which was named after the secretary of state and the Viceroy. It was instituted to placate the moderates. According to this act, the membership of the central and provincial legislative councils was enlarged. However, the number of elected members in these councils was less than half of their total membership. It may also be remembered that the elected members were not elected by the people but by landlords, organizations or traders and industrialists, universities, and local bodies. The British also introduced communal electorates as a part of these reforms. This was meant to create disunity between Hindus and Muslims. Some seats in the councils were reserved for Muslims to be elected by Muslim voters.

By this, the British hoped to cut off Muslims from the nationalist movement by treating them apart from the rest of the nation. They told the Muslims that their interests were separate from those of other Indians. To weaken the nationalist movement, the British began to consistently follow a policy of promoting communalism in India. The growth of communalism had serious consequences for the unity of the Indian people and the struggle for freedom. The congress at its 1909 session welcomed the reforms but strongly opposed the reforms the creation of separate electorates on the basis of religion.

The Morley-Minto reforms did not introduce any significant change in the powers of the councils. They did not mark and advance towards the establishment of a representative government, much less swaraj. In fact, the Secretary of state frankly declared that he had absolutely no intention of introducing a Parliamentary form of Government. The autocratic form of government that had been introduced after the revolt of 1857 remained unchanged even after the Morley-Minto reforms.

The only change was that the government started appointing some Indians of its choice to certain high positions. Satyendra Prasad Sinha, who later became Lord Sinha, was the first Indian to be made a member of the Governor-General’s executive council. Later he was made a governor of a province, the only Indian to occupy such a high office during the entire period of British rule. In 1911, he was presented in an imperial Darbar that was held at Delhi at where British king, George V, and his queen were also present. The Darbar was also attended by Indian princes who displayed their loyalty to the British crown. Two important announcements were made on the occasion. One was the annulment of the partition of Bengal which had been affected in 1905. The other was the shifting of the capital of British India from Calcutta to Delhi.

List of British Governors Generals during British Period in India

Features of the Act

3. It enlarged the deliberative functions of the legislative councils at both levels. For example, members were allowed to ask supplementary questions, move resolutions on the budget, and so on.

4. It provided (for the first time) for the association of Indians with the executive councils of the Viceroy and Governors. Satyendra Prasad Sinha became the first Indian to join the Viceroy’s Executive Council. He was appointed as the law member.

5. It introduced a system of communal representation for Muslims by accepting the concept of a separate electorate’. Under this, the Muslim members were to be elected only by Muslim voters. Thus, the Act ‘legalised communalism’ and Lord Minto came to be known as the Father of Communal Electorate.

6. It also provided for the separate representation of presidency corporations, chambers of commerce, universities, and zamindars.

Indian Council Act of 1909, AD was instituted to placate the moderates and appeasement to the disseminate Muslims from National Movement by granting them separate electorate.