What is the Inter-Parliamentary Alliance on China?

The Inter-Parliamentary Alliance on China (IPAC): On June 5, to counter authoritarian China, lawmakers from 8 democracies of the world, including the United States have joined hands to form a new alliance known as the IPAC. 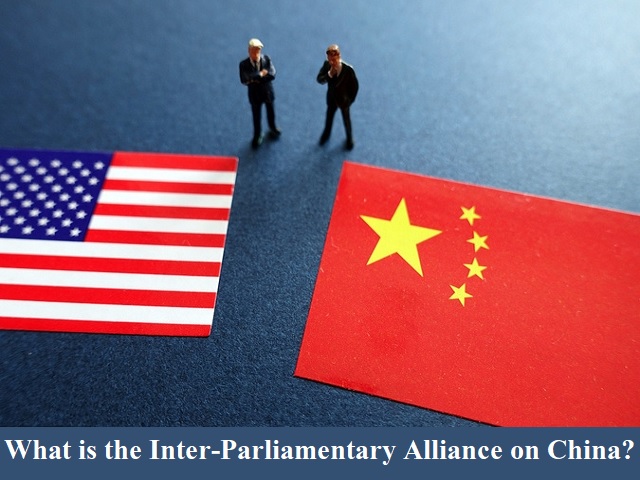 On June 5, to counter authoritarian China, lawmakers from 8 democracies of the world, including the United States have joined hands to form a new alliance. This new alliance is known as the Inter-Parliamentary Alliance on China (IPAC) and was launched on June 5. Senior United States senator from Florida Marco Rubio announced the formation of the IPAC and stated that China under the rule of the Chinese Communist Party represents a global challenge.

The Inter-Parliamentary Alliance on China (IPAC) is an open, free and rules-based international order that supports human dignity. It is created so that like-minded countries can join in to participate actively in its governance and enforcement. It also aims to construct appropriate and coordinated responses, and to help craft a proactive and strategic approach to issues related to China.

The missions of the Inter-Parliamentary Alliance on China (IPAC) falls into 5 different categories. These are as follows:

The IPAC has 8 participating nations-- US, Germany, UK, Japan, Australia, Canada, Sweden, Norway. The IPAC will be co-chaired by a group of senior politicians drawn from a representative cross-section of the world’s major political parties. The alliance comprises of 18 politicians including the US Senators Marco Rubio and Robert Menendez and the members of the European Parliament.

The resentment against Communist China is due to its carelessness in handling the deadly COVID-19 virus and hiding the information with the world. China is bullying all the countries, both politically and economically, which are going against China over Coronavirus pandemic.

Australia has witnessed fraught relations with China as it has called for an independent probe regarding the Coronavirus pandemic. On the other hand, Sweden's relations with China are not good since 2015 as China kidnapped the Swedish author in Thailand. It was later revealed that the author was detained in China.

The United States of America has ample reasons to join hands with other democracies against China. First, the US has accused China over unfair trade practices. Second, the US has condemned the Hong Kong National Security Law passed in China's parliament. Third, the deprivation of Human Rights of Uighur Muslims and people in Tibet and lastly, the protection of democratic rights in Taiwan.

China's response to the IPAC

Chinese mouthpiece Global Times lashed out the newly formed IPAC stating that Anti-China alliance in the globalized era of the 21st century is doomed to fail. The lawmakers need to realize that China is definitely not the country it was in the 1900s.

Recently, when Australia backed the US for an independent international investigation over the origin and spread of the COVID-19, Beijing slapped new tariffs on Australia and banned the import of beef in the country.

History of racism in the US: Here's all you need to know