A demon is a malevolent supernatural entity. Let’s understand them better according to Hindu mythology.

A hero to be a hero needs a Demon. A demon is a malevolent supernatural entity. Historically, belief in demons, or stories about demons, occurs in religion, occultism, literature, fiction, mythology, and folklore, as well as in media such as comics, video games, movies, anime, and television series.

According to Brihadaranyaka Upanishad says, Gods and demons were the twofold offspring of the Prajapati, creator of all beings. However, the gods were the younger and the demons were the older. Do you know how many demons are there in the study of Hindu Gods?

Andhaka is the name of a wicked asura who was slain by Shiva and Parvati in Hindu literature. Numerous Hindu texts, such as the Matsya Pura, the Karma Pura, the Liga Pura, the Padma Purana, and the Shiva Purana, make reference to his tale. He is said to have two thousand eyes in addition to having 1,000 arms and 1000 heads. In a different version, he has 2,000 arms and 2,000 legs. Andhaka is referred to as the son of Shiva and Parvati in some of his stories. 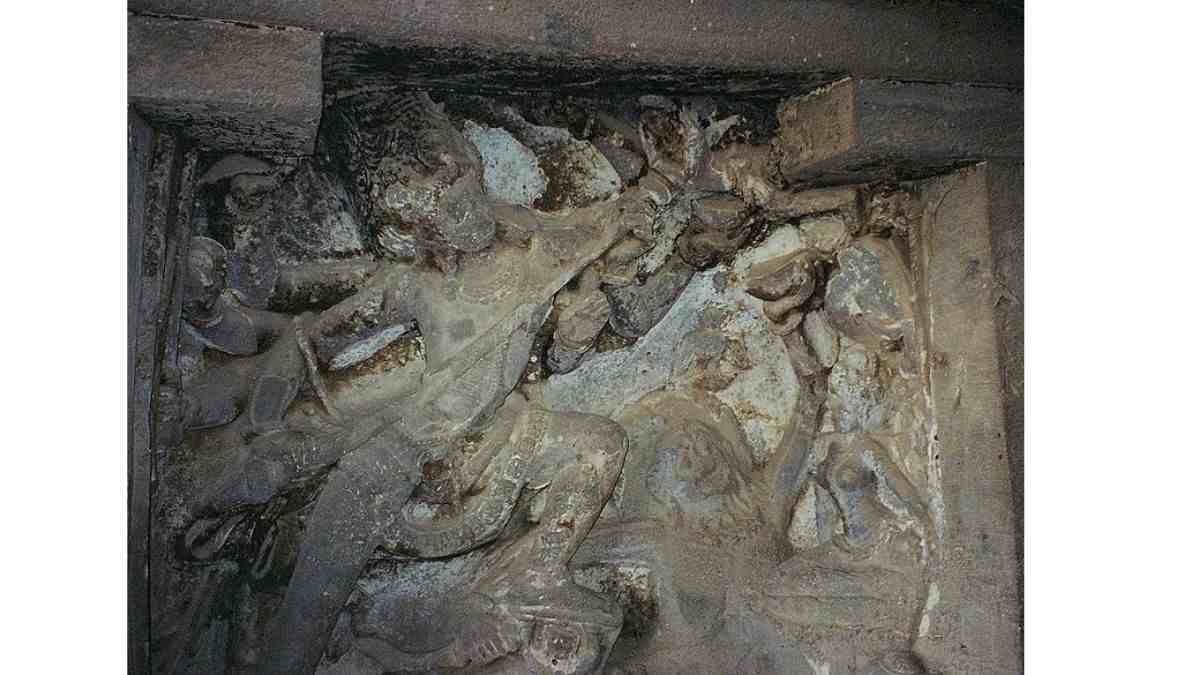 Aruna was a strong asura who lived in the city of the daityas. He traveled to the Ganges River's banks in the Himalayas and performed a stringent penance to Brahma, whom he believed to be the daityas' guardian.

As Brahma watched the daitya's penance and resolve, he came down to greet him. Arunasura was given the boon of not dying in battle, by arms or weapons, by men or women, by bipedal or quadrupedal creatures, or by any combination of the two, despite his refusal to grant him immortality. This blessing gave Arunasura the courage to summon all the other daityas living in the nether regions and fight the deities in a final battle. The conceited Aruna invaded Devaloka and advanced to capture Kailasa, where he was killed by Brahmari.

Indic religions include a group of beings known as asuras. The more benevolent Devas (also known as Suras in Hinduism) are said to be related to these clans, which are described as power-seeking. The word is occasionally translated as "titan," "demigod," or "antigod" in its Buddhist context.

Hindu scriptures claim that the asuras and the devas are constantly at war. The good Asuras are known as Adityas and are led by Varuna in early Vedic literature, while the evil Asuras are known as Danavas and are led by Vritra. Agni, Indra, and other gods are also referred to as Asuras in the earliest Vedic texts in the sense of being "lords" of their respective fields of expertise, knowledge, and skills.

Bakasura, also known as Baka or Kuaishwa in the Hindu epic Mahabharata, is a rakshasa. The rakshasa lived in the forest near Ekachakrapura. In exchange for defending the kingdom from invaders, he terrorizes its citizens and devours them at will. The helpless king is rendered powerless. The people reach an agreement with their tormentor: they will send him large quantities of food every week, which he will consume along with the cart driver who delivers them. Bhima is eventually sent out to kill Bakasura under the direction of his mother, Kunti, in order to save the life of their Brahmin host when it is his turn to deliver the cartload. 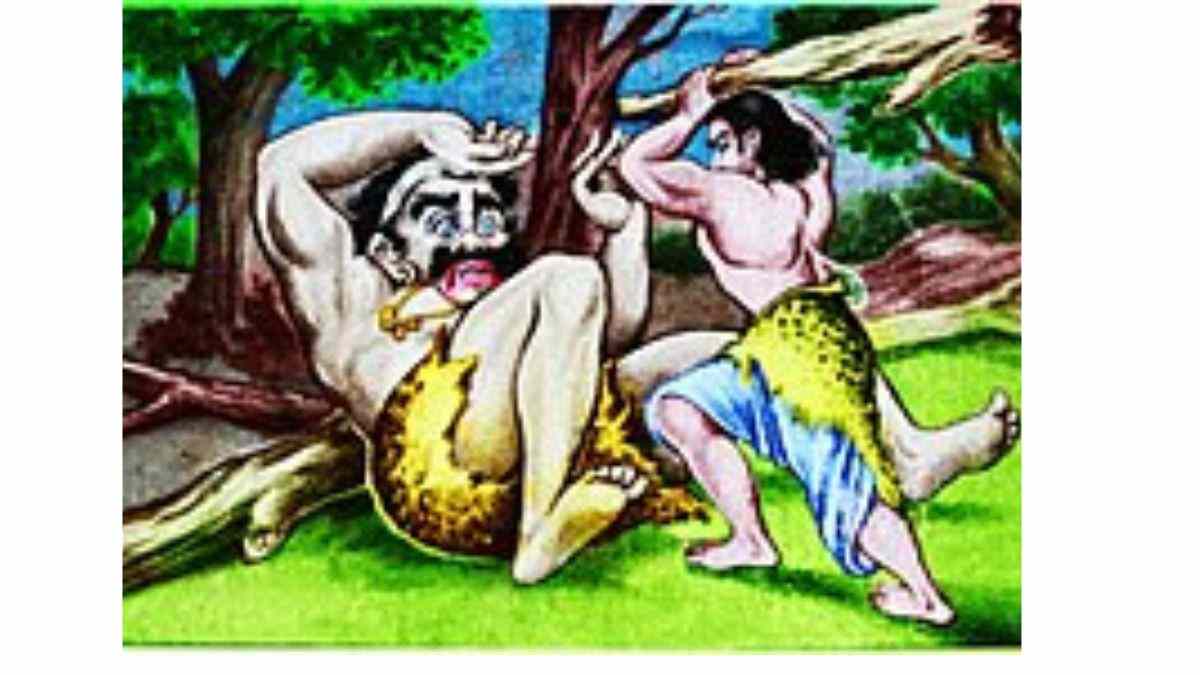 Mahabali, also known as Bali, Indrasenan, or Mveli, is a Hindu daitya king. He is Prahlada's grandson and a descendant of the sage Kashyapa. Many versions of his legend can be found in ancient texts such as the Shatapatha Brahmana, Ramayana, Mahabharata, and various Puranas. According to Hindu mythology, he was banished beneath the earth into the patala (netherworld) by Vishnu's avatar, Vamana. 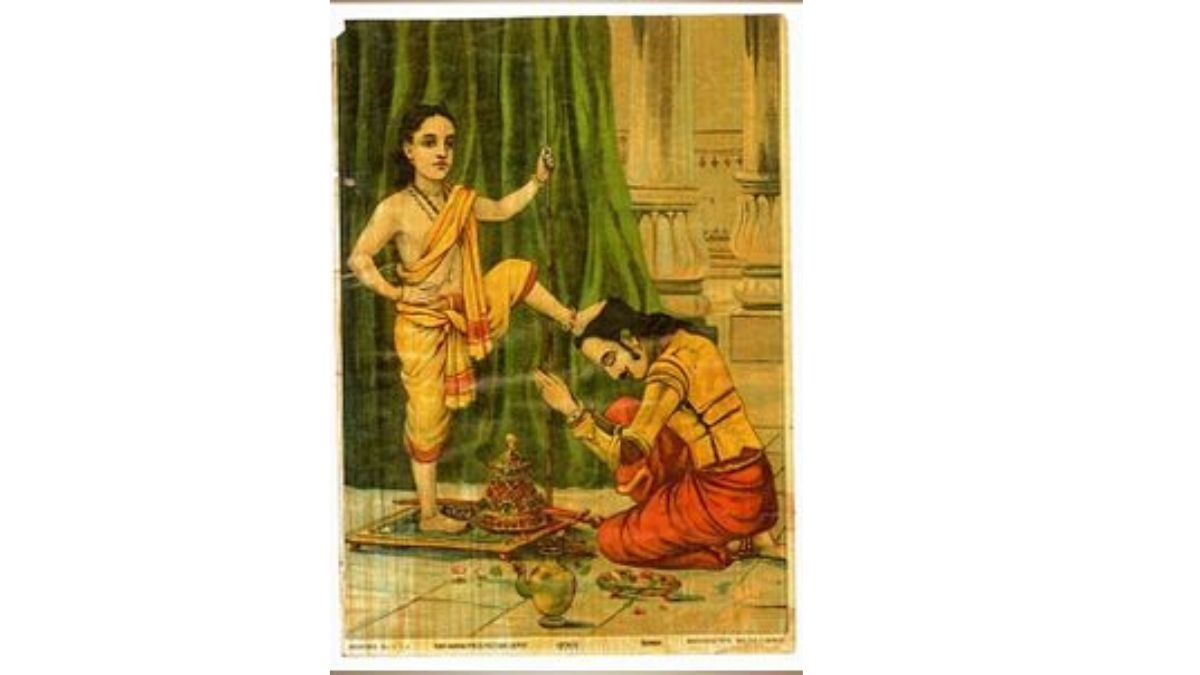 Mahabali, also known as Chiranjivi, is one of the eight immortals and is expected to become King of Svarga (heaven) in the next yuga.

In the Indian subcontinent popular culture, literature, and some ancient texts, a bhoota or bhuta is a supernatural creature, usually the ghost of a deceased person. The origins of bhootas vary by region and community, but they are usually thought to be perturbed and restless due to some factor that prevents them from progressing to transmigration, non-being, nirvana, swarga, or Naraka, depending on tradition. This could be due to a violent death, unresolved issues in their lives, or simply their survivors' failure to perform proper funerals.

The Bhutas, spirits of deified heroes, fierce and evil beings, Hindu deities and animals, and so on, are incorrectly referred to as "ghosts" or "demons" when they are actually protective and benevolent beings. Though they can cause harm in their violent forms, because they are extremely powerful, they can also be appeased through worship or offerings known as Bhuta Aradhana.

Kabandha is a Rakshasa (demon) in Hinduism who is killed and released from a curse by the god Rama, an Avatar of Vishnu, and his brother Lakshmana. The legend of Kabandha can be found in the Hindu epics Ramayana and Mahabharata, as well as later Ramayana adaptations. 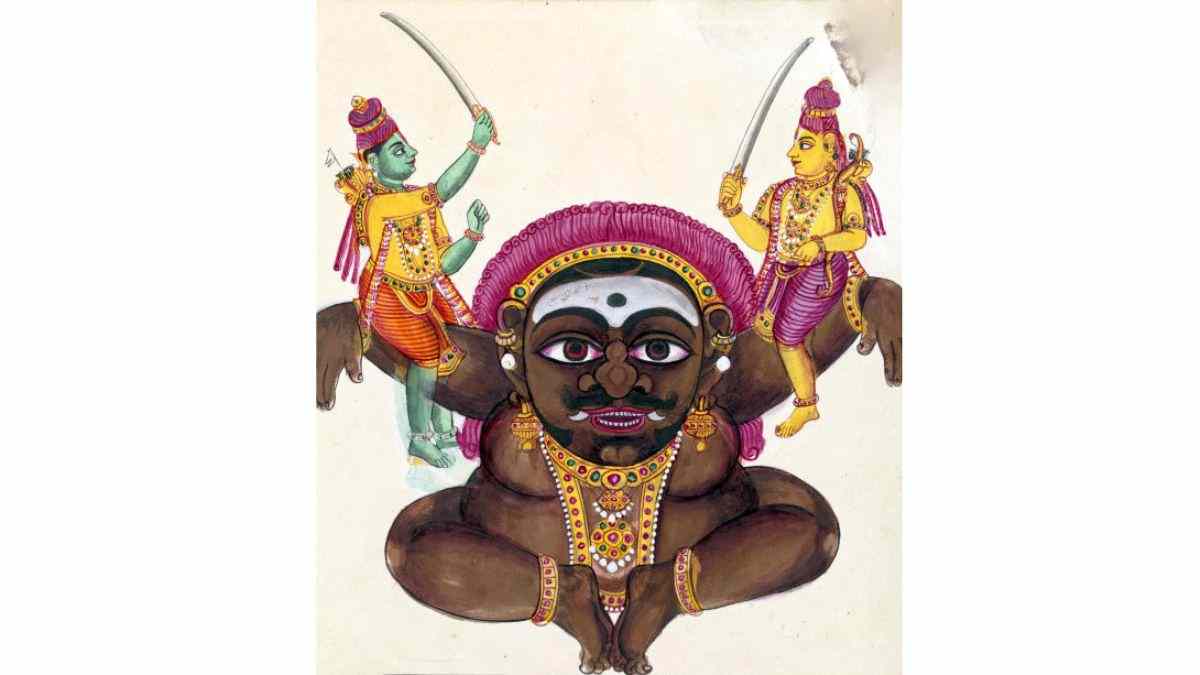 A 19th-century painting from Tiruchchirappalli.

Kabandha was a Gandharva named Vishvavasu or Danu who was cursed and turned into an ugly, carnivorous demon by Indra, the king of heaven, and/or Ashtavakra, a sage.

He was the one who advised Rama to form an alliance with Sugriva in order to find Rama's wife Sita, who had been kidnapped by Ravana, the demon king of Lanka. Following Kabandha's advice, Rama befriends Sugriva and enlists his assistance in rescuing Sita.

Kumbhakarna is a powerful rakshasa and Ravana's younger brother in the Hindu epic Ramayana. Despite his enormous size and appetite, he is described in Hindu texts as a virtuous character and a great warrior. During Rama's invasion of Lanka, he is said to have slaughtered 8,000 vanaras.

In one version of the story, Kumbhakarna, accompanied by his brothers Ravana and Vibhishana, performed a major yajna to appease Brahma. Indra was concerned and jealous of Kumbhakarna's strength, so he went to Brahma before Kumbhakarna's boon could be fulfilled.

When Kumbhakarna asked for his boon, the goddess Saraswati, who acted on Indra's request, tied his tongue. Instead of Indraasana (Indra's throne), he requested Nidraasana (bed for sleeping). His request was granted immediately. However, as a boon, his brother Ravana requested that Brahma remove the curse, and Brahma reduced it to sleeping for six months, after which he would sleep again as soon as his appetite was satisfied.

According to the Kalki Purana, he is a huge being the color of soot, with a large tongue and a terrible stench. He was born with a Upasthi (worship) bone. The Kalki Purana says that this asura (demon) chose gambling, liquor, prostitution, slaughter, and gold as his permanent abodes.". According to the Sanskrit-English Dictionary, Kali is "of a class of mythic beings (related to the Gandharvas, and rumored to be fond of gambling)".

Maricha, or Mareecha, is a demon in the Hindu epic Ramayana who was killed by Rama, the epic's hero and an avatar of Lord Vishnu. He is mentioned as an ally of Ravana, the epic's antagonist. His most notable exploit is his involvement in the kidnapping of Rama's wife, Sita. Hanuman killed his son Kalanemi. 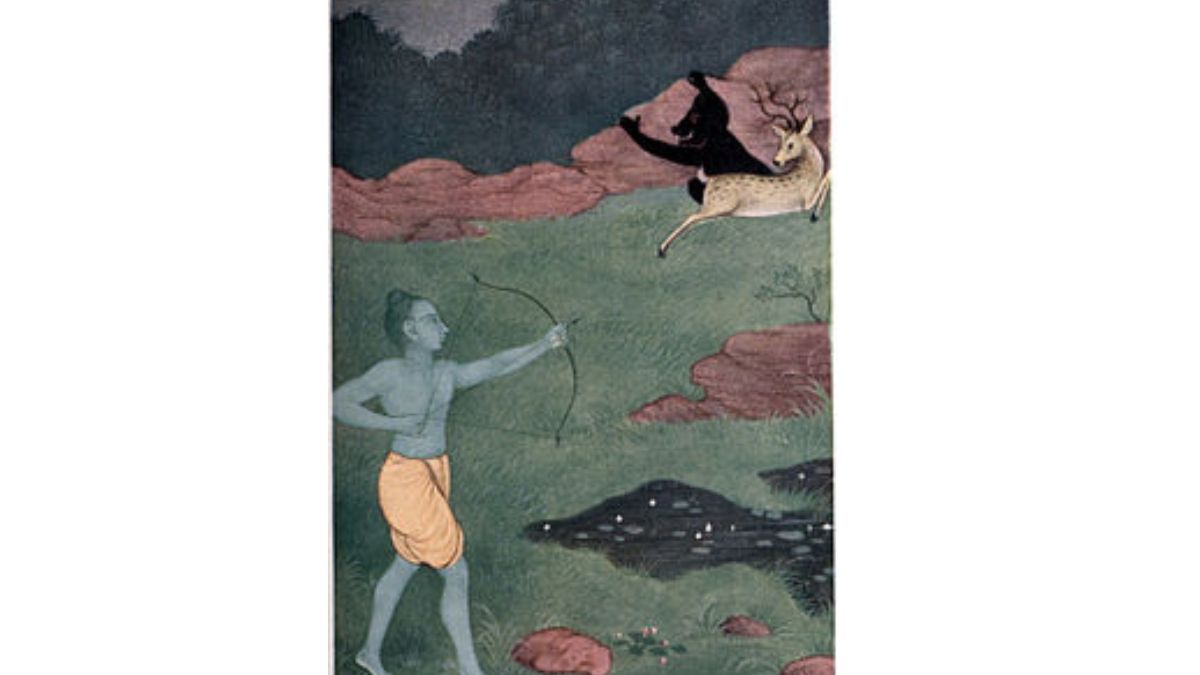 Maricha, like his mother Tataka and brother Subahu, was cursed to be a rakshasa and spent his early life terrorizing sages. Rama defeated him at the request of the sage Vishvamitra. He tried to kill Rama again but had to flee for his life. Maricha eventually took on the form of a golden deer and assisted Ravana in kidnapping Sita.

Puloman, the Asura-king, rules from the subterranean realm of Patala, which contains the primary form of all wealth. This is why Lakshmi is also known as Paulomi and Patala-nivasini, or Patala resident. 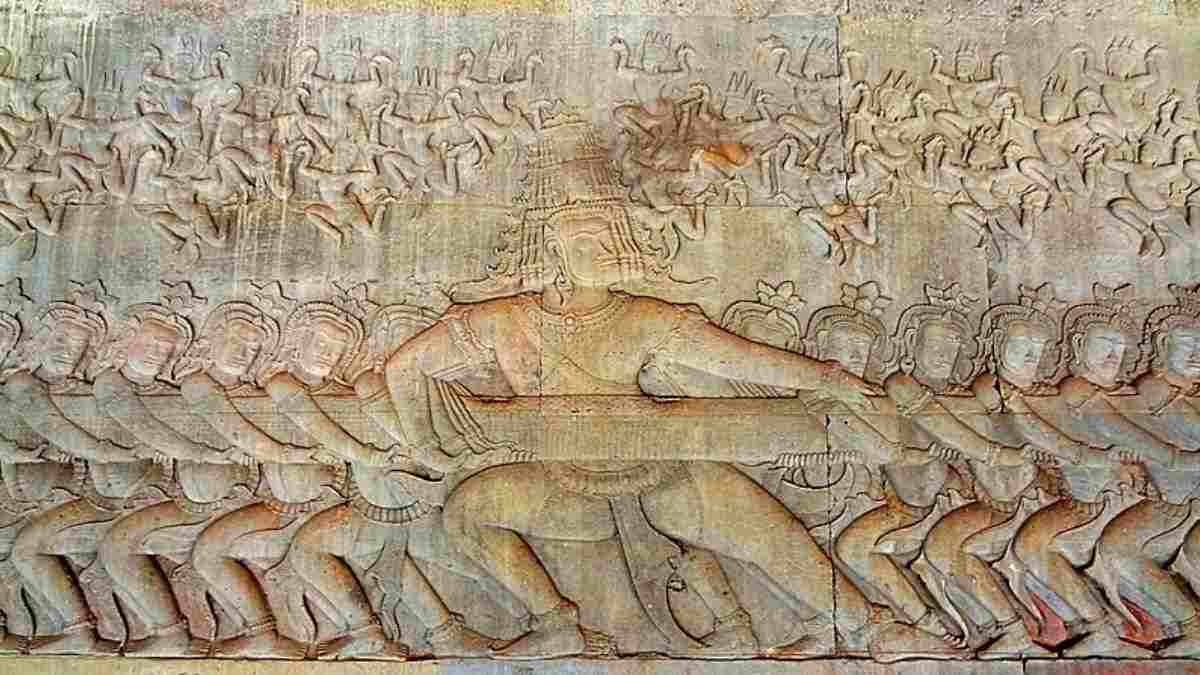 In Hinduism, the Danava Puloman is the father of Shachi, Indra's wife. Indra killed Puloman and took his daughter as his consort.

Rakshasas, literally "preservers," are a race of usually malevolent demigods prominent in Hindu mythology. The rakshasas were created by Brahma when he assumed a body of tamas (darkness), the beings springing forth and promising to protect the waters of creation, according to the Brahmanda Purana. In the Vedic scriptures, they are frequently depicted as man-eaters, acting as embodiments of the forces of evil. They are distinguished from their cousins, the yakshas, who are portrayed as destructive forces. The term is also used to refer to asuras, a type of power-hungry being who opposes the benevolent devas. In Hindu scriptures, as well as Buddhism and Jainism, they are frequently depicted as antagonists. Rakshasi is the female form of rakshasa.

Putana is a rakshasi who was killed by the infant god Krishna in Hinduism. Putana disguises herself as a young, beautiful woman and attempts to kill Krishna by breast-feeding poisoned milk; however, Krishna sucks her milk as well as her life through her breasts. Putana is also regarded as Krishna's foster mother because she breastfed him. In the shadow of her evil motives, Putana had performed "the supreme act of maternal devotion" by offering her milk to Lord Krishna. 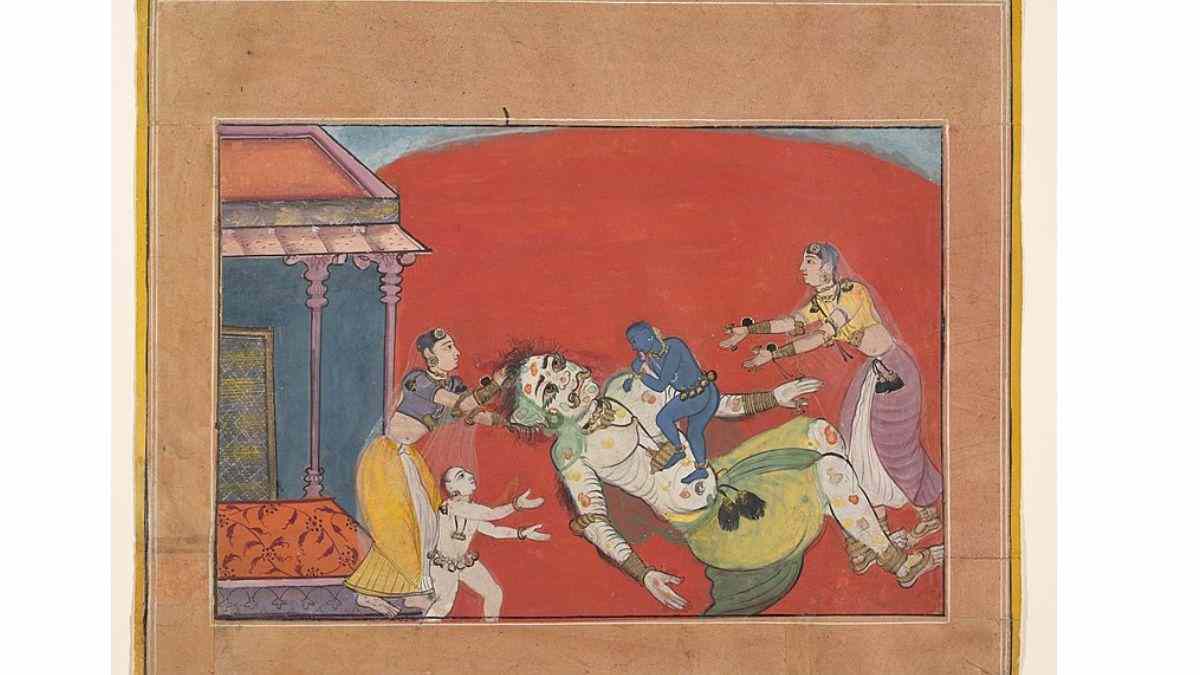 Many modern religions and works of literature continue to include demon worship. Demons are still feared, owing to their alleged ability to possess living creatures. However, not all rakshasas are equally evil in Hindu mythology; some are more akin to yakshas, or yakas (nature spirits), while others are more akin to asuras, the traditional opponents of the gods.

A look at the brief history of Hindus.