Society and Economy under Vijaynagara Empire

The empire was ruled by four dynasties. I.e. Sangama dynasty, Saluva Dynasty, Tuluva dynasty, and Aravidu dynasty. The rulers of Vijayanagar Empire devoted themselves to the growth of agriculture and built cities and capitals with magnificent buildings. The different aspects of Society and Economy under Vijaynagara Empire are contained in narratives of foreign travellers, inscriptions, and literature. 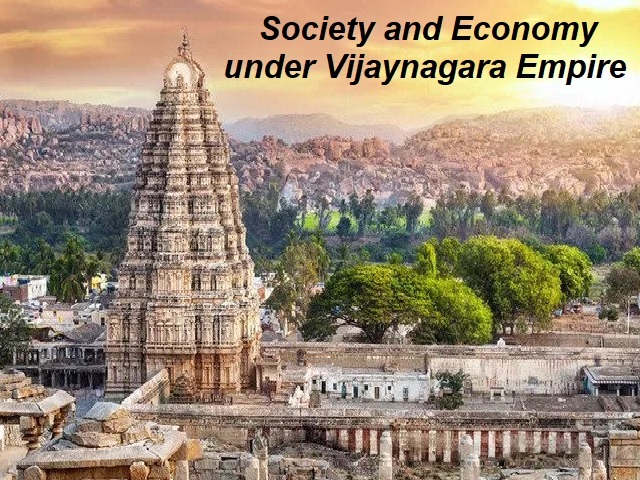 Society and Economy under Vijaynagara Empire

The rise of Vijayanagar Empire was accompanied by the decline of Delhi Sultanate. The empire was ruled by four dynasties. I.e. Sangama dynasty, Saluva dynasty, Tuluva dynasty, and Aravidu dynasty. The rulers of Vijayanagar Empire devoted themselves to the growth of agriculture, and built cities and capitals with magnificent buildings. The different aspects of Society and Economy under Vijaynagara Empire are contained in narratives of foreign travellers, inscriptions, and literature.

Society and Economy under the Vijaynagara Empire

1. Allasani Peddana, in his Manucharitam, mentions the four castes that existed in the Vijayanagar society.

I. Viprulu or Brahmins followed the traditional profession of teachers and priests. They sometimes also performed the duties of soldiers and administrators. This is confirmed from the narration of Domingo Paes.

II. Rajulu or Rachavaru was generally associated with the ruling dynasty. The rulers as well as generals were actually Shudras, but called rachavaru on account of their position. As in the case of other parts of South India, the Kshatriya Varna seems to be absent here.

III. Matikaratalu or Vaishyas were the same as merchants who carried on trade and commerce.

IV. Nalavajativaru or Sudras were mainly agriculturists, but some of them carried on several other professions. They were not segregated, although considered inferior.

2. The practice of dancing girls attached to temples was also in vogue. From the account of Paes, we learn that Devadasis held a highly respectable position in society, and were given land grants, maid-servants, etc.

3. The plight of widows was pitiable, but they could remarry.

4. The state encouraged widow remarriage by not levying any tax on It.

5. The prevalence of Sati or Sahagamana in the Vijayanagar Empire is proved both from inscriptions and foreign accounts of the period.

6. Chess: It was a game promoted by the state and players were rewarded.

8. Slavery: It was quite common and Nicolo de Conti says that those who failed to repay debts became the property of the creditor.

Early Vijayanagar rulers were followers of Saivism. Virupaksha was their family God. Later they came under the influence of Vaishnavism. But Siva continued to be worshipped.

1. Vaishnavism was professed in various forms. Srivaishnavism of Ramanuja was highly popular.

2. The Dvaita system of Madhava was also practiced.

3. Epics and Puranas were popular among the masses, especially since they served as a means of education among women.

The Vijayanagar Empire was one of the richest state then known to the world. Several foreign travellers, who visited the empire during the 15th and 16th Centuries, have left glowing accounts of its splendor and wealth.

1.  Agriculture:  It was in a flourishing condition. It was the policy of rulers to encourage agriculture in the different parts of the empire and to increase agricultural production by a wise irrigation policy. Nuniz, the Portuguese traveller, speaks of the construction of a dam and the excavation of canals.

2. Industries: The agricultural wealth was supplemented. by numerous industries, the most important of which were textiles, mining and metallurgy. Another important industry was perfumery.

3.. Industries and crafts were regulated by guilds.

4. It was common practice for people of the same trade to live in one and the same quarter of the city.

5. Abdur Razzak, the Persian diplomat and traveler, remarks: 'The tradesmen of each separate guild or craft have their shops close to another'. Trade There was flourishing inland, coastal, and overseas trade which was an important source of general prosperity. The kingdom, according to Abdur Razzak, had 300 seaports.

6. The most important commercial area on the West coast was Malabar, with its important port of Cannanore. It had commercial relations with the islands of the Indian Ocean, Burma, the Malay Archipelago, and China in the East, and Arabia, Persia, South Africa, Abyssinia and Portugal on the West.

8. Ships were used for coastal and overseas trade. Vijayanagar had its own ships; the art of ship-building was known, but we do not know if ocean-going ships were built.

9. Barbosa, another Portuguese traveller, says that South India got its ships built in the Maldive Islands.

The Vijayanagar emperors issued a large number of gold coins, called Varahas or Pagodas (Varahas because the most common symbol was Varaha-the Boar incarnation of Vishnu).

1. Harihara I and Bukka I used the Hanuman symbol in their coins.

2. Krishna Deva Raya's coins had the figures of Venkatesh and Balkrishna.

1. The accounts of foreign travellers speak of the high standards of living of the upper and middle classes.

2. The splendour of the capital city bears testimony to the wealth which was, however, the monopoly of only a section of the population.

3. But the prices of articles were low and the minimum necessities were probably not beyond the means of the common people.

4. However, producers, mainly agricultural producers, apparently got inadequate prices for their produce.

5. Another main defect of the economic system was that the common people had to bear the burnt of taxation, which was quite heavy and the local authorities sometimes adopted oppressive methods of collection.