India has a unique culture and is one of the oldest and greatest civilizations in the world. In this article, we have provided a summary of the Physiography of India as a quick revision capsule which can be helpful in the preparation of various competitive examinations. 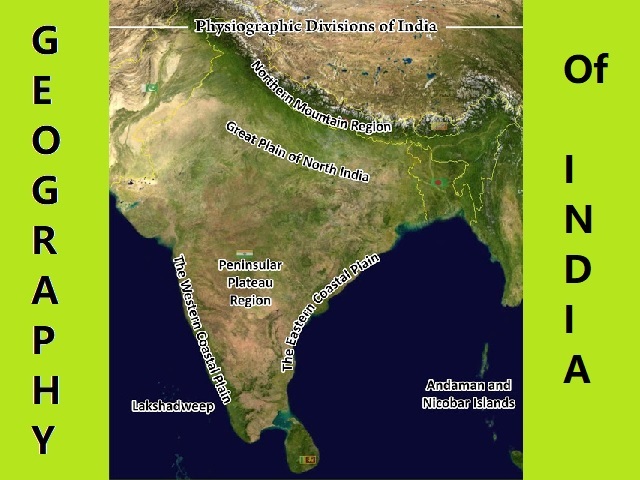 India has a unique culture and is one of the oldest and greatest civilizations in the world. It stretches from the snow-capped Himalayas in the north to Sun-drenched coastal villages of the south and the humid tropical forests on the south-west coast, from the fertile Brahmaputra valley in its east to the Thar Desert in the west. India shares its border from Afghanistan and Pakistan to the north-west, China, Bhutan, and Nepal to the north, Myanmar to the far East, and Bangladesh to the east. Sri Lanka is separated from India by a narrow channel of sea formed by the Palk Strait and the Gulf of Mannar. The country can be divided into six zones mainly North, South, East, West, and Central and Northeast zone. It has 28 states and eight union territories.

Here, we are giving ‘Summary on the Physiography of India’ as a quick revision capsule, which is very useful for the preparation of competitive examinations like UPSC-prelims, SSC, State Services, NDA, CDS, Railways, etc.

Summary on the Physiography of India

2. India is located latitudinally in the Northern Hemisphere and longitudinally in the Eastern Hemisphere. It extends from 8°4′ north and 37°6′ North in length (latitudes). And between 68°7′ East and 97°25′ East in width (longitudes). Because of this great longitudinal extent, the difference in local time between the eastern and western extremes of our country is about two hours.

3. The local time along 82° 30’ E longitudes is taken as the standard time of India i.e. Indian Standard Time (IST). This meridian is known as the Standard Meridian of India. It has an area of 3.28 million square km. It is the seventh-largest country in the world. It accounts for nearly 2% of the world’s total area. It is situated in the northern hemisphere.

4. India has a coastline of 7516.6 km of total land frontier 15200 km and Tropic of Cancer passes almost through its middle crossing over the states of Gujarat, Rajasthan, Madhya Pradesh, Chhattisgarh, Jharkhand, West Bengal, Tripura and Mizoram.

6. The Himalayas are one of the youngest fold mountain ranges in the world of tectonic origin and comprise mainly sedimentary rocks. They stretch from the Indus River in the west to the Brahmaputra River in the east. It consists of three parallel ranges such as Himadri (Greater Himalayas), Himachal (Lesser Himalaya), and Shiwaliks (Outer Himalaya).

7. Himadri (Greater Himalayas): It has an average elevation of 6100m includes some of the highest peaks and some of the important passes like Jalep La in the Chumbi Valley in Sikkim and Shipki La in the Sutlej Valley. Mt. Everest or Sagarmatha, the highest peak of the world, lies in Nepal.

8. Himachal (Lesser Himalaya): It has an average height of 3700-4500 m. The important ranges are Dhauladhar, Pir Panjal, Nag Tibba and Musoorie. Important hill resorts are Shimla, Ranikhet, Almora, Nainital and Darjiiling Valley plains and ‘Doon or Doar’ are special features of this range bordering the outer Himalayas.

9. Shiwaliks (Outer Himalaya): It is recent origin with an average elevation of 900-1200 m, giving a hogback appearance with relatively steeper slope towards the south.

10. Trans Himalayan Zones lies to the North of the Great Himalayas bordering Tibet. Some important ranges of this zone are Karakoram, Ladakh, and Zaskar. This is the largest snow field outside the polar region.

11. The Northern Plains are formed by the alluvial deposits brought by the rivers – the Indus, the Ganga and the Brahmaputra. These plains extend approximately 3,200 km from the east to the west. The average width of these plains varies between 150-300 km. The maximum depth of alluvium deposits varies between 1,000-2,000 m. From the north to the south, these can be divided into three major zones: the Bhabar, the Tarai and the alluvial plains.

12. The Indian Desert is located to the north-west of the Aravali hills lies the Great Indian Desert. It is a land of undulating topography dotted with longitudinal dunes and barchans. This region receives low rainfall below 150 mm per year; hence, it has an arid climate with low vegetation cover. It is because of these characteristic features that this is also known as Marusthali.

13. The Plateau of India is roughly triangular in shape with its base parallel to the Ganga Valley and its apex pointing towards the southern tips of the country. It is hard old mass of igneous and metamorphic rocks being part of the tectonic plate called the Gondwanaland.

16. The Western Ghat Mountain Range or Sahyadri Range is the India’s largest mountain range after the Himalayas, which extend from the Tapi river valley to the Nilgiri. It is divided into two parts- the North Sahyadri and the south Sahyadri. This range is the home of many hill stations like Matheran, Lonavala-Khandala, Mahabaleshwar, Panchgani, Amboli Ghat, Kudremukh and Kodagu.

18. The Eastern Coastal Plains lies between the Eastern Ghats and the sea coast from the Subarnarekha River to Kanyakumari. As compared to the Western Coastal Plain It is wider because the rivers like Godavari, the Krishna and the Kaveri formed the delta over there. The continental shelf extends up to 500 km into the sea, which makes it difficult for the development of good ports and harbours. In Eastern Coastal plain, there is the Kolleru Lake which situated in the delta region of the Godavari and the Krishna Rivers. Chilka Lake and Pulicat Lake is the best example of lagoon which is also found in this region.

19. There are two major island groups in India – one in the Bay of Bengal and the other in the Arabian Sea.

20. The Bay of Bengal island groups consists of about 572 islands/islets. These are situated roughly between 6°N-14°N and 92°E -94°E. The two principal groups of islets include the Ritchie’s archipelago and the Labyrinth Island. The entire group of island is divided into two broad categories – the Andaman in the north and the Nicobar in the south. They are separated by a water body which is called the 10° channel.

21. The islands of the Arabian Sea include Lakshadweep and Minicoy. These are scattered between 8°N-12°N and 71°E -74°E longitude. These islands are located at a distance of 280 km-480 km off the Kerala coast. The entire island group is built of coral deposits. There are approximately 36 islands, of which 11 are inhabited. Minicoy is the largest island with an area of 453 sq. km. The entire group of islands is broadly divided by the 11° channel, north of which is the Amini Island and to the south of the Canannore Island.