On 16 April, 1853, Indian Railways started its services and the first train travelled at a distance of 33 km from Mumbai to Thane. Do you know why different stripes are applied on the coaches of the train and why the colours of the train coaches also vary? Let's study through this article. 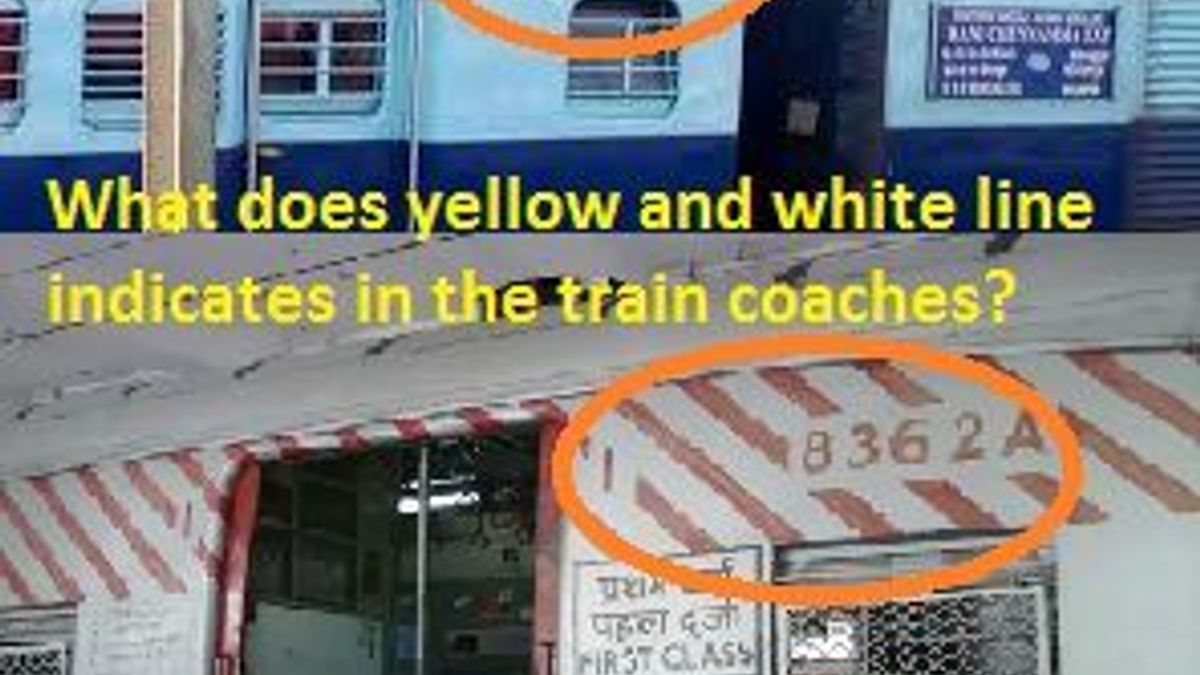 Indian Railway plays an important role in the passenger's life. The train is one of the modern means of transportation. In 1951, Indian Railways was nationalized. It is the Asia's largest Railway network and world’s second largest network operated under the same management. It has been a great journey from steam engines to diesel engines and then to electric locomotives. That is why travelling through train in India is considered as the most spectacular and unforgettable journey. Through this, people can reach anywhere in a relaxed and easy way.

Let us tell you that about 164 years ago, on 16th April 1853, Indian Railways had started its services and the first passenger train in India ran between Bombay (Bori Bunder) and Thane. That day was declared as a public holiday.

What does yellow and white line or stripes indicates on the train coaches?

On the blue ICF coach, the lines or stripes of yellow or white colour are placed on top of the window at the end of the coach, which is actually used to separate the coach from another coach. These lines indicate the unreserved coach of the second class. When a train arrives at the station, there are many people who are confused about the General Bogie, but by looking these yellow stripes, people can easily understand that this is the General Coach. Similarly, the yellow stripes on blue / red are used for the handicapped and sick people. Similarly, green stripes on the grey indicate that the coach is for women only. These colour patterns are included only for the new Auto Door Closing EMU in Mumbai, Western Railway.

Similarly, the red colour stripe indicates the first-class coach. So we have understood now why these coloured stripes are given to the train coaches and what do they indicate?

Now let's study about the colours of different coaches in the train.

There are three types of coaches in Indian Railways:
ICF
LHB
Hybrid LHB

The difference between the coaches is due to its structure, bogie, etc.

First of all, the widely-found coach is the common general ICF coach in blue colour which is used for all ICF passengers, mail express or superfast trains.

- Red colour coaches are used on the ICF air-conditioned train.

- Brown colour coaches are used on the Meter Gauge train.

In addition, some railway zones have designated their own colours, such as some trains of Central Railway follow white-red-blue colour scheme.

- The LHB coach has a default red colour which is also the colour of the Rajdhani train.

- The Gatimaan express looks like a Shatabdi train, but it has an extra yellow strip.

Do you know that Indian Railways would be repainting all Mail and Express trains, except Rajdhani, Shatabdi, Duronto and newly launched Tejas, Gatimaan and Humsafar Express, with a new colour scheme - beige and brown.

In 1990s the new colour scheme of dark blue was introduced for Mail/Express coaches, replacing the brick red colour which was in use for decades.

Now ICF coaches will be of grey and dark blue colour rather than dark blue.

The first train to sport the new look will be Delhi-Pathankot Express, 16 coaches of which have been repainted with the new colour scheme. Similarly, the colour of the rest of the other coaches will also be changed over time.

Railways would be repainting about 30,000 conventional coaches manufactured at the Integral Coach Factory in Chennai.

So, now you have understood from this article about the significance of giving yellow or white line on the train coach and also about the coloured coaches of the train.

Do you know about World's First Solar Powered Train

How to register complaints with Indian Railways