What is Flue Gas Desulphurisation?

Desulphurization is the removal of Sulphur Dioxide. The flue gas desulphurisation plants remove sulphur dioxides from the flue gas which is produced by boilers, furnaces, and other sources. Let us read in detail about the flue gas desuplhurisation. 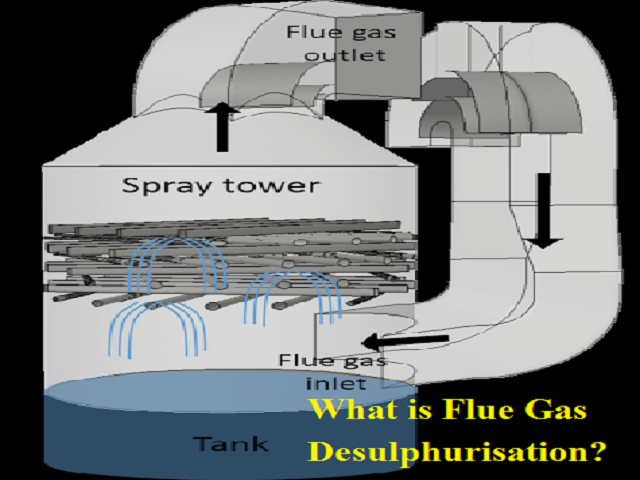 Power Ministry of India has proposed to dismiss or push back the deadlines for adoption of new emission norms by coal-fired power plants, saying "an unworkable time schedule" that would burden utilities and lead to an increase in power tariffs.

A 2017 deadline had initially set by the Centre for thermal power plants to follow the emissions standards for installing Flue Gas Desulphurisation (FGD) units that cut emissions of toxic sulphur dioxide. Later, it was changed to varying deadlines for different regions ending in 2022.

No new dates have been set under the latest proposal. However, a final judgement will need to be approved by the Supreme Court.

Nishat Kumar, an official at the Ministry of Power said that "The target should be to maintain uniform ambient air quality across the country and not uniform emission norms for thermal power plants."

He further stated that "This could avoid an immediate increase in power price in various relatively clean areas of the country (and) avoid unnecessary burden on power utilities/consumers."

What does the Power Ministry propose?

A "graded action plan" was proposed by the power ministry in those areas where plants are located would be graded according to the severity of pollution with Region 1 that is critically polluted areas and Region 5 means the least polluted.

Nishat Kumar also stated that under Region 1, strict control of emissions shall be required for thermal power stations. He also said that in region 2 plants could begin to take an action one year after those in Region 1. Also, currently, no action is required for those power plants that are situated under Region 3, 4, and 5.

We can't ignore that the cities of India have some of the world's most polluted air and much of which is blamed on coal-fired plants in close vicinity to urban centres. And bad air quality increases due to vehicular pollution, dust, industries, and crop burning.

What is Banana Grit?

It is the removal of Sulphur Dioxide. The plant of flue gas desulphurisation removes sulphur dioxides from the flue gas produced by boilers, furnaces, and other sources.

More than 300 FGD plants have been supplied worldwide and have acquired a larger market share due to the below-mentioned features:

Some common methods are as follows:

- Wet Scrubbing by using a slurry of alkaline sorbent, mainly limestone or lime or seawater to scrub gases.

- Powdered hydrated lime or other sorbent material are introduced by the Dry sorbent injection systems into the exhaust ducts to remove Sulphur DIoxide and Sulphur trioxide from the process of emissions.

It is an inorganic compound, heavy, colourless, and poisonous gas. It is produced in large quantities in intermediate steps of sulphuric acid manufacture.

It has a pungent, irritating odour, similar to the smell of a just-struck match.

In nature, it occurs in volcanic gases and in a solution of some water warm springs. Usually, it is prepared industrially by the burning in air or oxygen of sulphur or such compounds of sulphur as iron pyrite or copper pyrite.

In large quantities, sulphur dioxide is formed in the combustion of sulphur-containing fuels.

It can combine in the atmosphere with water vapour to form sulphuric acid which is a major component of acid rain.  Measures to control acid rain were widely adopted in the second half of the 20th century.

Under moderate pressures at room temperatures, sulphur dioxide can be liquified and the liquid freezes at -73 degree Celcius and boils at -10 degree Celcius under atmospheric pressure.

- It is used in the preparation of sulphuric acid, sulphur trioxide, and sulphites.

- It is also used as a disinfectant.

- It is used in a refrigerant, a reducing agent, a bleach, and food preservation mainly in dried fruits.

What is used for flue gas desulfurization?

What is the process of flue gas desulphurisation?

The process consists of a set of technologies to remove sulphur dioxide from the flue gas emissions of coal-fired power plants. Sulphur dioxide can be removed from flue gases by various methods.

What are the uses of Sulphur Dioxide?

It is used in the preparation of sulphuric acid, sulphur trioxide, and sulphites. It is also used as a disinfectant, in a refrigerant, a reducing agent, a bleach, and food preservation mainly in dried fruits.

What is Flue Gas Desulphurisation (FGD)?

It is the removal of Sulphur Dioxide. The plant of flue gas desulphurisation removes sulphur dioxides from the flue gas produced by boilers, furnaces, and other sources.