What is ‘Howdy Modi’?

Do you know about the event that was held in Houston, USA? Why Narendra Modi, the Prime Minister of India is called by name 'Howdy Modi'. Let us find out! 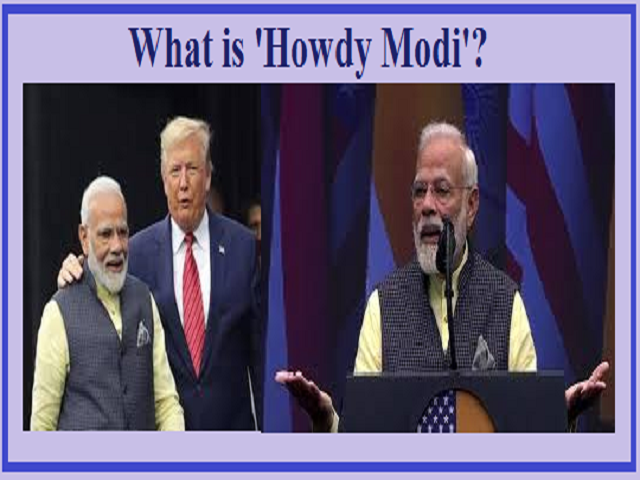 What is 'Howdy Modi'?

The event was organised on 22 September 2019 in Houston, Texas where about 50,000 people of Indian origin from across the US attended the event. It was the largest ever gathering of the Indian-origin that took place for the first time and addressed by PM Narendra Modi and US President, Donald Trump.

What is 'Howdy Modi'?

As we know that in Texas the common way of greeting is to say Howdy which means 'How are you?’. Therefore, 'Howdy Modi' means 'How are you, Modi?' It was the biggest event held for a foreign minister. When PM Narendra Modi arrived in Houston, he tweeted, 'Howdy Houston'. The President of the United States, Donald Trump had also joined the event with PM Narendra Modi.

The community summit that was hosted by the Texas India Forum (TIF) for Indian Prime Minister Narendra Modi and the President of the United States Donald Trump on 22 September 2019 at the NRG Stadium in Houston, Texas is famous as Howdy Modi summit.

The 'Howdy Modi' summit was organised with the support of more than 1,000 volunteers and 650 Texas-based Welcome Partner organisations.

Texas India Forum (TIF) is a non-profit organisation that encourages cooperation between the United States and India by focusing on the shared values of democracy, inclusive economic development, and mutual respect. The main objective of TIF is to bring together Indian-American organisations and institutions to foster collaboration within the region and generate more opportunities for engagement with India. The cost of the event was covered by the donations from the general public. TIF is a Texas-based 501(c)(3) approved not-for-profit corporation bearing EIN 84-2398788. Let us tell you that all the contributions given to TIF are officially tax-deductible.

- Farewell has been given to Article 370 by the PM Narendra Modi.

- The event tagline was ‘Shared Dreams, Bright Futures’. It focuses on the contribution of Indo-Americans in the United States and also a strong and lasting partnership between India and the US.

- Some cultural programmes were performed by Indian-American artists from Texas.

- PM Narendra Modi told that time has come to battle against terrorism and against those who promote terror.

- Focused to generate a transparent ecosystem to ensure development.

- He also said it is time to give farewell to outdated laws and complicated tax structure.

- He also focused on Ease of Doing Business to Ease of Living.

- On the 150th birth anniversary of Mahatma Gandhi, India will bid farewell to open defecation.

- He also focused on diversity which is the foundation of our vibrant democracy.

- Border security is crucial to both the US and India.

- Donald Trump, the President of the US also told that India has lifted nearly 300 million out of poverty which is an incredible number.

Therefore, the event that was organised by TIF in Houston, Texas for PM Narendra Modi and President Donald Trump on 22 September 2019 at NRG Stadium is famous as Howdy Modi event. In Texas Howdy means ‘How are you’ and PM Narendra Modi was greeted by saying ‘Howdy Modi’ so it becomes famous.