World Oceans Day 2022: It is observed on June 8 every year to spread awareness about the role of oceans on Earth. Oceans are said to be the lungs of our planet. Take a look at the theme of this year, history, significance, and more.

World Oceans Day 2022: According to the UN, at least 50% of the oxygen is produced by the ocean. The ocean is key to our economy, with an estimated 40 million people being employed by ocean-based industries by 2030. Also, 30% of carbon dioxide is absorbed by the oceans, which is produced by humans, buffering the impacts of global warming.

World Oceans Day is observed on June 8, which is a day for humanity to celebrate the ocean. The ocean connects, sustains, and supports us all.

World Oceans Day highlights the need for Oceans in our lives and emphasizes the reason to protect them from being deteriorated. Recent plastic waste in the oceans has raised eyebrows and calls for the Governments of the world to be proactive.

The day provides a unique opportunity not only to honor but also in conserving and in protecting our oceans.

it is observed on 8 June,  to raise global awareness about the importance of the ocean in our lives and the ways through which we can protect it.

It's an individual's duty to participate and contribute to protecting and preserving our shared ocean. So, it is desirable to get together with our family, friends, and community to create a better future for our planet.

It is rightly said that "Without water, our planet would be one of the billions of lifeless rocks floating endlessly in the vastness of the inky-black void."— Fabien Cousteau

The oceans are the lungs of our planet; provide oxygen for breathing, are a major source of food & medicine, and are a critical part of the biosphere.

We know that the 3/4th part of our whole earth is full of water; it is our responsibility to save our ocean and marine life from the danger of global warming. It is no doubt that World Oceans Day is a big step toward saving the equilibrium of water and lives on earth.

The theme for World Oceans Day 2022 is  Revitalization: Collective Action for the Ocean.

The focus of this year's theme is on the life and livelihood that the ocean sustains. Oceans have a lot of plastic waste being disposed of in them which is degrading the life in them and causing the ocean life to suffer.

The theme for World Oceans Day  2021 was " The Ocean: Life and Livelihoods" .

The theme for World Oceans Day  2019 was “Gender and Oceans”.

The Theme of World Oceans Day 2018 was “Preventing plastic pollution and encouraging solutions for a healthy ocean”.

So, it is obvious that fish eat plastic and we eat fish.

This day is celebrated every year with a proper theme to give knowledge about the ocean and its effects on the daily life of the people.

The concept of World Ocean Day was proposed at the Earth Summit in Rio de Janeiro in 1992. Officially World Ocean Day was established by the United Nations General Assembly in 2008 to be celebrated worldwide annually on 8 June to resolve the problems of oceans and also to save ocean water.

On 8 June 2009, the day was officially declared by the United Nations General Assembly by its resolution 63/111.

Even for engaging more youth in the campaign and for saving ocean water several messages are spread through social media.

Importance of Oceans on Earth: 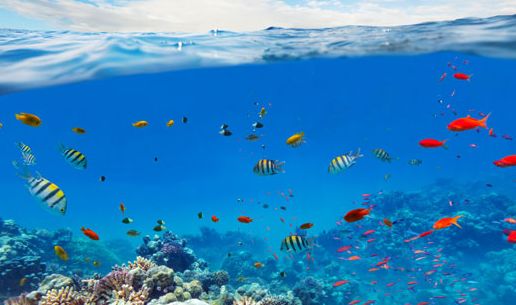 - Oceans are the lifeblood of the planet Earth and humankind.

- According to the U.S. Geological Survey, there are over 332,519,000 cubic miles of water on the planet.  A cubic mile is the volume of a cube measuring one mile on each side

- About 30% of carbon dioxide produced by humans is absorbed by the oceans, buffering the impacts of global warming.

- Ocean provides a good range of goods and services that are an integral part of our health, economies, and also for our weather like fisheries, shipping routes, etc.

- Oceans are an integral part of our water cycle.

- Ocean controls temperature and weather by absorbing over half the heat reaching the Earth from the sun.

- A vast amount of greenhouse gas that is carbon dioxide (CO2) is absorbed by ocean water and help human in tackling the problem of global warming and climate change.

- Marine plants also produce half of the oxygen that we and all other land animals breathe.

- The ocean is home to the greatest abundance of life on our planet.

- Do you know that over 3 billion people depend on marine and coastal biodiversity for their livelihoods?

Therefore, we can’t ignore that

"The real cure for our environmental problems is to understand that our job is to salvage Mother Nature. We are facing a formidable enemy in this field. It is the hunters... and to convince them to leave their guns on the wall is going to be very difficult." — Jacques Yves Cousteau, Oceanographer

Save Ocean! Save Water!

Important Days and Dates in June 2022

Get the latest General Knowledge and Current Affairs from all over India and world for all competitive exams.
Comment (7)