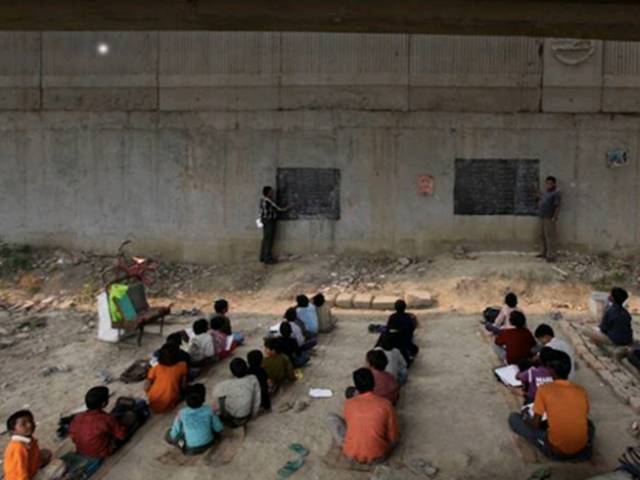 ‘The Free School under the Bridge’ run by Rajesh Kumar Sharma underneath a metro bridge in the nation’s capital is making headlines. Sharma has been running a makeshift school; where over underprivileged children from the nearby Yamuna Bank area have been coming to study for the past eight years. The school has is being run by the shopkeeper without any assistance neither from the government or any NGOs.

A resident of Delhi’s Laxmi Nagar area, Sharma who runs a small grocery shop in the area hails from Hathras district of Uttar Pradesh. The 49 year-old is the educator of more than 300 children living in shacks and hutments close to the Yamuna Bank metro station. The children, aged between four and 14 years, attending his makeshift school come from families of slum dwellers, ragpickers, rickshaw-pullers and beggars. The school began with two children in 2006 with Sharma as the sole teacher and today is run in two shifts from 9 to 11 AM for 120 boys and 2 to 4.30 PM for 180 girls, with the help of seven teachers who live in nearby areas and in their free time, volunteer to teach the students.

The school with Delhi metro bridge as its roof has five blackboards painted on the wall of the metro complex and some stationary such as chalks and dusters, pens and pencils. The ground is covered with carpets for the children to sit and they bring their own note books and study in groups. As the place is far off from the hustle-bustle of the city, the children can study there and the noise of frequently passing metro trains is hardly noticed by the students.

Sharma could not complete his graduation due his family's poor financial condition. He believes that no one should be deprived of education due to poverty and to fulfill his or her dream. This is why he dedicates over 50 hours a week to the children. He says no government representative has yet approached him for financial assistance of any kind although he has witnessed many regime changes ever since he started his journey 13 years ago. He, however, has no complaints as his goal is to educate these poor children.

In addition to conducting regular classes for the students, Sharma also gets them enrolled into the nearby government schools and makes sure that they devote sufficient time to their education. He maintains a record of the students and keeps record of their attendance. The children are also taught the value of cleanliness and there are also separate toilets for boys and girls near the school.