CBSE Class 12 Geography Sample Paper 2022-23: CBSE board has released all sample question papers and marking schemes for the board examinations of 2022-23. Directly view and download the PDF of Geography sample paper and marking scheme at Jagran Josh.

Along with sample papers for Geography, the board has also released the marking scheme for the subject.

Now that the CBSE Class 12 Geography Sample Paper 2022-23 is out, candidates are all geared up to work hard and score the highest. But, remember that it is not all hard work. If planned and studied smartly using the help of resources provided by the board, students can easily get more marks.

Before going straight to the question paper, click here to check the syllabus for Class 12 Geography as prescribed by CBSE.

Let us now check out the sample paper for Geography 2022-23.

The general instructions provided in the CBSE Class 12 Geography Sample Question Paper 2022-23 are as follows:

Students of class 12 can see the complete content of the CBSE Class 12 Geography Sample Question Paper 2022-23 below and prepare for their upcoming CBSE Class 12 Board Exam 2022-23.

There are 17 questions in this section. All are mandatory.

1. Which two cities are connected by Channel Tunnel?

a. London with Barcelona

b. London with Berlin

2. Which of the following pairs is matched correctly?

3. Which of the following may be interpreted as a spontaneous effortto achieve a better balance between population and resources?

4. Which of the following features is related to the second stage of Demographic Transition Theory?

5. What is the major export from New Mangalore ports?

6. Which of the following is a feature of Kandla Port?

7. Which of the following is incorrectly matched?

8. Identify the correct order of location from west to east, for the given natural gas reserves of India.

9. Which of the following are industrial towns of India?

10. Which of the following are the features of Urban Settlements in India?

11. Arrange the following in correct sequence:

Following is the sequence of generating geothermal :

(i) It is so hot that when it rises to the earth's surface, it turns into steam.

(ii) Groundwater in such areas (where the geothermal gradient is high) absorbs heat from the rocks and becomes hot.

(iii) This steam is used to drive turbines and generate electricity.

12. Consider the following statements and choose the correct option from the given options

13. Assertion: Settlements can be of various types.

14. Assertion; Mediterranean regions have been inhabited from early periods in history.

Reason; Plain areas are favorable for the production of crops and to build roads and industries.

Read the following case study and answer question no 15 to 17.

Ralegan Siddhi is a small village in the district of Ahmadnagar, Maharashtra. It has become an example for watershed development throughout the country. In 1975, this village was caught in a web of poverty and illicit liquor trade. The transformation took place when a retired army personnel settled down in the village and took up the task of watershed development. He convinced villagers about the importance of family planning and voluntary labour; preventing open grazing, felling trees, and liquor prohibition. Voluntary labour was necessary to ensure minimum dependence on the government for financial aid. Even those who were working outside the village contributed to the development by committing a month's salary every year. Work began with the percolation tank constructed in the village. In 1975, the tank could not hold water. The embankment wall leaked. People voluntarily repaired the embankment. The seven wells below it swelled with water in summer for the first time in the living memory of the people. The people reposed their faith in him and his visions. A youth group called Tarun Mandal was formed. The group worked to ban the dowry system, caste discrimination and un touch ability. Liquor distilling units were removed and prohibition imposed. Open grazing was completely banned with a new emphasis on stall feeding. The cultivation of water intensive crops like sugarcane was banned. Crops such as pulses, oilseeds and certain cash crops with low water requirements were encouraged. All elections to local bodies began to be held on the basis of consensus. "It made the community leaders complete representatives of the people." A system of Nyay Panchayats (informal courts) were also set up. Since then, no case has been referred to the police. A Rs. 22 lakh school building was constructed using only the resources of the village. No donations were taken. Money, if needed, was borrowed and paid back. The villagers took pride in this self-reliance. A new system of sharing labour grew out of this infusion of pride and voluntary spirit. People volunteered to help each other in agricultural operations. Landless labourers also gained employment.

15. Which of the following methods of water conservation brought prosperity in Ralegan Siddhi?

16. Which of the following measures were taken to increase democratic participation in the village?

(a) Construction of school

17. Which of the following made Ralegan Siddhi independent of government's financial aid?

(a) Prohibition of liquor

18. Read the given Passage carefully and answer the questions that follow:

Bharmaur tribal area comprises Bharmaur and Holi tehsils of Chamba district of Himachal Pradesh. It has been a notified tribal area since 21 November 1975. Bharmaur is inhabited by „Gaddi‟, a tribal community who have maintained a distinct identity in the Himalayan region as they practiced transhumance and conversed through Gaddiali dialect. Bharmaur tribal region has harsh climate conditions, low resource base and fragile environment. These factors have influenced the society and Economy of the region. According to the 2011 census, the total population of Bharmaur sub-division was 39,113 i.e., 21 persons per sq km. It is one of the most (economically and socially) backward areas of Himachal Pradesh. Historically, the Gaddis have experienced geographical and political isolation and socio-economic deprivation. The economy is largely based on agriculture and allied activities such as sheep and goat rearing. The process of development of the tribal area of Bharmaur started in the 1970s when Gaddis were included among „scheduled tribes‟. Under the Fifth Five Year Plan, the tribal sub-plan was introduced in 1974 and Bharmaur was designated as one of the five Integrated Tribal Development Projects (ITDP) in Himachal Pradesh. This area development plan was aimed at improving the quality of life of the Gaddis and narrowing the gap in the level of development between Bharmaur and other areas of Himachal Pradesh. This plan laid the highest priority on development of transport and communications, agriculture and allied activities, and social and community services.

1) How have the Gaddi Tribal Community maintained a distinct identity in the Himalayan region?

2) Which factors have influenced the society and Economy of the region to remain backward?

3) Under the Integrated Tribal Development Project, Which areas were given the highest priority?

19. Observe the given map and answer the following questions: 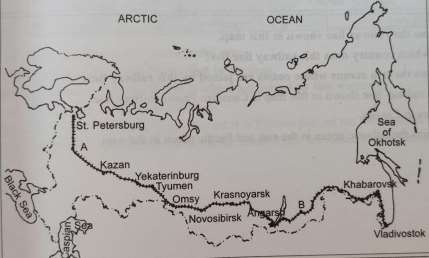 1) Name the Railway line and name the country where it lies.

3) State two reasons why it is the most important route in Asia?

For Visually Impaired Students in lieu of Q.No. 19

1) Name the longest Railway Line of Asia. In which country it is located.

3) Give two reasons why it is the most important route in Asia?

20. What is meant by the density of population? Explain with examples the physical and economic factors which affect population distribution.

With the help of a neat and labeled diagram, explain the three stages of the Demographic Transition Theory.

21. Examine the features of cottage manufacturing or household industries.

22. How is „Naturalisation of Humans‟ different from „Humanisation of Nature‟?

23. Elucidate any 3 characteristics of the most effective and advanced personal communication system in India.

Question numbers 24 to 28 are Long Answer based questions.

24. Describe the main characteristics of Intensive Subsistence Agriculture. In which parts of the world this type of agriculture is practiced?

25. Discuss the problems of Slums and Urban Waste Disposal in developing countries like India.

26. How have good governance and people-oriented policies with reference to the pillars of human development, increased the values of freedom and capabilities?

27. Justify the tremendous growth of the Service Sector in developed and developing countries than the manufacturing sector? Explain giving suitable examples.

28. Analyse any five problems faced by Indian farmers in agriculture.

On the basis of the main source of moisture for crops, analyse the types of farming in the Indian scenario.

Question numbers 29 & 30 are Map based questions having 5 sub-parts each.

29. On the given political map of the world, the following seven features are shown. Identify any five of these features and write their correct names on the lines marked near each feature.

For Visually Impaired Students in lieu of Q.No. 29 (Attempt Any 5) 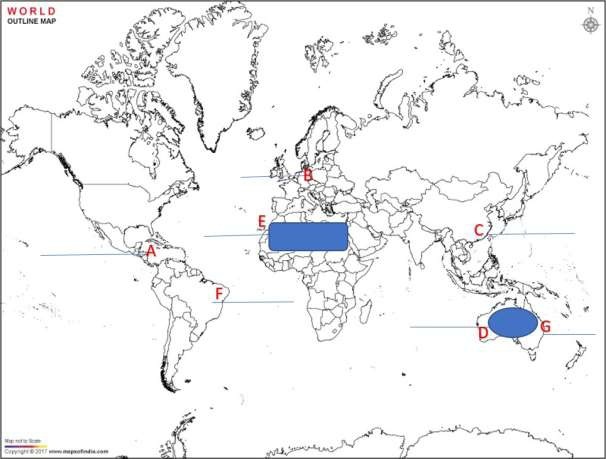 30. On the given political map of India, locate and label any five of the following with appropriate symbols:

For Visually Impaired Students in lieu of Q.No. 30 (Attempt Any 5) 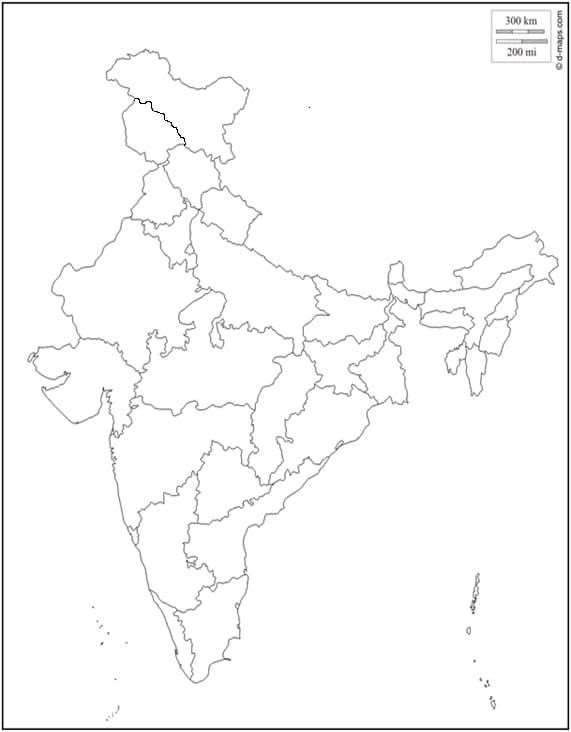 The CBSE Class 12 Geography Sample Paper 2022-23 is here in pdf format for you to download and print.

The marking scheme of the CBSE Class 12 Geography Sample Paper 2022-23 in pdf format is attached below.

According to the latest syllabus prescribed by CBSE, the syllabus from Unit-1, Ch. 1 and Unit-10, Ch.12 for Map Work in CBSE Class 12 Geography is NIL.

Can I study Geography in CBSE class 12 in Hindi?

Yes, the prescribed textbooks for CBSE Class 12 Geography are also available in Hindi.