Q2. There are 106 radioactive nuclei in a given radioactive element. Its half life is 20 seconds. The number of nuclei will remain left after 10 seconds are:

Number of nuclei after n half lives is given by:

Q3. The half life period of a radioactive material if its activity drops to (1/16)th of its initial value in 30 years is

Number of Nuclei left after n half-lives is given by

Q5. The disintegration energy Q for fission of 42Mo98 into two equal fragments 21Sc49 by bombarding with a neutron is:

The disintegration energy in fission of 42Mo98 is given by

Q6. A radioactive nucleus ‘A’ undergoes a series of decays according to the following scheme :

Emission of 2 alpha particles decreases the mass number by 8 and charge number by 4.

Emission of one β particle increases the charge number by 1 without affecting mass number.

(a) isobar of parent

(b) isomer of parent

Q8. In a sample off radioactive substance, what percentage decays in one mean life time?

Q9. The binding energy per nucleon for the parent nucleus is E1 and that for the daughter nuclei is E2. Then

Q10. Half-lives of two radioactive substances A and B are respectively 20 minutes and 40 minutes. Initially the samples of A and B have equal number of nuclei. Find the ration of remaining number of A and B nuclei after 80 minutes. 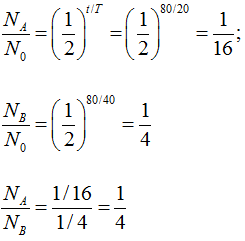