In this article you will get the chapter notes for the CBSE Class 9 Science Chapter - Is Matter Around Us Pure. This part is in continuation with the Part-I.

CBSE Class 9 Science Is Matter Around Us Pure Chapter notes

Main topics covered in this part of CBSE Class 9 Science Chapter Is Matter Around Us Pure Notes, are:

→ Methods for separation of mixtures

These chapter notes are prepared by the subject experts to discuss every important topic from the chapter. In between these notes you can try the questions asked from the discussed set of topics. These questions will help you to track your preparation level and get a hold on the subject.

Key notes for Chapter- Is Matter Around Us Pure, are:

Properties of a Suspension:
(i) It is a heterogeneous mixture.
(ii) The particles of a suspension can be seen by naked eyes.

(iv) A  colloid is quite stable.
(v) Colloidal particles cannot be separated by the process of filtration.

Tyndall Effect: The scattering of light by the colloidal particles is known as Tyndall effect.

It can be observed when:

CBSE Class 9 Science, Is Matter Around Us Pure: Important Topics and Questions

(ii) Dispersion Medium: The component in which the dispersed phase is suspended is known as the dispersing medium.

Different types of colloids are discussed in the table given below:

For example - Rusting of iron, bumning a piece of paper etc.

Difference between Physical and Chemical changes:

Q1. How will you distinguish a colloid from a solution?

Q2. What is effect of temperature on the solubility of solids in liquids?

Q3. Sea water can be classified both as a homogeneous as well as a heterogenous  mixture. Comment?

Q4. Distinguish between the following as physical changes and chemical changes?

(a) Burning of a magnesium wire

(b) Rusting of iron

(d) Glowing of an electric bulb

The separation of components of a Mixture:

Some of the important methods used to separate different mixtures are explained below::

Evaporation is a process which is used to separate a solid substance dissolved in liquid. It is based on the fact that liquids vaporize easily whereas solids do not. 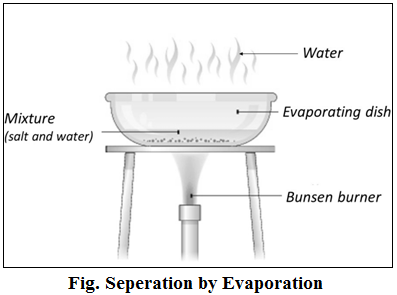 It is a method of separating the suspended particles of a substance from a liquid in which the mixture is rotated at high speed in a centrifuge.

This method is useful in case the suspended particles in a liquid are too small too be retained by filter paper. 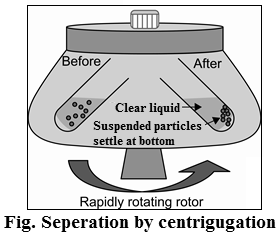 It is used to separate a mixture of two immiscible liquids, like oil and water. 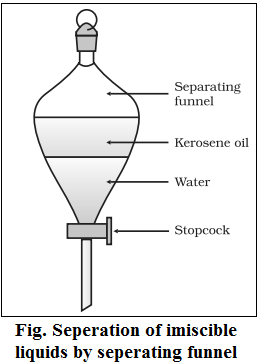 When a mixture of two immiscible liquids is kept in a separating funnel,  the liquids separate out in layers depending on their densities with the heavier forming the top layer.
Applications of Separating funnel:

This method is used to separate those components from a mixture which can sublime on heating.

For example: Ammonium chloride, camphor, naphthalene etc, can be separated from their mixture by sublimation 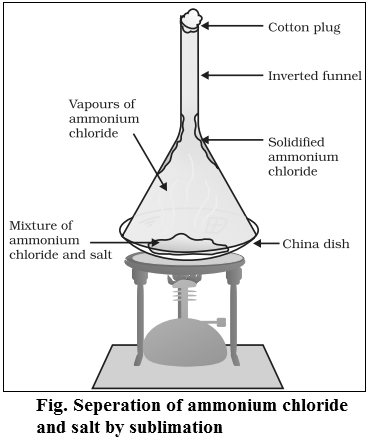 This method is used to separate two or more dissolved solids which are present in a solution in very small quantities.

This method of separation is based on the fact that though two substances are dissolved in the same solvent but their solubilities can be different. The component which is more soluble in, rises faster and gets separated from the mixture.

This method is used to separate a mixture solid in a liquid. It is the process of heating the liquid to form vapour, and then cooling the vapour to get back liquid.

It is used for the separation of components of a mixture containing two miscible liquids that boil without decomposition and have sufficient difference in their boiling points. 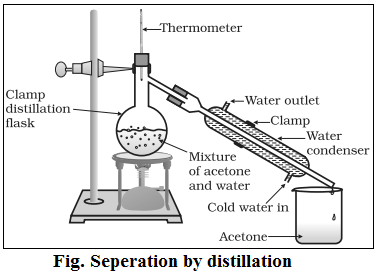 The volatile liquid evaporates on heating which can be recovered by cooling its vapours by the process of condensation.

It is the process of separating two or more miscible liquids by distillation, the distillate being collected in fractions due to boiling at different temperatures. 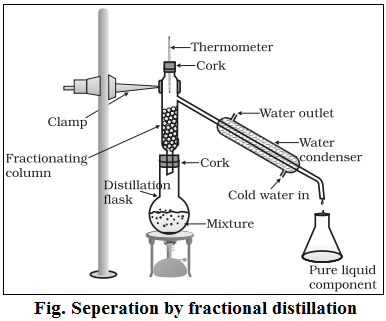 Crystallisation is a process used to separates a pure solid in the form of its crystals from a solution. The process involves cooling a hot, concentrated solution of a substance to obtain crystals.

Q2. Which of the following will show Tyndall effect:
(a) Salt solution
(b) Milk
(c) Starch

Q3. How will you separate a mixture of iron filings, chalk powder and common salt?

Q4. Discuss the process of purification of impure copper sulphate by crystallization.

Q5. Explain how nitrogen, oxygen and argon gases are separated from air?