Here you will get the CBSE Class 9 Science Practice Paper for the Summative Assessment-II, 2017. This paper will also make you familiar with the latest CBSE Exam Pattern and also help you get an idea of the important topics to be picked to prepare for SA-II, 2017. 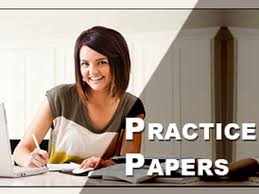 Jagranjosh.com, India’s leading education portal, presents CBSE Class 9 Science Practice Paper for Sumamtive Assessment-II, 2017. This practice paper is specially prepared by the subject experts after the brief analysis of previous year question papers. It consists of the important questions framed as per the latest cbse exam pattern. This paper will surely help the students in understanding the depth with which a topic should be studied in order to prepare in a more effective way to get the desired results.

2. Why is the skin of amphibians moist?

3. Name the uncharged particle present inside the nucleus.

4. Explain the term variable valency with the help of two examples.

6. On a cloudy day, the sound of thunder was heard 10 seconds after the flash of lightning Find the distance of the clouds. Take, speed of the sound in air was 342 ms-1.

7. Give reason for the following:
(a) Nucleus of an atom is charged
(b) Noble gases show low reactivity.
(c) An atom is electrically neutral.

8. Define work. State the conditions under which work is said to be done by a force on an object?

12. A ball is thrown vertically upwards and returns to the thrower after 12 sec (g = 9.8 m/s2). Find:
(i) The velocity with which It was thrown up
(ii) The maximum height it reaches.
(iii) Its position after 8 sec.

13. (a) List any two benefits of classification.
(b) Why bryophytes and pteridophytes grow in moist and shady places?

14. Presence of certain features provides the basis for classifying an organism as a chordate. Mention any four features. Name a protochordate.

15. Give reasons for the following:
(a) Bryophytes are called amphibians of the plant kingdom.
(b) Bacteria and tapeworms are very different in their body design.
(c) Fungi are called saprophytes.

16. What is reverberation? How can it be reduced? Give two applications of reflection of sound wave.

18. Agriculture is the occupation in India with three fourth of its total population being engaged in agriculture. Even though financial conditions or some farmers do allow them to take higher level farming practices and improved agriculture technology, yet they are hesitant to use or HYV seeds with traits such as resistance to disease and, high quality that would result finally in higher yield. The Governments’ Kisan channel solved all their apprehensions.
(i) What is meant by genetically modified crops?
(ii) What are the desired agronomic characters for fodder and cereal crops?
(iii) In your opinion what should be done so that the modern agriculture technology is adopted by most of the farmers?

20. (a) Briefly explain why some objects sink but others float when immersed in a liquid.
(b) When a boat is partially immersed in water, it displaces 500 kg of water. How much is the buoyant force acting on a boat in Newton (g = 10 m/s2)

22. (a) Explain why are root nodules useful for the plants ?
(b) List and explain any three causes of ‘water Pollution'.

23. List two differences between thrust and pressure. What is meant by 1 Pascal and 1 Newton? How will the pressure change if area of contact is doubled?

25. (a) What are the conditions required by an object to float on water?
(b) Give reason for the following:
(i) A ship made of iron floats while a piece or nail sinks.
(ii) Solid form of water (ice) floats on water.

29. Which of the following is an example of pulse:
(a) Shock waves caused by the supersonic plane.
(b) Sound waves produced by the clapping of hands
(c) Formation of water waves when a stone is dropped into it.
(d) Giving a jerk to a string tied at one end.

30. Paramecium has tiny hair like projections all around the outside of their cell that give the paramecium locomotion and help the food to move in its oral cavity.

31. The main symptoms of the HIV-AIDS infection are due to the fact  that patient’s body can no longer fight off many minor infections and hence becomes the reason of the patient’s ultimate death.
This happens because:
(a) HIV virus alone causes all the infections
(b) HIV virus releases a poison in the body
(c) HIV virus damages the immune system of the body
(d) HIV virus directly attacks the human nervous system

33. Aquatic organisms are used to a certain range of temperature in the water bodies where they live. A sudden marked change in this temperature  can affect:
(a) Breeding of animals
(b) More growth of the aquatic plants
(c) Process of digestion in animals
(d) Availability of nutrients

34. State two factors on which buoyant force acting on an object immersed in a fluid depends?

35. A spring balance calibrated in Newton reads 19.6 N. Calculate its mass in grams.

Get solution to all these questions from this link