Understanding the gap between private and public schools!

For a country that is claiming its seat as a superpower in every sense of the term, India’s education sector has still a long way to go if it ever wants to compete with the best in the world. In this article we will discuss the gap between private and public schools.

For a country that is claiming its seat as a superpower in every sense of the term, India’s education sector has still a long way to go if it ever wants to compete with the best in the world. Many have attributed the lapses in India’s education sector to the poor planning and execution of education policy at school level. One of the key critiques of India’s school level education has been the evident and ever expanding gap between the public sector schools and the private sector schools. While, there are many recognized private schools that impart quality education at par with their peers abroad, government schools have failed to match up with the bare minimum basic criteria setup by the government, when it comes to education. Below, we shall try to discuss debate and evaluate the differences, pros and cons as well as efforts that need to be implemented in order to empower India’s education sector.

Types of Schools in India

India follows a three tier setup as far as schooling is concerned. Generally, one would find government schools, government aided schools and private schools as the available options for school level education in India. In order to better understand this, we will try to define different types of schools below: 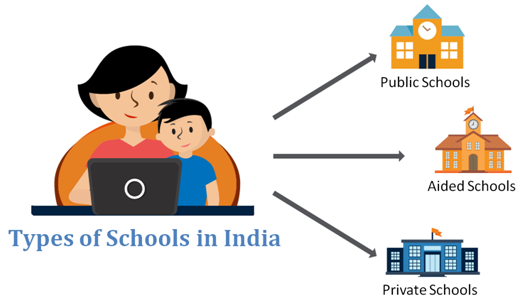 Public Schools: These schools are completely owned and administered by the respective state governments and central governments. Generally, such schools charge minimum fees or provide free education to students. They educate a bulk of Indian population not only in rural areas but also in urban centres where cost of education in private and aided schools is very high. However, when it comes to infrastructure and facilities, these schools seems to be lacking even the basic ones.

Government Aided Schools: These schools receive funding from the government to run their school; however the management and administration is done either by a management body, trust or a private institution. As they receive grants from government they have to abide by several policies and rules put forth by the HRD ministry and education department of the respective state government. In terms of infrastructure and facilities, they fare far better compared to government schools.

Private Schools: Coming to the much debated and discussed private schools; these are the schools that are funded and run by private institutions. They do not accept any grant or funding from the government and therefore have relative autonomy when it comes to management and administration. They offer best infrastructural facilities to the students and recover the cost for it directly from the students/parents. In simple words, while they are great when it comes to facilities, they charge exuberant fees for education. Despite having relative autonomy, they still have to abide by the basic ground rules put forth by the government.

The debate about the comparative analysis of public schools v private schools in India has been a hot topic of discussion among academicians as well as parents for a long time now. One of the key points on which this debate ranges has been the clichéd ‘quality v quantity’ aspect. With the implementation of ‘Right to Education’ and steps such as free compulsory free education for each child till the age of 14 years; government schools have been the primary tools of education in the country. Currently, government schools provide education to majority of population of the country in rural areas. Even in urban centres, as the fees of private schools is quite high, middle and lower middle class students often choose government sector for school level education. In simpler terms, government schools cater to the quantity aspect by making available school level education to available to a greater number of people and are normally doing it for free or for fees that are really within the reach of everyone.

If we move towards the other end of the spectrum, private schools are known for providing quality education to the few who are able to afford the same and are ready to pay a higher premier for it. While the syllabus followed by both government schools and private schools are essentially the same, the difference comes in when we talk about teaching pedagogy, style along with the facilities and infrastructure offered to the students. In addition to the core syllabus, these private schools offer several additional extracurricular activities that enhance the personality and skill set of students; giving them an advantage over their peers form government schools.

With both the types of targeting different type of students, many have deemed the debate moot and the comparison to be unviable. While on the other hand, several academics have suggested that private schools should act as case studies for government and government aided schools, who can implement the steps implemented by private schools for the overall betterment of education sector in the country. Plus, as the public schools cater to the majority of the popular of the country, if we want to bring out real reforms in India’s education sector, targeting public sector schools in order to not only improve the quality but also the infrastructure is the first step in the line.