In IAS Prelims Preparation, current affairs should be given precedence as it is the most dynamic and crucial part of the prelims question paper. Hence, here we provide Current Affair quiz based on the recent happenings of April 2017 for IAS Prelims 2017.

We will continue to provide the current affairs questions for IAS Prelims 2017 to help you gain a better insight of how questions can be asked in the examination.

1. India’s first underwater metro tunnel has been assigned to be constructed between which two twin cities?

Recently, the construction of the first underwater metro tunnel in the country has begun inside the bed of the Hooghly River. The two tunnels running parallel will connect the twin cities of Howrah and Kolkata located on either side of the Hooghly. 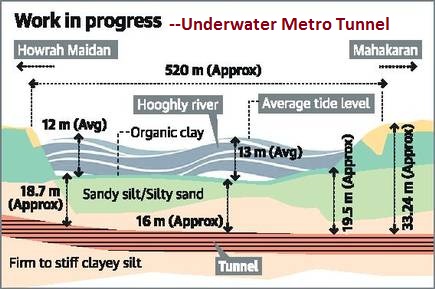 The twin tunnels are crucial to the much-awaited East-West Metro project that will connect Salt Lake Sector V in the eastern part of Kolkata to the Howrah Maidan across the river.

Alongside, a dense concrete layer is being used to seal the tunnel, prevent the subsidence of earth, and stop seepage of water which is a primary concern for the engineers working on any water tunnel. The protective measures subsequently taken by the engineers included widening the foundation of the building and grouting of the soil.

However, the last hurdle being faced by the East-West Metro Project is the threat the tunnelling work may pose to three heritage buildings in Kolkata. The Currency Building, an Italian structure that served as one of the first banks in the country, and two 19th century Jewish monuments that stand close to the Metro tunnels.

2. Consider the following statements regarding the Government e-Marketplace(GeM):

1) GeM is a completely paperless, cashless and system driven e-marketplace.

2) The Government developed GeM portal for procurement of Products only.

Government e-Marketplace (GeM) is a very bold step of the Government with the aim to transform the way in which procurement of goods and services is done by the Government Ministries/Departments, PSUs, autonomous bodies etc.

Government e-Marketplace (GeM) is a completely paperless, cashless and system driven e-marketplace that enables procurement of common-use goods and services with the minimal human interface.

GeM owes its genesis to the recommendations of two Groups of Secretaries made to the Hon’ble PM in January 2016. They recommended setting up of a dedicated e-market for different goods & services procured/sold by Government/PSUs besides reforming DGS&D.

DGS&D with technical support of NeGD (MeitY) has developed GeM portal for procurement of both Products & Services. Procurement on GeM has been authorised by GFR by adding Rule 141A.

1) The Goldman Environmental Prize is a prize awarded annually to grassroots environmental activists.

2) It is also called the Green Nobel.

3) The Prize is given to one from each of the world's four geographic regions that are Africa, Asia, Europe and Americas.

Mr Samantra was one of the key leaders responsible for rallying tribes, indigenous to Odisha's Niyamgiri region, and using legal provisions to thwart mining-to-metals conglomerate, Vedanta. The company has been forced to suspend plans to mine bauxite.

The Goldman Environmental Prize is a prize awarded annually to grassroots environmental activists, one from each of the world's six geographic regions: Africa, Asia, Europe, Islands and Island Nations, North America, and South and Central America.

The prize is given by the Goldman Environmental Foundation headquartered in San Francisco, California. It is also called the Green Nobel.

I. APY is available for all citizens of India in the age group of 18-30 years.

II. Under the APY, the subscribers would receive a minimum guaranteed pension of Rs. 1000 to Rs. 5000 per month from the age of 60 years.

III. Pension will depend on their contributions, which depends on the age of the subscriber at the time of joining the APY.

The Atal Pension Yojana (APY) is an ambitious scheme and it was launched by the Prime Minister Narendra Modi on 9th May 2015 with effective from 1st June 2015. APY is available for all citizens of India in the age group of 18-40 years. Under the APY, the subscribers would receive a minimum guaranteed pension of Rs. 1000 to Rs. 5000 per month from the age of 60 years, depending on their contributions, which depends on the age of the subscriber at the time of joining the APY. The Same amount of pension is paid to the spouse in case of subscriber’s demise.

After the demise of both i.e. Subscriber & Spouse, the nominee would be paid with the pension corpus. There is an option for Spouse to continue to contribute for the balance period of the premature death of subscriber before 60 years, so as to avail pension by Spouse.

There are tax benefits at entry, accumulation and pension payment phases. If the actual returns on the pension contributions during the accumulation phase are higher than the assumed returns for the minimum guaranteed pension, such excess returns are passed on to the subscriber, resulting in enhanced scheme benefits.

Recently, the orientation programme for the establishment of SFPCs and buyer-seller meet has been inaugurated at Itanagar, Arunachal Pradesh. It is a Government of India’s initiative to benefit the small and marginal spice farmers in the North Eastern States.

The objective of the programme is to operationalize SFPC on a pilot basis in 3 districts viz. Ziro in Lower Subansiri District for large cardamom and Namsai in Namsai District for ginger in Arunachal Pradesh & West District in Sikkim for large cardamom for empowering the farmers, especially women farmers in the identified spices growing districts, for better price realization through post-harvest management, primary processing, value addition, packing, aggregation, organic certification etc.