Do you know that an ostrich's eye is bigger than its brain?

This article will make you familiar with the ostrich’s bigger eyes and the benefits they serve to the animal.

Q. Do you know that an ostrich's eye is bigger than its brain? 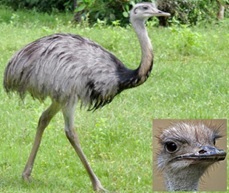 Ans. Ostrich is the largest bird in the world having the largest eyes in the whole animal kingdom that are even bigger than its brain. An ostrich's eyes are about 2 inches (5 centimeters) in diameter, i.e. almost of the size of a billiard ball. The ostrich needs large eyes to adapt to its terrestrial lifestyle. On sighting any danger, it doesn’t hide its head in the sand as is popularly believed. Thanks to the long neck and legs which make it stand upto the height of 9 ft, it enjoys an excellent view over the grassland and bush. Its large eyes with a high number of photoreceptor cells combined with the sheer size of the image from the lens help the ostrich to see phenomenal details of the predators even from great distances. So, if it sees something trying to sneak upon it then it will run away as fast as it can with its big, long powerful legs.