India needs to generate jobs that are formal and productive, provide bang-for-buck in terms of jobs created relative to investment and have the potential for greater social transformation growth.

The apparel and leather and footwear sectors meet many or all of these criteria and hence are eminently suitable for targeting. Recognising this, the government announced important steps to incentivize the production and exports of apparel while corresponding policy initiatives for leather products is a subject of discussion.

The apparel and leather sectors face a set of common challenges in logistics, labour regulations, and tax & tariff policy, and disadvantages emerging from the international trading environment. In addition, the leather and footwear sector faces the specific challenge relating to policies that prevent converting its comparative advantage that is the abundance of cattle into export opportunities.

A. Why target only clothes and footwear sector?

• In the emerging East Asian Economics, nearly every successful economic growth take-off in post-war history has been associated with rapid expansion in clothing and footwear exports in the early stages.

• In its take-off phase of growth, India has underperformed relative to the other competitive East Asian countries. The Indian underperformance can be especially seen in the leather sector.

• Apparels and Leather sectors are labour intensive and offer tremendous opportunities for the creation of jobs for women in particular. The data show that the apparel sector is the most labour-intensive, followed by footwear. 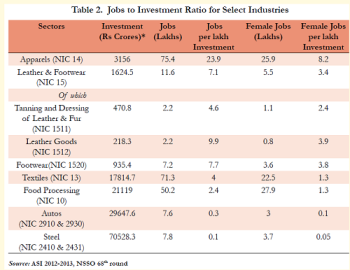 • Apparels and leather goods are many-fold more labour-intensive than autos and steel. The opportunity created for women implies that these sectors could be vehicles for social transformation.

• Women in apparel factories emphasise the agency they had gained on financial decisions. The agency also extended to husbands starting to helping with household chores.

• India has an opportunity to promote apparel, leather and footwear sectors because of rising wage levels in China that has resulted in China stabilising or losing market share in these products.

Indian apparel and leather firms are relocating to Bangladesh, Vietnam, Myanmar, and even Ethiopia. The window of opportunity is narrowing and India needs to act fast if it is to regain competitiveness and market share in these sectors.

B. Major Challenges faced by these manufacturing industries

India is handicapped relative to competitors in a number of ways:

• The costs and time involved in getting goods from factory to destination are greater than those for other countries because of a few very large capacity containers (VLCC) availability and exports have to be transshipped through Colombo which adds to travel costs.

• Labour regulations in India are mainly inspired by the colonial legacy of the British institutions.

• The problems with labour costs are well-known, such as regulations on minimum overtime pay, onerous mandatory contributions, lack of flexibility in part-time work and higher minimum wages in some cases.

• One symptom of labour market problems is that Indian apparel and leather firms are smaller compared to other countries firms. 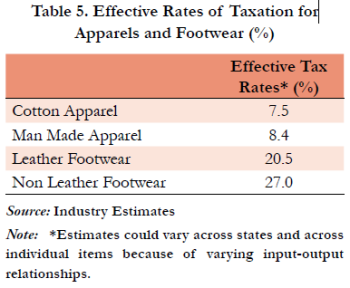 • The high tariffs on yarn and fibre increase the cost of producing clothing. India imposes a 10 percent tariff on man-made fibres and the domestic sales of clothing do not benefit from duty drawback and it also affects overall export competitiveness.

• This trend can be attributed to the limited availability of cattle for slaughter in India, thereby leading to the loss of a potential comparative advantage due to underutilization of the abundantly available natural resource.

Some measures of the package approved by the Government for textiles and apparels in June 2016 are:

• Apparel exporters will be provided relief to offset the impact of state taxes embedded in exports. This is really a drawback scheme that should be made WTO-consistent because it offsets taxes on exports.

• The textile and apparel firms will be provided with a subsidy for increasing employment. This will take the form of government contributing the employers’ 12 per cent contribution to the Employee Provident Fund (EPF).

• India needs to carefully weigh the benefits and costs of negotiating new Free Trade Agreements. Based on the recent analysis in 2016, it is estimated that an FTA with the EU and UK can lead to additional direct jobs in the apparel, leather and footwear sectors.

• The introduction of the Goods and Service Tax (GST) offers an excellent opportunity to rationalise domestic indirect taxes so that they do not discriminate.

• A number of labour law reforms would overcome obstacles to employment creation in these sectors like low wage employees do not have a 45 percent savings rate and therefore they may prefer to receive these contributions today than benefit from them tomorrow.

• Formal employment could increase by offering employees three choices when they start employment:

a. Decide whether they want 12 percent employee contribution to be deducted.

b. Decide whether their 12 per cent employer contribution goes to EPFO or National Pension Scheme (NPS).

c. Decide where their health insurance premiums go to according to the employee’s choice.