IIM Calcutta witnesses the highest admissions of the women candidates in its 2-year full time PGP Course. This year the institute has recorded 31 per cent of the total batch strength of female candidates which is the highest ever. 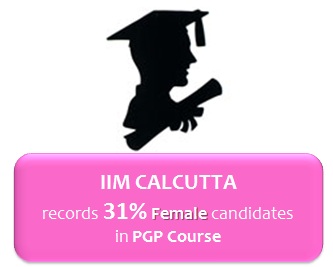 With this achievement the premier management institute has registered a two-fold rise over last year in the number of women admitted for the 2017-19 batch. Officials have mentioned that this is also the strongest girl squad among the top three IIMs - Ahmedabad, Bangalore and Calcutta - in recent times.

IIM -C has been able to get an average representation of 20%-22% for women in each batch over the past few years, but the one admitted in 2016 saw a sharp drop, falling to 16.4%, and this set the alarm ringing.

Faculty Speak on the News

On this news, IIM-C admission chairperson Pritam Basu has commented that "The girls performed incredibly well in the interview and got through on their own steam”. He also added that "This year girls were given two extra marks out of a total 50 marks (or 4%). This mark-up was part of a deliberate policy change to bring more gender diversity on the campus.”

Economics professor and former IIM-C dean Anindya Sen said "There has been no official mandate but the institute has always aimed at having a more diverse classroom".

Indian Institute of Management, Calcutta (IIM-C), is the first management institute to be accredited by AACSB, AMBA and EQUIS. This achievement has rendered IIM-C to become the first and only institute to be recognized by all the three credentials in India. IIM-C has joined the league of only 5 other management institutes in Asia and in total 73 business schools globally to currently possess all three accreditations.

The institute conducts two-year full time PGP course in Management which strives to produce best quality, skilled management professionals. The institute shortlists candidates for the programme via CAT Exam, which is conducted and organised by any one of the IIMs.

For more updates on latest MBA Programmes, register with jagranjosh.com and keep receiving the latest development in the top MBA institutes of India.

You can also visit MBA NEWS, section to stay updated with latest happenings in the field of management.