It is a well-known fact that India is an agriculture-based country, the population of which largely dependent on agricultural activity. An IAS aspirant must know about the various facts and actual scenario of the Indian agriculture sector.

Here, we have provided insights of the Indian agriculture sector and what makes it behind the major countries of the world involved in agriculture production. 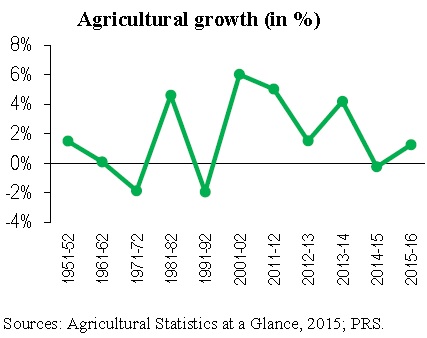 Indian agriculture sector has great potential to contribute to the large extent of its GDP but due to various factors, it remained as an activity for living only. There must be an initiative from the state to find out the key failure areas which posed as a hurdle for effective implementation of flagship programmes of Government for the growth of the agriculture in India.

After independence, various policies and initiatives were taken to improve the crippling condition of Indian agriculture but failed to achieve the desired goals. Indian agriculture is in immediate need of a collaborative approach of the Central government and the State government on a primary basis to meet the major deficiency and hurdles involved in the sector. The Government should also find out the alternatives of uneven weather conditions like drought, flood, hailstorm etc. in order to make survival for Indian Agriculture.