Practice the concept of Critical Reasoning at MBA section of Jagranjosh.com to prepare for the preparation for the Verbal Ability Section of MBA entrance exams like CAT, CMAT, MAT, XAT, IIFT, SNAP etc. 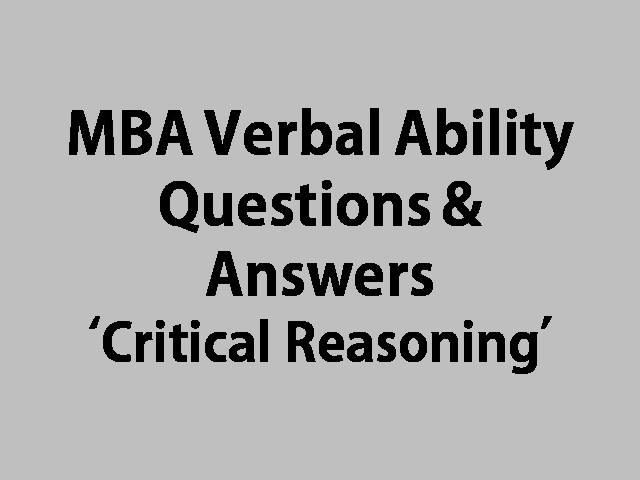 1. Religion appears to reduce the incidence of depression among those with medical problems. For instance, University of Michigan Professor of Sociology David Williams conducted a randomized survey of 720 adults suffering from leg and hip injuries in New Haven, Connecticut, in 1990. Those who attended religious services regularly were less depressed and less distressed by life events than those who did not. This finding held across age, race, socioeconomic status, educational attainment, and religious affiliation. Religious affiliation alone did not have these effects, but religious behavior did.
The writer of the above statement makes which of the following assumptions?

a) The number of incidences of depressions is getting reduced over the time.

b) People are becoming more religious day by day to become happy.

d) The socioeconomic status gets improved by following religious paths.

2. The introduction of e-clinical solutions to the global market was aimed at increasing the efficiency and cost effectiveness of the whole drug development process, in particular during the clinical phases. Through e-clinical solutions, clinical data can be efficiently and securely transferred among providers at a much lower cost.
The argument above rests on which of the following assumptions:

a) e-clinical solutions was launched to remove fallacies of clinical testing.

b) Clinical testing was becoming too expensive process.

c) e-clinical solutions is a lengthy but cost-effective procedure.

d) Economies of scale were achieved by the normal clinical testing.

3. The impact of 1991 Economic Reforms may be gauged from the fact that total foreign investment (including foreign direct investment, portfolio investment, and investment raised on international capital markets) in India grew from a minuscule US$132 million in 1991–92 to $5.3 billion in 1995–96.
Which of the following would strengthen the above argument?

a) India has always attracted foreign investment in the form of long-term bonds.

b) Economic Reforms were mainly introduced to bring privatization.

c) Before 1991 Economic Reforms, India was going through Fiscal Deficit.

d) The consequences of 1991 Economic Reforms were not as positive.

4. “There has been a high incidence of death in Rajasthan due to tobacco eating last year”. Hence, the Rajasthan’s Chief Minister suggested that tax rates on dangerous tobacco products like cigarette and gutka should not to be reduced as planned by the government.
Which of the following, if true, will most weaken the above argument?

a) Rajasthan Government is trying to reduce the sale of tobacco in the country.

b) Incidences of death due to tobacco eating were high last year as compared to previous year.

c) The adults and teenagers have easy access to tobacco products.

d) Rajasthan is the only state where the sale of tobacco products is the lowest.

5. In fiscal year ending June 2011, with a normal monsoon season, Indian agriculture accomplished an all-time record production of 85.9 million tonnes of wheat, a 6.4% increase from a year earlier.
Which of the following would strengthen the above argument?

a) India agriculture sector, at present, is prospering and achieving new records.

b) India normally faces deficit monsoon in rainy seasons also, which is the prime reason for distress in agriculture sector.

c) There is a constant growth in agriculture sector every year due to sufficient monsoon.

d) The growth rate is increasing every year in agriculture sector due to sufficient monsoon.

6. Since the 1960s, a smoker’s risk of developing lung cancer or COPD has actually increased compared with nonsmokers, even though the number of cigarettes consumed per smoker has decreased. There have also been changes in the type of lung cancer smokers develop – a decline in squamous cell carcinomas but a dramatic increase in adenocarcinomas. Both of these effects may be due to changes in the formulation of cigarettes.
Which of the following, if true, would most seriously weaken the conclusion above?

a) Smoking is the prime reason of causing the disease – adenocarcinomas.

b) Since 1960, the major cause of lung cancer is smoking.

c) The cases of lung cancer have increased due to eating tobacco as compared from smoking cigarettes.

d) The sale of the cigarettes in the country has increased considerably.

7. The youth require a mental faculty endowed with multi-dimensional intelligence. It is not adequate to foster cognitive intelligence alone — as is being done in India’s educational campuses today — but to also develop the other dimensions of intelligence: emotional, social, moral, spiritual, environmental, and innovational. India’s vast youth population is its demographic potential dividend, but only if equipped and enabled with this seven-dimensional intelligence.
The writer of the above statement makes which of the following assumptions?

a) India’s current education system is not currently equipped with the idea of seven-dimensional intelligence.

b) India’s current education system is an example of enabling seven-dimensional intelligence.

d) India’s youth is not potential to become multi-dimensional intelligent.

8. The fact of the matter is that there is a strong case for increasing the farm subsidies, at least indirectly. The Indian farm sector is now passing through a difficult period, as underscored by the suicides of farmers reported from states like Maharashtra and Andhra.
Which of the following would strengthen the above argument?

a) Increasing farm subsidies will put fiscal pressure on the government.

b) Increasing farm subsidies will reduce the incidences of farmer suicide.

c) Increasing farm subsidies is not the ultimate solution for reducing the incidences of farmer suicide.

d) Increasing farm subsidies will help the government to increase its revenue.

9. Drug addiction, like other habits such as smoking and drinking, almost always begins under peer pressure with teenagers being influenced by those of their high school and college colleagues who are only slightly older to join the “gang” and become adults, so to say. Even if in the initial stages, those youngsters who have been induced to start taking drugs do not find it pleasurable, they are unwilling to break away lest they offend seniors.
Which of the following, if true, will most weaken the above argument?

a) Some teenagers could not break away from the habit of drug addiction in fear of offending their seniors.

b) Habit of drug addiction begins under pressure.

c) Teenagers are influenced to choose drugs by slightly older people to make them join the gang.

10. A shade less than a third of India’s population now lives in urban areas, overcrowded cities and towns with infrastructure bursting at the seams. This problem will only worsen with little or no intervention happening. The proportion of the urban population can only go in one direction — upward — as more Indians migrate to the cities and towns in search of jobs. Cities are engines of growth, and as a result attract a lot of people. The country’s urban population contributes over 60 per cent of India’s GDP; in 15 years this will be 70 per cent.
The argument above rests on which of the following assumptions:

a) The rural population is growing at an increasing rate.

b) The urban population is growing at a decreasing rate.

c) The rural population is migrating to urban areas for job opportunities.

d) The urban population is migrating to rural areas for growth prospects.

In this section we will explain the rationale for choosing the answer pertaining to every question. After practicing these MCQ(s), you would be able to understand the concepts of Critical Reasoning.

Explanation (1): It can be assumed that the number of incidences of depressions is getting reduced over the time and religion can be a supporting factor to that.

Explanation (2): If e-clinical solution is a much efficient and cost-effective procedure, then previous clinical testing must be an expensive process.

Explanation (3): Third option definitely strengthens the above argument, as fiscal deficit can only be reduced by the inflow of more foreign investments.

Explanation (4): If the tobacco sale is the lowest in the state, then incidences of death in Rajasthan due to tobacco eating cannot be high.

Explanation (6): It can be deduced from the argument above that major reason for lung cancer is smoking and not tobacco eating.

Explanation (7): It can be assumed that the India’s current education system is not currently equipped with the idea of seven-dimensional intelligence.

Explanation (8): Option b) definitely strengthens the above argument, as Indian farm sector is going through a difficult phase resulting in farmer suicide. Hence, increasing farm subsidies will reduce the incidences of farmer suicide in India.

Explanation (9): It has been stated that teenagers begin the habit of drug addiction under pressure and they do not choose it willingly.

Explanation (10): It has been clearly mention in the paragraph that the proportion of the urban population can only go in one direction — upward — as more Indians migrate to the cities and towns in search of jobs.