Rail Budget has been merged with the General Budget from this year onwards. An IAS aspirant must know the motive of the government behind such move. This is one of the important for IAS Exam this year. Read here the detail regarding this issue. 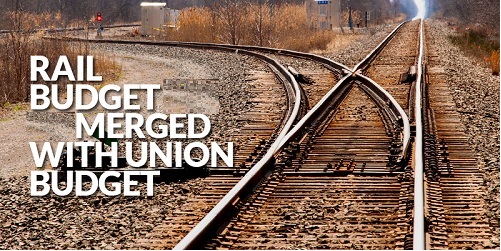 The 93 years old practice of presenting a separate Rail Budget has been abandoned from this year onwards and it has been merged with the General Budget. The Union Finance Minister has presented the Union Budget 2017 on 1st February 2017 and the Rail Budget was a part of the same budget.

Q. Do you think by merging Railway Budget with General Budget, still the Railways’ demand of grants will not become populist?

The salient features and benefits of merger

Argument against the Merger

At the time of our independence, the Indian Railways had 54,600 km of tracks, but we could add hardly 11,000 km in the last 60 years of the period. If we talk about China, they had just 22,161 km in 1950 while they have over 1 lakh km. Our high-speed trains like Shatabadis and Rajdhanis and even the latest Gatiman Express run at a maximum speed of 160 km per hour and we are feeling proud of having these trains. At the same time, China has already attained a speed of 300 km per hour with the Beijing-Guangzhou bullet train service. So, at this point in time, the Indian Railways need those initiatives on the part of the government, which makes Indian Railways self-reliant and more transparency in their finances and services.