NCERT solutions for class 7 Civics Chapter 1 - On Equality are available here in PDF for free download. Check these NCERT solutions to get the best explained answers that will help you score good marks in your exams.

NCERT Class 7 Social Science Civics Chapter 1 - On Equality are explained in the best and simplest manner to help you easily understand all the concepts. These NCERT solutions will help you get better in the subject and lay a foundation for performing well in your exams. We have provided here the NCERT solutions for the exercise questions given at the end of chapter 1 of the latest NCERT Book for Class 7 Civics. You can read all the answers from below or download them in PDF from the link provided in this article.

Check below the NCERT Solutions for Class 7 Civics Chapter 1 - On Equality:

1. In a democracy, why is a universal adult franchise important?

In a democracy, a universal adult franchise is important, as it is based on the idea of equality. It assures that all the every adult in a country has one vote irrespective of his/her socioeconomic backgrounds.

2. Re-read the box on Article 15 and state two ways in which the article address inequality?

(i) The State shall not discriminate against any citizen on grounds only of religion, race, caste, sex, place of birth or any of them.

(ii) No citizen shall, on grounds only of religion, race, caste, sex, place of birth or any of them, be subject to any disability, liability, restriction or condition with regard to:

(a) access to shops, public restaurants, hotels and places of public entertainment;

(b) the use of wells, tanks, bathing ghats, roads and places of public resort maintained wholly or partly out of State funds or dedicated to the use of the general public.

3. In what ways was Omprakash Valmiki’s experience similar to that of the Ansaris?

Omprakash Valmiki's experience was similar to the Ansaris in the following ways:

4. What do you understand by the term “all personnel are equal before the law”? Why do you think it is important in a democracy?

The term “all persons are equal before the law” states that all citizens are entitled to constitutional rights and freedom irrespective of their social or economic background. No person shall be discriminated against on the grounds of race, religion, caste or gender.

This is important in a democracy to preserve the true nature of a democratic society where everyone is given equal recognition and provided with equal opportunities.

5. The Government of India passed the Disabilities Act in 1995. This law states that persons with disabilities have equal rights and that the government should make possible their full participation. The government has to provide free education and integrate children with disabilities into mainstream schools. This law also states that all public spaces including buildings, school etc. should be accessible and provided with ramps.

Look at the photograph and think about the boy who is being carried with the stair. Do you think that the law stated above is being implemented in this regard? What needs to be done to make the building accessible? 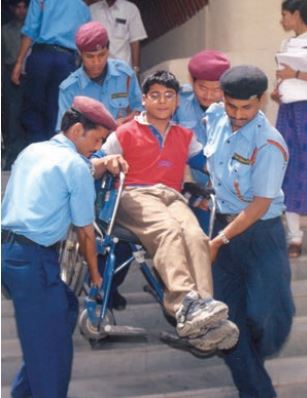 No, the law stated above is not being implemented in this regard as the disabled person is not able to access the public place. It is quite unsafe for him to be carried down by the security guards. It also affects his dignity because he has to depend on others for his movement.

To make the building accessible, the government should build a ramp along the stairs of the building.

Download all the NCERT Solutions for Class 7 Civics Chapter 1 from the following link: