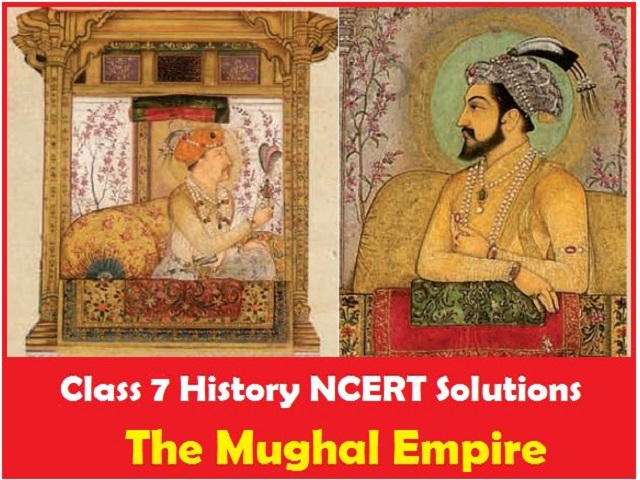 Check below the NCERT Solutions for Class 7 History Chapter 4 - The Mughal Empire:

(d) Abul Fazl, Akbar’s friend and counsellor, helped him frame the idea of ___________ so that he could govern a society composed of many religions, cultures and castes.

(a) The capital of Mirza Hakim, Akbar’s half-brother, was Kabul.

(b) The five Deccan Sultanates were Berar, Khandesh, Ahmadnagar, Bijapur and Golconda.

(c) If zat determined a mansabdar’s rank and salary, sawar indicated his cavalrymen.

(d) Abul Fazl, Akbar’s friend and counsellor, helped him frame the idea of sulh-i-kul so that he could govern a society composed of many religions, cultures and castes.

3. What were the central provinces under the control of the Mughals?

The central provinces under the control of the Mughals were Bengal, Bihar, Chittor, Deccan, Delhi, Gujarat, Kabul, Mewar, Marwar, Orissa and Sindh.

4. What was the relationship between the mansabdar and the jagir?

Mansabdars received their salaries as revenue assignments which werecalled jagirs. The Mansabdars were not allowed to reside in or administer their jagirs. They only had the rights to the revenue of their assignments, which was collected for them by their servants while the mansabdars themselves served in some other part of the country.

5. What was the role of the zamindar in Mughal administration?

The role of the zamindar in Mughal administration was to collect the revenues and taxes from the peasants. Thus, they acted as an intermediate between the Mughals and the peasants. In some areas, the zamindars exercised a great deal of power and were considered a part of the rural elite, like the village headman or the chieftains.

6. How were the debates with religious scholars important in the formation of Akbar’s ideas on governance?

Debates with religious scholars helped Akbar in framing the idea of sulh-i kul that means universal peace. Akbar was interested in the religion and social customs of different people. Akbar’s interaction with people of different faiths made him realise that religious scholars who emphasised ritual and dogma were often bigots. Their teachings created divisions and disharmony amongst his subjects. This led Akbar to the idea of sulh-i kul. This idea of tolerance did not discriminate between people of different religions in his realm. By using such a policy of tolerance Akbar was able to formulate governance guidelines which were based on a system of ethics – honesty, justice and peace.

7. Why did the Mughals emphasise their Timurid and not their Mongol descent?

From their mother’s side, the Mughals were descendants of Genghis Khan, the ruler of Mongol. From their father’s side, they were the successors of Timur the ruler of Iran, Iraq and modern-day Turkey. However, the Mughals did not like to be called Mughal or Mongol because Genghis Khan’s memory was associated with the massacre of a large number of people. But the Mughals were proud of their Timurid ancestry because their great ancestor, Timur had captured Delhi in 1398.

8. How important was the income from land revenue to the stability of the Mughal Empire?

9. Why was it important for the Mughals to recruit mansabdars from diverse backgrounds and not just Turanis and Iranis?

The Mughals emphasised on recruiting mansabdars from diverse backgrounds and not just Turanis and Iranis because:

Download all the NCERT Solutions for Class 7 History Chapter 4 from the following link: