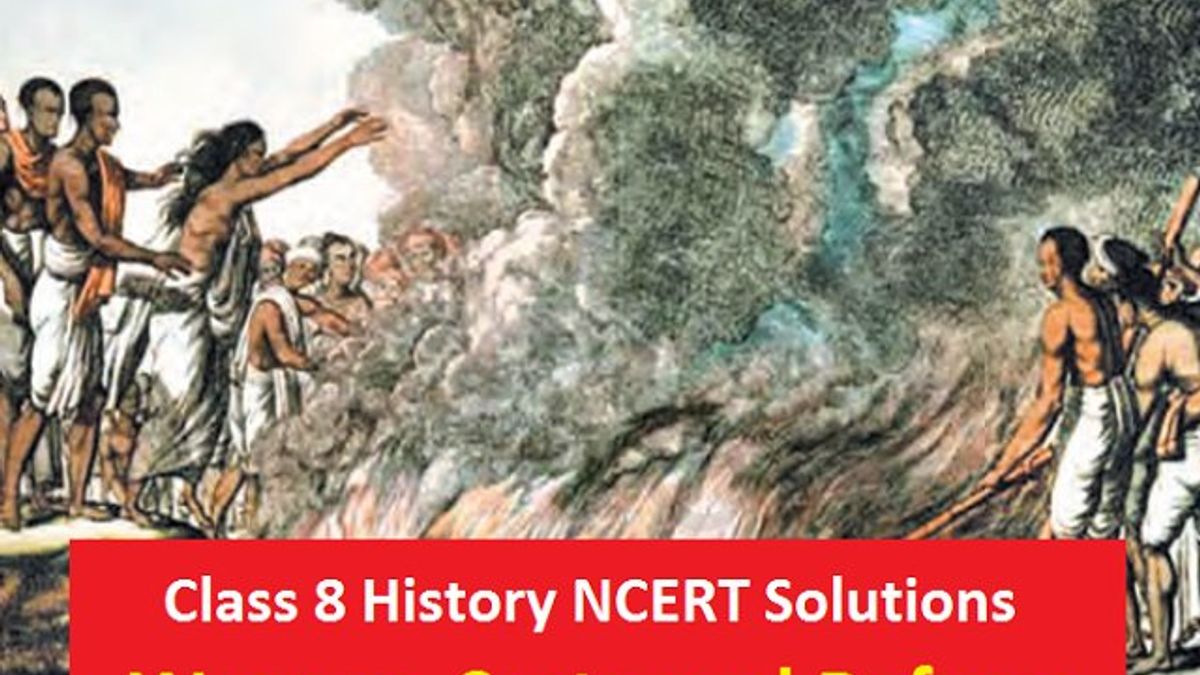 NCERT Solutions for Class 8 Social Science History Chapter 8 - Women, Caste and Reform are provided here to help you in easy and active learning of the concepts. We have provided here the best and the simplest answers to all the questions given in chapter 8 of the latest NCERT History Book for Class 8. All the answers are provided here in a readable and downloadable format.

What social ideas did the following people support?

(a) Rammohun Roy suported the ban of practice of sati.

(a) When the British captured Bengal they framed many new laws to regulate the rules regarding marriage, adoption, the inheritance of property, etc.

(b) Social reformers had to discard the ancient texts in order to argue for reform in social practices.

(c) Reformers got full support from all sections of the people of the country.

(d) The Child Marriage Restraint Act was passed in1829.

(b) False, In fact the Social reformers used the ancient texts to justify their point of view.

(c) False, Reformers were opposed by the orthodox Hindus and Muslims.

(d) False, The Child Marriage Restraint Act was passed in1929.

3. How did the knowledge of ancient texts help the reformers promote new laws?

The reformers used the ancient texts to convince people about the need for abolishing certain social evils like widow burning, caste distinctions, child marriage, etc. They believed that if they take the help of the ancient religious texts to support their ideas, it will surely put an impact on people's minds. Thus they used quotation from ancient texts to give weight to their arguments.

4. What were the different reasons people had for not sending girls to school?

Different reasons people had for not sending girls to school were as follows:

5. Why were Christian missionaries attacked by many people in the country? Would some people have supported them too? If so, for what reasons?

Christian missionaries had set up schools for the schools for tribal groups and lower caste children. Caste based discrimination was not followed in the schools run by these missionaries. Children studying in these schools were equipped with some resources to make their way into a changing world. Soon the poor left the villages and started looking for jobs in the cities. However, the larger section of the people who looked down on the lower caste did not like the progress of these tribal people. Hence, they were attacked by mainly the orthodox or conservative people in the country.

Social reformers would have supported the Christian missionaries for their work against social evils.

6. In the British period, what new opportunities opened up for people who came from castes that were regarded as “low”?

Following new opportunities opened up for people who came from castes that were regarded as low:

7. How did Jyotirao, the reformer justify his criticism of caste inequality in society?

Jyotirao Phule developed his own ideas about the injustices of caste society. He attacked the Brahmans’ claim that they were superior to others, since they were Aryans. He argued that the Aryans were foreigners who defeated and subjugated the true children of the country who had lived here from before the coming of the Aryans. He said that the upper caste had no right to their land and power. The land belonged to the low caste people who were the original inhabitants of the land.

8. Why did Phule dedicate his book Gulamgiri to the American movement to free slaves?

The Civil Rights Movement in America helped in ending slavery and racial discrimination in the country. Jyotirao Phule dedicated his book ‘Gulamgiri’ that means slavery, to the American movement to free slaves as he found similarities between the condition of lower castes in India and the condition of black slaves in America.

9. What did Ambedkar want to achieve through the temple entry movement?

10. Why were Jyoti Rao Phule and Ramaswamy Naicker critical of the national movement? Did their criticism help the national struggle in any way?

Jyoti Rao Phule and Ramaswamy Naicker both were critical of the national movement because they thought that there were no differences between anti-colonialists and the colonialists. Both, according to them, were outsiders and had used power for subjugating and oppressing the indigenous people.

Phule thought that the upper-caste people were involved in the nationalist movement against the British so that they could again use their power and oppress the people belonging to lower castes, once the Britishers would leave. Phule was always against the upper caste people as he called them the outsiders.

Ramaswamy Naicker was a part of Congress party and his experiences led him to realise that the party was not free from the evil of casteism.  When a feast was organised by the nationalists within the party, different seating arrangements were made for the people of upper and lower castes. This made Naicker believe that the lower castes have to fight their own battle.

Their criticism helped in shaping the opinion of nationalist leaders. Reformists started restructuring their thoughts to get rid of the caste inequalities. Thus, the national struggle became the tool to eradicate the differences related to castes, religions and gender.

Download all the NCERT Solutions for Class 8 History Chapter 8 from the following link: