SSC is well known for the recruitment of Group ‘B’ and ‘C’ posts under the Ministries/Departments in The Government of India. SSC organizes various examinations like Combined Graduate Level examination, Combine Higher Secondary Level, Stenographer and for SI/DP/CAPF, etc.

SSC is well known for the recruitment of Group ‘B’ and ‘C’ posts under the Ministries/Departments in The Government of India. SSC organizes various examinations like Combined Graduate Level examination, Combine Higher Secondary Level, Stenographer and for SI/DP/CAPF, etc., throughout the year having almost the same Exam Pattern. The Exam paper is comprised of basically 4 subjects.

So, Jagranjosh.com has introduced a brief plan for revising topics at the time of examination. In this article, Blood Realtions which sometimes appear more difficult to understand in terms of  Human Relationship.

The entire questions in this section are completely based on Blood Relationship. The candidate should have a sound knowledge of Blood Relation in order to solve these questions.

Blood Relations can be divided into two sides as follows:

Knowledge of some important relations:

The easiest way to solve the problems based on Blood Relationships would be to draw a tree diagram as follows. 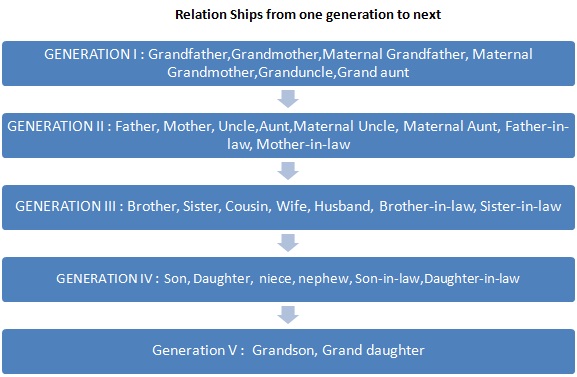 Example1: P’s father’s Sister’s father is Q. How is Q related to P?

Example2: Examine the following relationship among members of a family of six persons - A, B, C, D, E and F.

Which one of the following inferences can be drawn from the above?

(c) D is the granddaughter of F

Solution: (b) it is clear that there are three males and three females in the family. Clearly A, E and B are males. So, C, D, and F are females. Also given that D is the mother of one boy and one girl. So, A and D form a couple having two children, namely B and C. Hence A is the husband of D.