In this article, we have prepared a series of 20 questions based on Blood Relations ranging from the easiest to the toughest one. There are almost 1-2 questions that were asked in SSC CHSL and CGL exam. 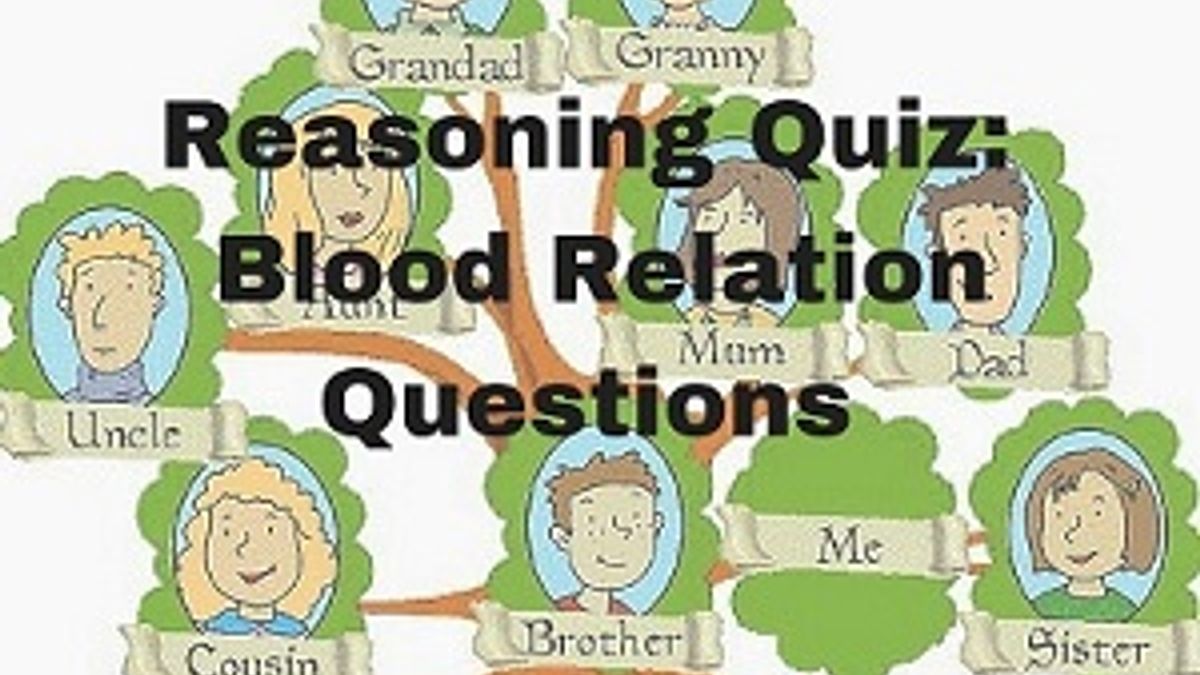 In this article, we have prepared a series of 20 questions based on Blood Relations ranging from the easiest to the toughest one. There are almost 1-2 questions that were asked in SSC CHSL and CGL exam. These questions are a little bit tricky and time-consuming if you do not know how to solve them. Now, you may be confusing about the shortcuts. We would like to tell you that there is no such things. You should solve them with graphical representation. Simplify the problem  in Graph-tree representation.

Example: - Pointing to a photograph of a boy Suresh said, "He is the son of the only son of my mother." How is Suresh related to that boy? 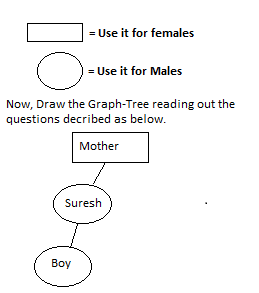 Hence, Suresh is the father of that boy.

Q1. Sita and Vaibhavi are sisters. Ravi and Girdhar are brothers. Sita's daughter is Ravi's sister. What is Vaibhavi's relation to Girdhar ?

Q2. It is given that Shalini is the mother of Sunil, Arjun is the son of Shalini, Karan is the brother of Pallavi, Pallavi is the daughter of Sunil, Who is the grandmother of Karan?

Q3. Ayushi is the niece of Ankit. Ankit's mother is Lakshmi. Kavya's husband is Gaurav. Parvathi is the mother-in-law of Gaurav. How is Ayushi related to Gaurav ?

Q4. Arun is Bishwajeet's brother. Chaman is Arun's father. Deepika is Chaman's sister and Ekta is Deepika's Mother. How is Bishwajeet related to Ekta ?

Q5. Amit is the father of Chaitali and Deepak is the son of Binod. Eklavya is the brother of Amit. If Chaitali is the sister of Deepak. How is related to Eklavya?

Q6. Pointing to a photograph, Mayuri said, "Her father's only son's wife is my mother-in-law". How is Mayuri's husband related to that lady in the photo?

Q8. Among her children, Radha's favourites are Ravi and Rani. Rani is the mother of Abhinav, Who is loved most by his uncle Arav. The head of the family is Ravi lal, who is succeeded by his son Govind and Mahesh. Govind and Radha have been married for 35 years and have 3 children. What is the relation between Arav and Mahesh ?

Q9. Vinit introduces Varun as the son of the only brother of his father's wife. How is Vinit related to Varun ?

Q11. Prerna has a son, named Arun. Ramesh is Prerna's brother. Neetu too has a daughter named Neema. Neetu is Ramesh's sister. What is Arun's relationship to Neema?

Q12. Ajay is Binny's daughter. Binny is Chirag's mother. Dinesh is Chirag's brother. How is Dinesh related to Ajay?

Q13. Ankita and Babita are sisters. Ankita is mother of Dilip. Babita has a daughter Chanchal who is married to Tarun. Gaurav is the husband of Ankita. How is Chanchal related to Dilip?

Q14. Abhishek's father has a son Rohit who has an aunt Sangeeta who has a husband, Girish whose father-in-law is Mohan. What is the relation of Mohan to Abhishek?

Q15. Arvind and Binoy are brothers. Ekta is the daughter of Ramaya. Ramaya is the wife of Binoy. What is the relation of Ekta to Arvind?

Q17. Introducing a man, a woman said, "His wife is the only daughter of my mother." How is the woman related with the man?

Q20. P said pointing to Q that his father is my father's only son". How is P related to Q?