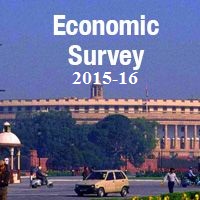 Budget forms the basic focal path of the Government for the coming year, Budget decides the focus of the government and it also provides the information on the achievement of the previous years. It is more a Socio- Economic-Political document.

A year ago, the Economic Survey spoke about the “sweet spot” for the Indian economy, arising from a combination of a strong political mandate and a favourable external environment. At the same time, it cautioned against unrealistic expectations of “Big Bang” reforms because of the dispersed nature of  power in India and the absence of that impelling driver—crisis.

If the world economy lurches into crisis or slides into further weakness, India’s growth will be seriously affected, for the correlation between global and Indian growth has been growing dramatically. Assessments of India’s performance over the coming year will therefore need to be conditional. This is not an advance apology for likely future performance but the sobering reality of India becoming “so entwined” with the world.

The Chakravyuha Challenge of the Indian Economy

India has made great strides in removing the barriers to the entry of firms, talent, and technology into the Indian economy. Less progress has been made in relation to exit. Thus, over the course of six decades, the Indian economy moved from ‘socialism with limited entry to “marketism” without exit’. Impeded exit has substantial fiscal, economic, and political costs. We document its pervasive nature which encompasses not just the public sector and manufacturing but the private sector and agriculture.

A number of solutions to facilitate exit are possible. The government’s initiatives including the new bankruptcy law, rehabilitation of stalled projects, proposed changes to the Prevention of Corruption Act as well as the broader JAM agenda hold the promise of facilitating exit, and providing a significant boost to long-run efficiency and growth.

Large-scale, technology-enabled, real-time Direct Benefit Transfers can improve the economic lives of India’s poor, and the JAM Trinity—Jan Dhan, Aadhaar, Mobile—can help government implement them. Over the past year JAM has thickened and spread: Jan Dhan and Aadhaar deepened their coverage at an astonishing rate—respectively creating 2 and 4 million accounts per week—and several mobile money operators were licensed. This chapter examines the first variety of JAM—the PAHAL scheme of transferring LPG subsidies via DBT. The scheme reduced leakages by 24 per cent and seems to have excluded few genuine beneficiaries.

When deciding where next to spread JAM, policymakers should consider first-mile (beneficiary identification), middle-mile (distributor opposition) and last-mile (beneficiary financial inclusion) challenges. Our JAM preparedness index suggests that the main constraint on JAM’s spread is the last-mile challenge of getting money from banks into people’s hands, especially in rural areas. The government should improve financial inclusion by developing banking correspondent and mobile money networks, while in the interim considering models like BAPU—Biometrically Authenticated Physical Uptake.

At present, the most promising targets for JAM are fertiliser subsidies and within government fund transfers—areas under significant central government control and with substantial potential for fiscal savings.

Indian agriculture, is in a way, a victim of its own past success—especially the green revolution. It has become cereal-centric and as a result, regionally-biased and input-intensive (land, water, and fertiliser). Rapid industrialization and climate change are raising the scarcity value of land and water, respectively. Evolving dietary patterns are favoring greater protein consumption.

To adapt to these changes, agriculture requires a new paradigm with the following components: increasing productivity by getting “more from less” especially in relation to water via micro irrigation; prioritizing the cultivation of less water-intensive crops, especially pulses and oil-seeds, supported by a favorable Minimum Support Price (MSP) regime that incorporates the full social benefits of producing such crops and backed by a strengthened procurement system; and re-invigorating agricultural research and extension in these crops. Finally, we provide evidence of deep segmentation in Indian agricultural markets which, if remedied, would create one Indian agricultural market and boost farmers’ incomes.

Imagine the government were an investor trying to maximise India's long-run economic growth. Given fiscal and capacity constraints, where would it invest? This chapter shows that relatively low-cost maternal and early-life health and nutrition programs offer very high returns on investment because: (i) the most rapid period of physical and cognitive development occurs in the womb, so in utero and early-life health conditions significantly affect outcomes in adulthood; and (ii) the success of subsequent interventions—schooling and training—are influenced by early-life development.

Despite recent progress, India generally under-performs on maternal and child health indicators: pre-pregnancy weights and weight-gain during pregnancy are both low. India is already halfway through its demographic dividend, and taking full advantage requires a healthy and educated population.

Making these investments in maternal nutrition and sanitation, and enhancing their effectiveness by working to change social norms, can help India exploit this window.

Bounties for the Well-Off

Subsidies for the poor tends to attract policy attention. But a number of policies provide benefits to the well-off. We estimate these benefits for the small savings schemes and the tax/subsidy policies on cooking gas, railways, power, aviation turbine fuel, gold and kerosene, making assumptions about the definition of “well-off” and the nature of neutral policies.

We find that together these schemes and policies provide a bounty to the well-off of about Rs 1 lakh crore. We highlight that policies that are based on providing tax incentives will, in India, benefit not the middle class but those at the very top end of the income distribution. For example, the average income of those in the 20 percent tax bracket places them roughly in the 98.4th percentile of the Indian income distribution, and the corresponding figure for the 30 percent tax bracket is the 99.5th percentile.

Fiscal capacity—spending and especially taxation—is key to long run economic development. Taxation is not just about financing spending, it is the economic glue that binds citizens to the state in a two-way accountability relationship. Against this background, we assess India’s fiscal capacity. Simple tax-GDP and spending-GDP ratios suggest that India under-taxes and under-spends relative to comparable countries.

But, controlling for the level of economic development, India neither under-taxes nor under-spends. India does tax and spend less than other politically developed nations, but given that most other democracies took time to strengthen tax capacity, perhaps India is not an outlier on this dimension, either. India does stand out in the number of individual income taxpayers, currently about 4 percent, far from our desirable estimate of about 23 percent. Building long-run fiscal capacity is vital. One low hanging fruit would be to refrain from raising exemption thresholds for the personal income tax, allowing natural growth in income to increase the number of taxpayers. Beyond that, building fiscal capacity is also about creating legitimacy in the state. This can be acquired by prioritizing improved delivery of essential services that all citizens consume.

While remaining committed to multilateralism, India like many other countries, has negotiated a series of free trade agreements (FTAs), notably with trading partners in Asia. Since the mid-2000s, India’s FTAs have doubled to about 42 today. At a time of seismic changes in the international landscape in the form of mega-regional agreements, involving the largest traders—USA, Japan, and the European Union—we review the experience of a few of India’s FTAs. Using updated data and methodologies, we find that the economic impact is what might be expected. FTAs have led to increased imports and exports, although the former has been greater.

We find that the average effect of an FTA is to increase overall trade by about 50 percent over roughly four years. We also find that the ASEAN FTA has had the greatest impact, possibly because tariff reduction by India has been greater under it. The results also suggest a bigger impact on metals on the importing side and textiles on the exporting side. More work is required to enrich this analysis and to extend it to services so that a definitive assessment can be made of the overall impact of India’s FTAs.

Recent reforms in the fertiliser sector, including neem-coating to prevent diversion of urea to industrial uses, and gas-pooling to induce efficiency in production, are steps in the right direction. Fertiliser accounts for large fiscal subsidies (about 0.73 lakh crore or 0.5 percent of GDP), the second-highest after food. We estimate that of this only 17,500 crores or 35 per cent of total fertiliser subsides reaches small farmers.

The urea sector is highly regulated which: creates a black market that burdens small farmers disproportionately; incentivises production inefficiency; and leads to over-use, depleting soil quality and damaging human health. Reforms to increase domestic availability via less restrictive imports (“decanalisation”) and to provide benefits directly to farmers using JAM will address many of these problems.

To exploit its demographic dividend, India must create millions of “good”— safe, productive, well-paying—jobs. These tend to be in the formal sector. This chapter studies constraints on formalisation and reviews a number of ongoing developments which are responding to these challenges. First, the increasing use of contract labour supplied by specialised staffing companies, which allows large firms to grow, raising aggregate productivity. Second, the dynamic of competitive federalism is at work, with states competing to attract employment-intensive, high-quality companies. But what a company manufactures matters not only because it affects employment and growth today, but because it shapes the set of products a country can produce in the future.

Some products, like cellphones, can help India produce other high-tech products and climb technology ladders, leading to faster medium-term growth. The third trend involves labour-intensive manufacturing—like apparel—firms relocating to smaller cities. This business model has both commercial and social advantages. Firms benefit from lower costs, and also create “suitable” jobs for women which can otherwise be rare in towns which have rapidly urbanised. The centre could complement these developments and boost formal sector job growth by expanding employees’ choice regarding their employment benefits.

Since 2014, sweeping changes have characterized the power sector, including: record addition to generation capacity and the comprehensive initiative─Ujwal DISCOM Assurance Yojana (UDAY)─to improve the health and performance of the distribution companies. These changes provide the basis for discussing issues of longer-term interest for the states and their power regulators. These include reducing the complexity of tariff schedules that may prevent consumers from fully responding to price signals, the impact of quality-adjusted tariffs on the competitiveness of Indian industry, and the impediments to creating one market for power.

Finally, using insights from the optimal income taxation literature, we provide illustrative estimates of the structure of consumer tariffs. The results suggest the possibility of achieving reasonably greater progressivity in tariff structures, with lower tariffs for the poor, while also ensuring cost recovery.