IAS Vandana Singh Chauhan is an inspiration to millions of village girls from Hindi medium who dream to become a UPSC topper someday. Check her UPSC success journey below.

Vandana Singh Chauhan belongs to a very humble background. Her family resided in a small village of Haryana named Nasrullagarh where Vandana was born and brought up. Vandana had a joint family and they had orthodox views when it came to the education of girls. This is the reason, they did not favour her receiving education as well. However, Vandana's father, Mahipal Singh Chauhan sent her to Kanya Gurukul near Moradabad to complete her education, breaking a dozen norms of the village. This gesture of her father motivated Vandana to work harder and harbour the dream to become an IAS officer one day.

After completing her 12th standard, Vandana Singh Chauhan enrolled for LLB in BR Ambedkar University, Agra. Since her family was not very supportive, she did not go to college but stayed at home during her graduation years. Vandana used to order her Law books online or sent her brother to get them for her in those days. However, she did not quit her studies. She graduated with flying colours.

After her graduation, Vandana began studying for UPSC Civil Services. She could not go to any other city to join any coaching institute as her family’s financial condition did not support this idea, so she began her preparation at home itself.

She devoted 12-14 hours every day to studying for CSE. Her disciplined lifestyle from Gurukul helped her sit for such long hours. No one from her family, except her brother, helped her in the preparation for this exam. Her hard work paid off within a year. Vandana succeeded in her first attempt at UPSC CSE in 2012 and secured All India Rank 8th that year. Her fame spread all over the country and suddenly she became a motivation to millions of village girls who could not study in English medium schools.

Vandana Singh Chauhan said in an interview once that she made the mistake of ignoring negative marking in CSE Prelims but somehow crossed the cut-off that time. She urged the candidates to not only study for the UPSC Mains all year round but also prepare for Prelims by solving as many sample papers as they can at least 6 months before the exam. 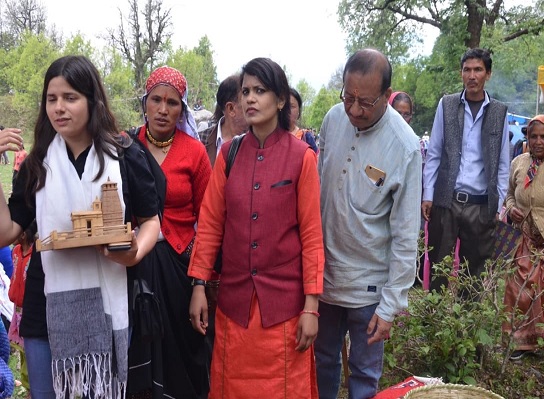 Vandana Chauhan is currently posted as the DM of Almora district in Uttarakhand. Last year on the occasion of her joining as the DM, she was given the guard of honour at the collectorate. She is known for her quick decision-making, no delay policy and is one of the most dynamic officers our country has ever seen.

UPSC IAS 2022: Failure In School Does Not Stop You From Becoming A UPSC Topper: IAS Rukmani Riar's Success Story