Why does the sky appear red at the time of sun set and sun rise?

In this article you will come to know the reason behind the red colur of sky at the time of sun set and sun rise.

Q. Why does the sky appear red at the time of sun set and sun rise? 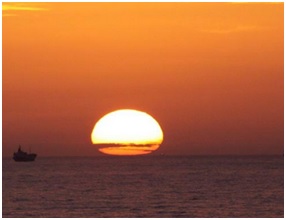 Ans. Sunlight, consisting of different colours having different wavelengths, when passes through the atmosphere, gets scattered by the tiny air particles. The blue colour of the sunlight having the shortest wavelength is scattered the most by tiny particles than other colours like yellow, orange, and red, having longer wavelengths. Thus, when we look towards the sky, some of this scattered blue light enters our eyes, making the sky appear as blue in colour. But at the time of sunrise or sunset, the light rays have to travel a longer distance through atmosphere due to which most of the blue light gets scattered away before reaching our eyes and the red light having longer wavelength remains unaffected and passes through the atmosphere to reach our eyes hence making the sky appear red.