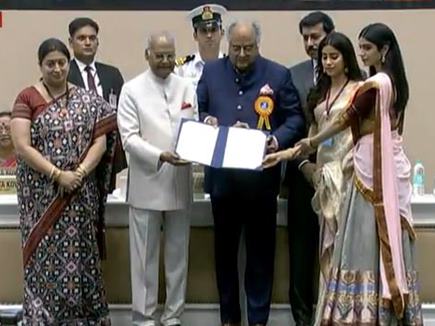 The awardees were informed at the last minute that the President will present only 11 awards. Over 60 awardees signed a letter of protest addressed to the Directorate of Film Festivals, expressing their disappointment at the way the announcement was made.

In the history of the awards, it was for the first time that the President attended only the second half of the ceremony, honouring only a few of the winners. For 64 years, the President has been handing over the National Film Awards to all the recipients.

When were the awards announced?

The 65th National Film Awards were announced on April 13, 2017 by the jury headed by renowned filmmaker Shekhar Kapur.

• Sridevi was posthumously awarded with the Best Actress award for her movie ‘Mom’ and the Dada Saheb Phalke Award went to late veteran actor Vinod Khanna, who died on April 2, 2017.