In February 2019, Chandela shot a world record score of 252.9 to clinch gold at the International Shooting Sport Federation World Cup in New Delhi. 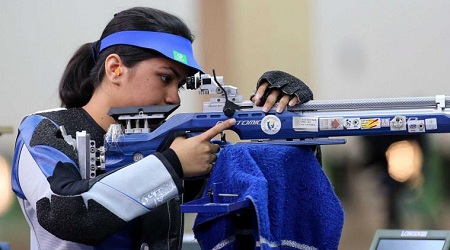 India’s Apurvi Chandela on May 1, 2019 became world number 1 in women’s 10m air rifle event, according to the latest rankings released by the International Shooting Sport Federation.

Hailing from Jaipur, the shooting ace is among the five Indian shooters to have already secured 2020 Olympics quotas for the country. The shooter took to twitter to share her joy on achieving the feat. “World Number 1 touched a milestone in my shooting career,” wrote Chandela.

• In 2012, Chandela won the gold medal in the 10 metres air rifle event at the National shooting championships in New Delhi.

• In 2014, she won four medals at the Intershoot Championships at The Hague, that included two individual and two team medals.

• In the same year, she won a gold in the Glasgow Commonwealth Games, having scored 206.7 points in final, creating a new games record.

• Though Chandela qualified for the 2016 Rio Olympics in the women's 10m air rifle event, where she finished at 34th position in the qualification round out of 51 contestants.

• While the 26-year-old Chandela has already booked a Tokyo Olympics berth, she narrowly missed out on a medal, finishing fourth with a total score of 207.8, at the recently-concluded ISSF World Cup in Beijing.

Hockey India on May 1, 2019 nominated ace Indian goalkeeper PR Sreejesh for the prestigious Rajiv Gandhi Khel Ratna Award and three other players for the Arjuna Award.

• The former captain made his national team debut in 2006. He has over 200 caps for the team and was honoured with the Arjuna Award in 2015.

• He was conferred with the Padma Shri, fourth highest civilian award, in 2017.

• If he wins the Khel Ratna award, Sreejesh will become only the third sportsperson from Kerala to receive the prestigious award.

• He will also be the third hockey player to clinch the award.