Remembering Chandra Shekhar Azad, Prime Minister Narendra Modi tweeted, “My humble tribute to Bharat Mata Ke Veer Sapoot Chandrasekhar Azad on his birth anniversary. He was a bold and determined revolutionary, who sacrificed his life for the country's freedom. His heroic legacy is a source of inspiration for the people of India.” 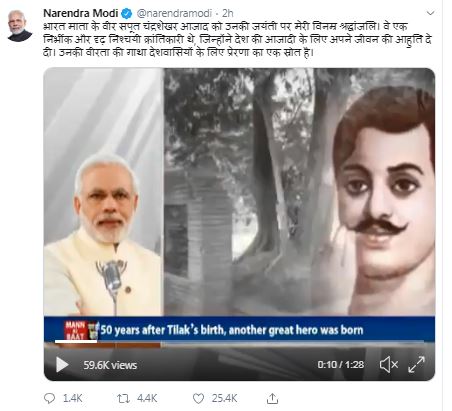 Here are some must know facts about the life of Chandra Shekhar Azad:

•    He was born as Chandra Shekhar Tiwari on July 23, 1906 in Bhambri village, Alirajpur district, now in Madhya Pradesh. Chandra Shekhar was just 15 years old when caught by British policemen and sentenced to 15 whiplashes.
•    He became extremely popular after Kakori Rail Dacoity in 1925 and assassination of policeman John Saunders in year 1928.
•    Chandra Shekhar joined Mahatma Gandhi’s non-cooperation movement at very early age when he was a school student.
•    Bhagat Singh and Azad came together after the death of Lala Lajpat Rai. Azad trained Bhagat Singh and other young revolutionaries in underground activities.
•    Azad died at Alfred Park in Allahabad, now Prayagraj, on 27 February 1931. The park has been renamed to Chandrashekhar Azad Park to honour the incredible sacrifice of this legend.
•    Police had surrounded him in the park after Virbhadra Tiwari (their old companion who later turned traitor) informed them of his presence there.
•    Azad was wounded in the process of defending himself and Sukhdev Raj and killed three policemen and wounded others.
•    After a long shootout, he succumbed to the injuries, his postmortem reports revealed. The Colt pistol of Chandra Shekhar Azad is displayed at the Prayagraj Museum.

What was Kakori Dacoit?

On August 9, 1925, Hindustan Socialist Republican Army (HSRA) attacked a train carrying a collection of government funds in Kakori, in which Rs 4,500 was looted by Indian freedom fighters. Members of HSRA were Ramprasad Bismil, Ashfaqallah Khan, Rajendra Lahiri and Roshan Singh were arrested and sentenced to death. Azad managed to dodge the police.