As soon Dutee Chand won 100m gold at world university games, President of India, Prime Minister and celebrities of bollywood took to twitter to congratulate her.

Dutee Chand has created a history by winning first position in 100 meter race at the Universiade, the World University Games in Naples. She has become first Indian sprinter to win 100m Gold in this race. Dutee Chand clocked 11.32 seconds to win this gold.

Dutee Chand was running in the fourth lane but reached at the finish mark ahead of all eight athletes. She got a maximum challenge from Del Ponte of Switzerland who finished her race in 11.33 seconds. However, for third position athlete of Germany took 11.30 seconds to win bronze medal.

President Kovid congratulated her for winning 100m gold in world university games in a tweet. He said that Dutee Chand's victory is India's first such gold and moment of immense pride for our country. 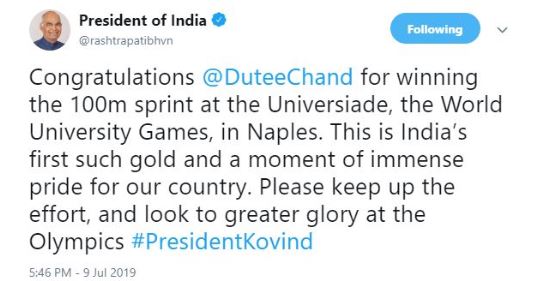 She replied to the President with a

Arjun Kapoor writes on twitter, "Congratulations @DuteeChand on becoming the first Indian woman to win the 100-metre sprint at the 30th Summer University Games in Italy!"