Economic Survey 2020 Highlights: The Chief Economic Advisor (CEA) Krishnamurthy V Subramanian tabled the Economic Survey 2019-20 in the Parliament on January 31, 2019, just a day before the presentation of Union Budget 2020-21. Finance Minister Nirmala Sitharaman will be presenting the Budget 2020 on February 1, 2020 to make the public aware of the government finances and estimated revenue and expenditure for 2020-21. The Economic Survey, on the other hand, talks about the overall economic progress made in the previous fiscal year and the challenges faced to achieve the targetted GDP Growth. Get here the detailed analysis of the Economic Survey along with the highlights and brief summary.

The Survey 2020 focuses on the theme of integrating old with new through Trust in the economy; promoting pro-business policies and creating wealth and job opportunities. The Survey projects India's GDP growth at 6-6.5 percent in 2020-21. The Survey 2020 throws light on new ideas to boost growth and accelerate wealth creation. These are – Thalinomics, Adoption of China model, Trust and others. This annual document of the Union Finance Ministry focuses on the implementation of various Government Schemes and policies and their impact on the economy so far. Besides talking about the macroeconomic and microeconomic factors, GDP growth rate, Inflation, the Economic Survey 2019-2020 throws a light upon the major impact of employment, agricultural policies and climate change on the Indian Economy.

Key Highlights of the Economic Budget 2020 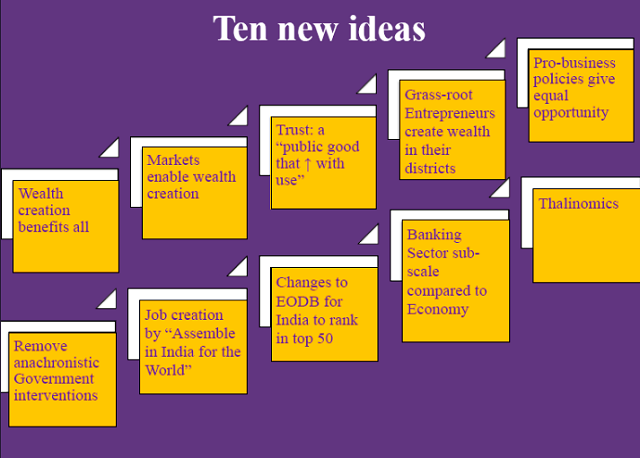 - India witnessed a GDP growth of 4.8% in the first half of 2019-20 amidst weakened global trade and demand

- Growth of Agriculture and allied activities & Public administration, defence, and other services’ was higher in the first half of 2019-20 in comparison to second half 2018-19. 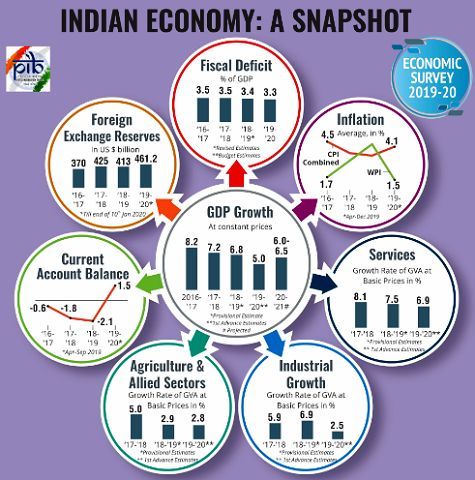 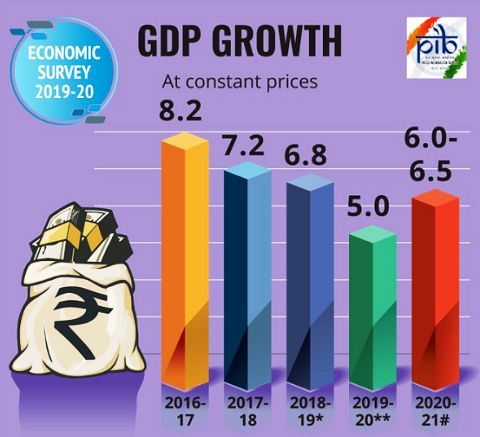 The Economic Survey talks about the need to bring openness in the market for the creation of wealth through increased investment. In light of this, the survey points towards an Invisible Hand that is supported by the Hand of Trust. It presents an amalgamation of old and new; old in terms of ancient Indian tradition and new suggests the use of FinTech in Indian Public Sector Banks. It calls for strengthening this invisible hand through:

- Introduction of the idea of trust as a public good 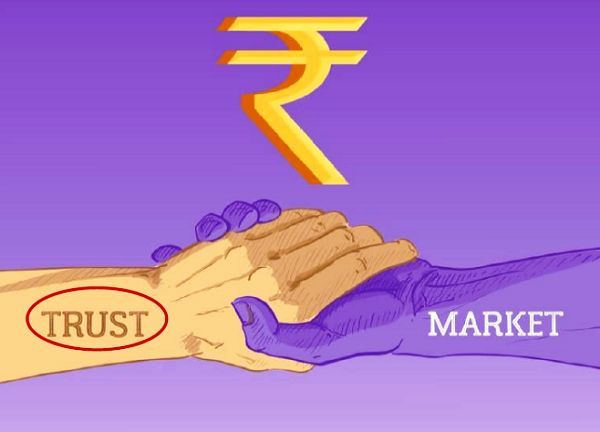 The Survey calls for the creation of wealth through:

- Entrepreneurship of the working class

- Pro-business policies to test the power of competitive markets

- Elimination of policies that weaken the markets

- Integration of Assemble in India into Make in India

The Survey suggests restricted government intervention in the markets. It lists out several instances where the intervention of Government has adversely affected the market such as imposing stock limits under Essential Commodities Act (ECA), 1955 that led to increase in onion prices in 2019; regulation of drug prices under ECA; intervention in the food grain market and so on. The government must analyse and then decide whether its intervention is even required in a particular market. This will directly benefit by encouraging investments and economic growth.

Creation of Jobs and Growth

The Economic Survey calls for the integration of “Assemble in India” with “Make in India” to create more jobs and accelerate growth. The survey seeks to:

This can be achieved by adopting China-like policies such as export of goods majorly to rich markets.

India was ranked at 63rd position in World Bank’s Doing Business 2019 rankings, a jump of 79 positions from 142nd rank in 2014. However, the economy is still trailing in several parameters such as Ease of Starting Business, Paying Taxes, Registering Property and Enforcing Contracts.

The Economic Survey calls for close coordination between the Logistics Divisions of Union Ministry of Commerce and Industry, Union Ministry of Shipping, Central Board of Indirect Taxes and Customs and the port authorities. There are some sectors that require a more focused approach such as the tourism sector, manufacturing sector and others.

The year 2019 marked the golden jubilee year of Bank Nationalisation. The Survey points out that the growth of Indian Banking Sector has not been proportionate with the overall growth of the economy. So far, only one Indian bank has made it to the list of Global Top 100 Banks. In 2019, a Rupee investment in public sector banks (PSBs) led to a loss of 23 paise on an average. The Survey calls for making PSBs more efficient through: 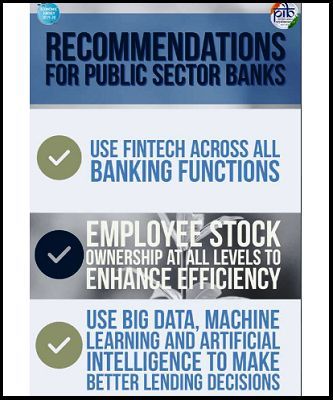 The Economic Survey 2020 calls for privatization to boost job and wealth creation. It examines the before and after the performance of over 10 CPSEs that underwent strategic disinvestment. The Strategic disinvestment in BPCL has led to an increase of over Rs. 30,000 crore wealth in India. Collectively, the net profit, net worth, return on assets (ROA) & equity (ROE) have improved notably. The more aggressive disinvestment is suggested for higher profitability.

Thalinomics: Economics of Plate of Food in India 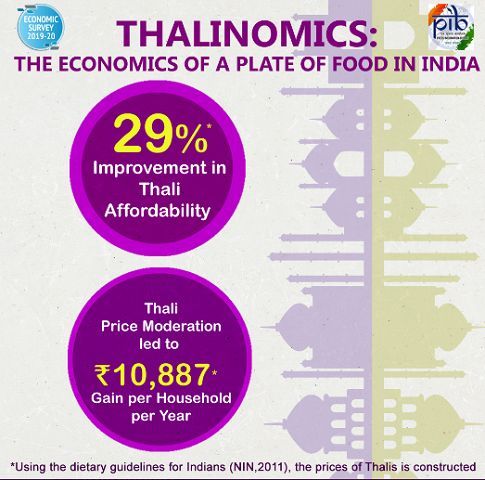 - The major drivers of CPI inflation in 2019-20 were food and beverages, particularly vegetables and pulses

- The Survey acknowledges that India is rightly moving forward on the path of Sustainable Development Goals (SDG) implementation. The states like Himachal Pradesh, Chandigarh, Kerala, and Tamil Nadu came out as front runners in SDG India Index 2019.

- Apart from this, India hosted COP-14 of UNCCD which resulted in the adoption of “Delhi Declaration”

- India strongly committed itself to implement the Paris Agreement at COP-25 of UNFCCC at Madrid, Spain.

- One of the major concerns is still burning of agricultural residues that lead to high pollution levels and deteriorates air quality.

- The Economic Survey states that the largest proportion of the Indian population depends on agriculture for job opportunities. However, the share of agriculture and allied sectors in Gross Value Added (GVA) of India is continuously declining due to higher growth of non-agricultural sectors.

- Livestock sector has grown at 7.9% CAGR in the last five years. The income from Livestock has become a secondary source of income for rural families.

- The Survey stresses on the sustainability of food security by addressing the growing food subsidy bill and revising the rates and coverage under NFSA. 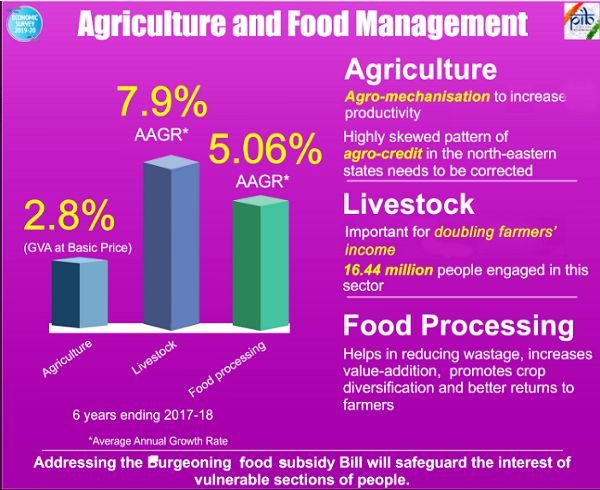 - Over 119 crore telephone connections were provided until September 2019 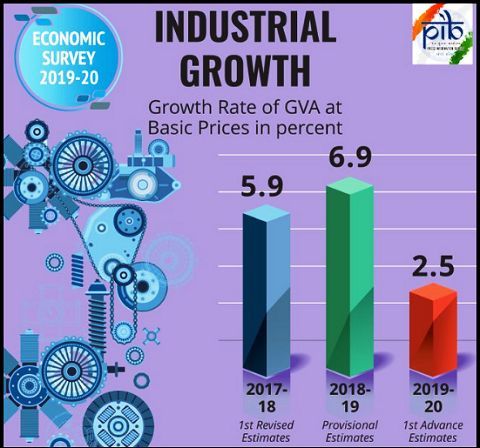 - The Government’s expenditure on social services such as health & education as a proportion of GDP increased to 7.7% in 2019-20.

- Gender disparity widened in the labour market due to a decrease in the female labour force.

- Over 3.30 crore children & 87.18 lakh pregnant women have been vaccinated under Mission Indradhanush.

- In terms of houses, over 76% of households in rural and 96% in urban areas had pucca houses.

Theme: Shifting gears with Investment as a key driver

The Economic Survey 2019 was focused on achieving Prime Minister Narendra Modi’s vision of USD 5 Trillion Indian Economy. The last year survey called for the adoption of behavioural economics to “nudge” people towards expected behaviour. The Survey 2018-19 projected the GDP growth at 7% for 2019-20. To achieve this growth, the Survey depicted Private Investment as a key driver for the overall growth and job creation. For a detailed analysis of Economic Survey 2019, visit: