The twin launches aimed to check the IAF’s capability of hitting targets with pinpoint accuracy.

The Indian Air Force has successfully carried out the test-firing of two BrahMos surface-to-surface missiles. The missiles were launched from a mobile platform at Trak Island in the Andaman Nicobar islands.

The twin launches were carried out as a part of the Indian Air Force’s routine operational training. The missiles were fired on October 21 and October 22. This was confirmed by officials.

The test-firing aimed to check the IAF’s capability of hitting targets with pinpoint accuracy. The targets were at a distance of 300 km. 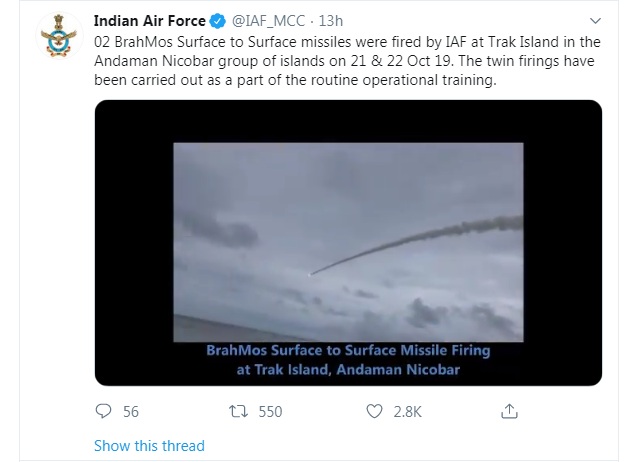 The IAF tweeted saying that the missile engaged the designated mock targets close to 300 Km away. The missiles were able to achieve a direct hit on the target in both cases. The IAF also stated that the launches have enhanced its capability of engaging the ground targets with pinpoint accuracy from a mobile platform.

The surface-to-surface missiles, weighing 2.5-tonne, have a range of around 300 km.

The various variants of the BrahMos missiles are produced by BrahMos Aerospace, which was set up as a joint venture between India and Russia.

BrahMos Aerospace produces missiles that can be launched from land, air and water platforms such as submarines, ships and aircraft.

The first BrahMos surface-to-surface variant was test-fired from the Integrated Test Range (ITR), Chandipur in June 2001 in a vertical launch configuration.

Another test was conducted in the same test range from a mobile launcher in June 2004.

Another BrahMos surface-to-surface missile was launched in March 2009, which successfully targeted and hit a building among a cluster of building in an urban setup. India is the only country with this advanced technology.

Further, BrahMos created a new world record in September 2010 by becoming the first cruise missile to be tested at supersonic speeds in a steep-dive mode.