Voyager-2 is a second human-made object to touch solar periphery out of the Sun's influence.

NASA or The National Aeronautics and Space Administration has added another feather in its cap as its Voyager 2 spacecraft has reached interstellar space. NASA's Voyager-2 has become the second spacecraft which has reached outside the periphery of the solar system. It has completed a long journey of over four decades to reach here. Earlier, only Voyager-1 of NASA reached near interstellar space.

Voyager-2 is a second human-made object to touch solar periphery out of the Sun's influence. According to researchers from the US University of Iowa, Voyager-2 has reached interstellar medium (ISM). According to the study published in the science journal Nature Astronomy, Voyager-2 entered ISM on November 5, 2019.

It was decided through readings based on plasma density. Plasma Wave Apparatus (PWA), mounted on the spacecraft, sent information about the atmosphere that helped the scientists to identify its actual location. Scientists found that the increased density of plasma is clear evidence of the spacecraft’s presence in a colder and higher plasma density. Interstellar space is a place where warm and low-density plasma of solar winds always remains. Similar plasma density data was found from Voyager-1 when it entered ISM. Voyager-1 crossed the solar periphery in 2012. 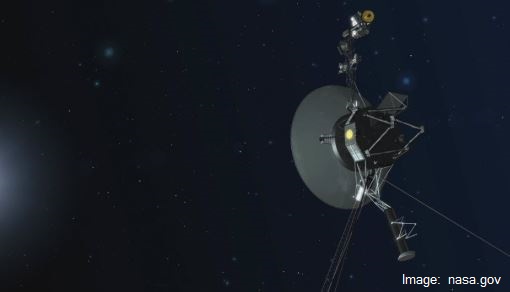 NASA’s mission scientists have found that the mission has crossed the end of the heliosphere on November 5. It was announced by assessing the data received from various instruments mounted on the spacecraft. This place is called heliopause where the weak, hot solar wind meets with the cold and dense solar winds. It is also called the end of the solar system. The magnetic range emanating from the Sun creates a gaseous atmosphere that extends far beyond the orbits of the planets. This magnetic field is called the heliosphere. Its shape is like a long wind cone and moves around the Sun. It was confirmed by the scientists through instruments mounted on Voyager-2.