National Waterway-2 is located between Sadiya-Dhubri regions of the Assam. It is a section of 891 km long stretch. 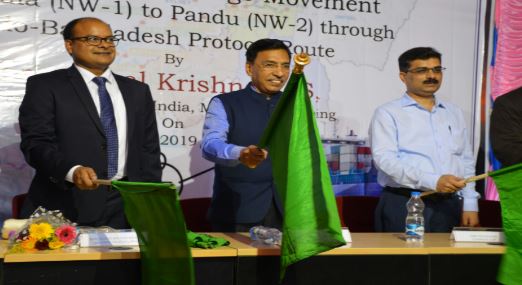 Benefits of National Waterway-2 Voyage
• It is the first container cargo movement on this Inland Water Transport (IWT) route.
• This 1425 km long movement is expected to establish technical and commercial feasibility of IWT mode using these diverse waterways.
• The purpose of this latest cargo movement is to promote the industrial development of the North East region by opening an alternative route for the transportation of raw materials and goods.

What is India-Bangladesh Protocol (IBP)?
• IBP is an inland water transportation and trade protocol signed between India and Bangladesh. It allows vessels of one country to transit through the specified routes of the other country.
• The existing protocol routes between India and Bangladesh are - Kolkata-Pandu-Kolkata, Rajshahi-Dhulian-Rajshahi, Pandu-Karimganj-Pandu and Kolkata-Karimganj - Kolkata.
• Apart from the above, India and Bangladesh have taken major steps in recent times to increase the use of waterways.
• An agreement has been signed by both countries to facilitate the movement of goods from India through the Chittagong and Mongla ports in Bangladesh.