Indore was adjudged as India's Cleanest City for the third consecutive year in the central government's cleanliness survey, while Bhopal was named as the ‘Cleanest Capital’ of India. Indore reported a 70 percent drop in vector-borne ailments in 2019, which is being attributed to Swachh Bharat Abhiyan. 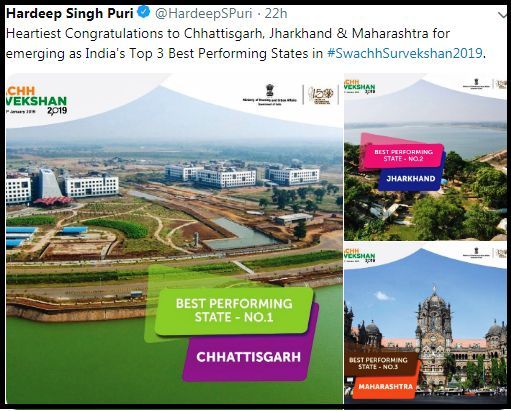 Winners were awarded with a statue of Mahatma Gandhi as memento.

• Indore awarded as Cleanest City; Ambikapur in Chattisgarh was acknowledged as the second India's Cleanest City overall and became a role model for other towns in the state, followed by Mysuru as the third cleanest city.

• Gujarat’s Ahmedabad was named as the Cleanest Big City in the population category of more than 10 lakh people.

• Ujjain bagged the award for being the Cleanest Medium City in the population category of 3 lakh to 10 lakh.

• The New Delhi Municipal Council area was given the 'Cleanest Small City' Award, and Uttarakhand's Gauchar was bestowed as the 'Best Ganga Town' in the cleanliness survey.

• Since the launch of the Swachh Bharat Mission in 2014, the urban areas of 23 states and UTs have become Open Defecation Free (ODF).

• Over 94 percent cities are already ODF.

• Google Toilet Locator: More than 42,000 public toilet blocks across 1400 cities have been mapped and are visible on Google Maps. The locator provides an option for citizens to provide their feedback after using the toilets.

• Waste processing has gone up to 52 percent, which was mere 18 percent at the start of the Mission.

• 93.1 percent of households in Rural India were found to have access to toilets during the survey period

• 90.7 percent of villages which were previously declared and verified as ODF were confirmed to be ODF