Aquatic Biome is a major biotic community of maritime characterized by the dominant forms of plant life and the dominating climate. It is biggest biome in the world because it covers around 70% of the earth. In this article, we are giving detailed information about the aquatic biomes of the world, which is very useful for the competitive examinations like UPSC-prelims, SSC, State Services, NDA, CDS, and Railways etc. 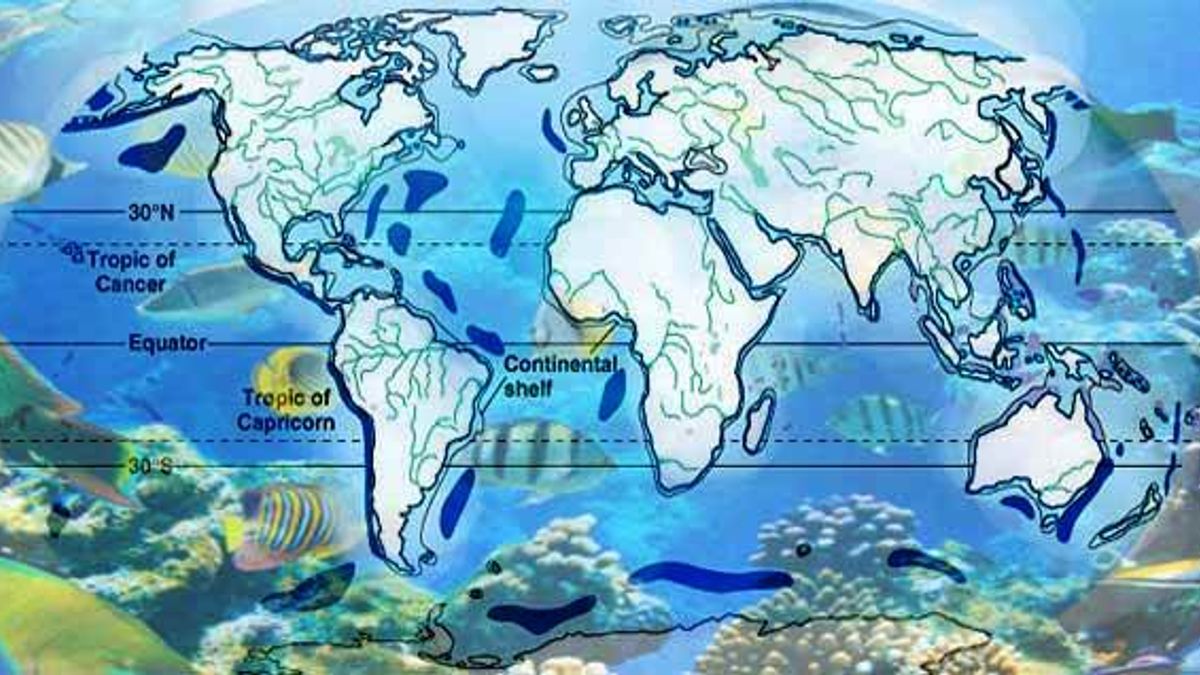 Biome refers to as a major biotic community characterized by the dominant forms of plant life and the dominating climate. Aquatic biome is biggest biome in the world because it covers around 70% of the earth. It is an important biome because this is where life began billions of years ago when amino acids first started to come together. There are five types of aquatic biome which is discussed below:

It is naturally occurring water on Earth's surface. The water of ice sheets, ice caps, glaciers, icebergs, bogs, ponds, lakes, rivers and streams, and groundwater are freshwater because these water bodies characterised by having a low concentration of salt and other dissolved solids. Lake Baikal is the largest freshwater lake by volume in the world, containing 22–23% of the world's fresh surface water. Plants and Algae are important to freshwater biomes. This biome is important for the human survival because it provides water for drinking and energy.

A wetland is a land area that is saturated with water, either permanently or seasonally, such that it takes on the characteristics of a distinct ecosystem. Freshwater wetlands are ecosystems that are affected by the permanent or temporary rising of a body of water and it's overflowing onto normally dry land. It plays an important role in the regulation of water flow, water quality to whole catchments. It is also an important factor for the habitation of fauna and provides refuge for fauna during droughts. The marsh, bog, fen, swamp, mire, slough, and prairie pothole are different types of freshwater wetlands. Cattails and sedges are common plants that grow up from the soil, through the water. All types of amphibians like frogs, toads, salamanders etc. are found in this biome.

List of local names of shifting cultivation around the world

It includes five main oceans: the Pacific Ocean, Atlantic Ocean, Indian Ocean and Arctic Ocean. It is one of that biome which helps in the life process by influencing the terrestrial climate, weather of the place; provide rain for crops through evaporation and circulation of air through waves and currents.

Corals are marine colonial polyp characterized by a calcareous skeleton. Coral reefs are formed due to the accumulation and compaction of the skeletons of these lime secreting organisms. It is found in the clear tropical ocean entirely between latitudes 30°N and 25°S. There are three types of coral reefs- fringing reefs, barrier reefs, and atolls. It is the most diverse ecosystems on the planet and also considered the medicine cabinets of the 21st century because several medicines are developed to treat cancer, arthritis, human bacterial infections, Alzheimer’s disease, heart disease, viruses, and other diseases. Hence, it is very necessary to protect the coral bleaching which is happening due to environmental degradation.

It is an area where freshwater of river mixes with the salt water of the sea. It is transition zone between river environment and maritime environment. There are four types of estuaries – Coastal plain estuaries, Tectonic estuaries, Bar built estuaries and Fjord estuaries. It is the home to unique plant and animal communities that have adapted to brackish water. For Example: Fish like salmon and sea trout; migratory bird populations, such as the black-tailed godwit.