The United States is among the countries whose economic growth now rests only on the sale of arm and ammunition. USA instigates two neigbouring countries and then sells arms to both of them. This fact can be observed in the case of India and Pakistan.

Following this policy, the USA has given fourth-generation F-16 advanced fighter aircraft to Pakistan. But now India has also received the first batch of 5 Rafale aircraft from France.

Now many people in the world including India and Pakistan want to know which fighter aircraft is better between Rafale, and F-16?

Let's know in this article which jet is better between F-16 and Rafale, but before that, it is important to know a bit about these two fighter jets.

About F-16: The F-16 is the world's most successful, war-proven fourth-generation multirole fighter Jet. Its production was started by the USA in 1973.

There are more than 4600 units of this single-engine aircraft (F-16) have been built and currently, 3000 units are still in service.

About Rafael:- Rafael is a multilayer fighter aircraft with two engines. This 4.5th generation fighter aircraft is made by the French company Dassault Aviation. Rafale can also be used for anti-nuclear strikes, anti-ship strikes, and in-depth operations. Its maximum speed is 2222 km/hour at high altitude. 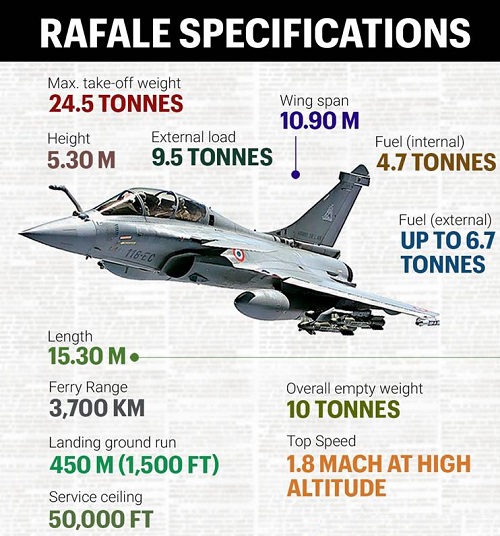 There are 201 units of this fighter aircraft have been built since 1986. A gun fit in Rafale is capable of firing 2500 bullets in a minute, which makes it a very deadly fighter jet.

The Meteor missile-equipped in the Rafale can hit the F16 jet from 150 KM distance in the air to air standoff, while the F16 will do so with the help of Amraam missile from the distance of 100 KM. So Rafale has an advantage of 50 KM. over the F16.

The comparative study done in this table shows that the Rafale aircraft is better than F16 on many parameters.

To read more such articles, click on the link below;

Who is more powerful in the defense sector between India and China? A comparative study