About Election commission of India:

The constitution under article 324 provides for an Election Commission for the superintendence, direction and control of the preparation of the electoral rolls for the conduct of elections to parliament, state legislatures and to the offices of president and vice president. Thus, the Election Commission is responsible for both the center’s and the states’ elections.

The constitution provides for the following provisions in relation to the composition of the election commission:

5. The conditions of service and tenure of office of the election commissioners and the regional commissioners shall be such as the President may by rule determine. 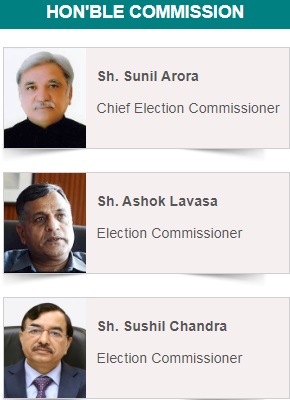 The Chief Election Commissioner and other election commissioners hold office for 6 years or till they attain the age of 65 years, whichever is earlier. They can resign at any time by addressing their resignation to the president. The president can remove any of the commissioners following the procedure provided in the constitution.

The powers and functions of the election commission are mentioned below:

1. It determines the territorial area of the electoral constituencies in accordance with the Delimitation Commission Act.

2. It prepares the electoral rolls and revises them from time to time. It registers all the eligible voters.

3. It prepares and notifies the schedule of the election.

4. It receives and scrutinizes the nomination papers from all the candidates in the elections.

6. It provides the status of national or state parties to the political parties on the basis of their performance in the elections.

7. It acts as the court to look into disputes regarding the recognition of political parties and allotment of symbols to them.

8. It appoints officers to enquire into disputes relating to electoral arrangements.

9. It prepares the time table for the publicity of the policies and programmes of political parties through TV and radio.

10. It ensures that the model code of conduct is followed by all the political parties and all the candidates.

11. It advises the president on matters relating to the disqualification of the members of the parliament.

12. It advises the governor of the state on matters relating to the disqualification of the members of the state legislature.

13. It requests the president or the governor for the necessary staff required for conducting elections.

14. It supervises election machinery and the conduct of elections to ensure free and fair elections.

15. It cancels polls in the event of irregularities and wrongdoings during an election.

16. It advises the president whether the elections can be held in a state under president’s rule.

So this was the complete information about the Composition, Tenure, and Functions of the  Election Commission of India. This topic is very important for various competitive exams to be held in the future.

What is the Election Model Code of Conduct?